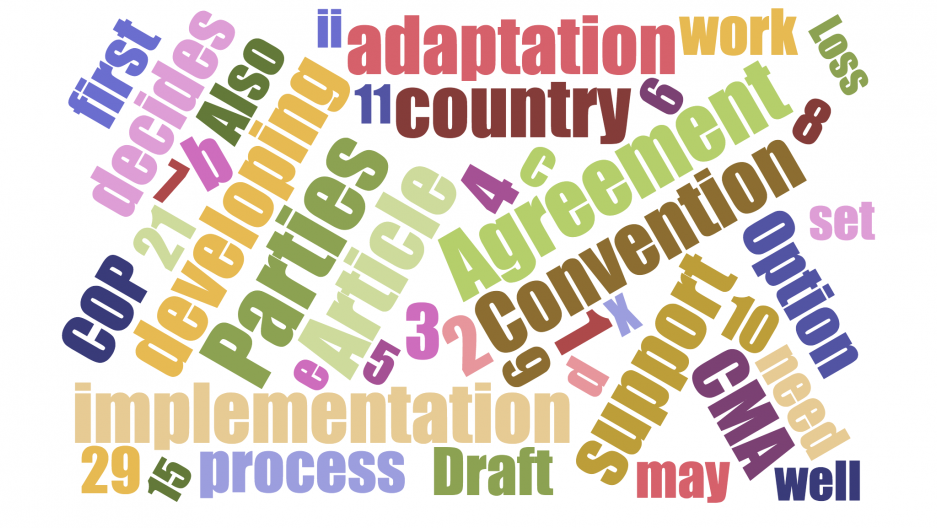 Wednesday was an exciting milestone in the Paris climate talks: After some delays, a slimmed-down draft agreement was released, this time a mere 29 pages long.

That represents painstaking progress over 10 days. Going into the talks to curb climate change on Nov. 30, the draft in front of delegates from nearly 200 countries ran to 54 pages. It was described as "the most complicated international agreement ever attempted." It certainly looked like it, packed with brackets and so many verb choices some paragraphs read like a thesaurus.

A first pruning got the tome down to 48 pages. High-level talks headed by French negotiators this week cut out nearly 20 more.

So, what's changed? In short, some decisions have been made about what, exactly, all of these parties are agreeing to: which emissions will be cut, how, and by whom; how sustainable alternatives will be developed, where; and of course, who will pay for it all.

Much of the bulk in previous drafts has come from the long lists of wording options written into the text. They were marked by hundreds of sets of brackets (h/t Slate), and negotiators were haggling over them all.

Getting the whole world to agree on anything is a challenge, so you may have guessed there are still some brackets left. For example, parties have yet to settle how to state the main purpose of the agreement, although it's well understood that reducing carbon emissions and controlling global warming are key. There's also an ambition for the agreement to be legally binding for all parties — which would be a big step from previous treaties — and to secure commitments for how its goals will be funded.

Here's a look at some of the most fraught options still on the table.

How hot is too hot? Water droplets fall from a melting ice block harvested from Greenland and installed on Place du Pantheon in Paris on Dec. 3, 2015, as the World Climate Change Conference 2015 continued near the French capital.

You may have heard of the 2-degree Celsius ceiling. That's the average rise above pre-industrial global temperatures scientists think we can tolerate without serious climate catastrophes.

There are currently three options on the table for how the agreement will phrase this critical pledge.

"...hold increase in the global average temperature to

Sounds like a tricky choice. Countries vulnerable to rising seas and extreme drought understandably want the 1.5-degree limit. But respecting the 2-degree ceiling will already be a huge challenge. Staying under 1.5 would require economies around the world to get rid of fossil fuels even more quickly. A chimney billows smoke from a coal-burning power station behind pedestrians walking across a bridge in Beijing on Dec. 14, 2010. A senior Chinese diplomat said that year that China would insist on keeping its greenhouse gas output free of any binding climate treaty fetters. Times have changed.

Whether parties will put a number on overall emissions reductions, and what that number will be, is also still being discussed. Wednesday's draft has the "collective long-term goal" down to two choices, sort of (note the brackets):

It won't be easy to get everyone making decisions "informed by best available science, on the basis of equity and in the context of sustainable development and poverty eradication." But putting that aside — Option 1 here adds the accountability of percentage targets, along with a possible mid-century deadline for cutting fossil fuel use. Option 2 would leave industries and nations twice as much time to cut back.

You break it, you buy it Then there's the financing. Who's going to pay for all these new sustainability measures remains a key issue under negotiation, and developing countries believe developed nations should foot most of the bill. As AFP notes, "Coming into the Paris talks, developing countries were already assured of receiving $100 billion (91 billion euros) in climate finance per year from 2020, a pledge dating back to the fraught 2009 climate summit of Copenhagen. But all the details behind that headline figure were left to be worked out."

Here are some of the financing options now in front of parties under Article 6:

"2. Option 1: All Parties shall take action to mobilize, and/or facilitate the mobilisation of, climate finance from a wide variety of sources, public and private, bilateral and multilateral, including additional sources, as well as through facilitative policy frameworks, in line with their respective and evolving responsibilities and capabilities, with developed country Parties taking the lead, noting the significant role of public funds. [Some Parties may need support in order to take action.]
Option 2: Developed country Parties and other Parties included in Annex II to the Convention shall mobilize financial resources beyond their previous efforts, supporting country-driven strategies, and taking into account the needs and priorities of developing country Parties.
Option 3: As part of a shared effort, led by developed country Parties, Parties should cooperate to promote the mobilization of climate finance from a wide variety of sources, instruments and channels, including public, private, bilateral, multilateral, domestic, and international."

And on the all-important question of "scale": Is the annual $100 billion promised by developed countries a floor, or a ceiling?

"4. Option 1: The mobilization of climate finance [shall][should] be scaled up in a predictable and transparent manner [beyond previous efforts] [from USD 100 billion per year] from 2020[, recognizing the important role of the Green Climate Fund in the scaling up of financial resources for the implementation of this agreement, as well as other multilateral mechanisms and other efforts].
Option 2: The provision and mobilization of financial resources by developed country Parties and other developed Parties included in Annex II shall represent a progression beyond their previous efforts with clearly identified pathways to annual expected levels of available resources towards achieving short-term collective quantified goals for the post 2020 period to be periodically established and reviewed. Financial resources shall be scaled up from a floor of US$100 billion per year, including a clear burden-sharing formula, and in line with needs and priorities identified by developing country Parties in the context of contributing to the achievement of the purpose as defined in Article 2 of this Agreement. It shall take into account an equitable regional distribution of financial resources and a gender-sensitive approach, and include the implementation of Articles 5 and 6 of the Convention.
Option 3: As part of a shared mobilization effort Parties should, in accordance with paragraphs X-Y, enhance the scale and effectiveness of climate finance by: mobilizing climate finance from a wide variety of instruments and channels; provide, when in a position to do so, support to developing countries in need of support; appropriately prioritize support; improve enabling environments; integrate climate considerations into international development assistance; and reduce international support for high-emissions investments."

All of these options could still be turned upside down if the parties beyond the "high-level" cabal don't go for the trimmed-down version of the deal. It's happened before: one group of negotiators presents a new, shorter draft to all parties, and those who don't like the changes shove all their old demands back in.

"We saw [this] earlier this year at a previous climate meeting in Bonn when the co-chairs tried to come up with a shorter text and the response from parties was to re-insert all their favorite parts back into the text," one observer told the BBC.

That, ladies and gentlemen, is how the pre-Paris, 54-page draft came to be.

The talks will wrap up Friday, and it's hoped negotiators will ink a "close-to-final agreement" by Saturday. Meanwhile, Earth as we know it has never been hotter. The clock is ticking.