He was a World War I hero for the Germans.

He represented an upscale Lutheran flock in Berlin. He initially supported Adolf Hitler, but turned quickly.

His most-famous work — a poem about the dangers of complacency against rising authoritarianism — is as much confession as warning.

And now, more than three decades after his death, Martin Niemöller, is on the front-page of the New York Daily News. His words have been adapted in an attack ad from GOP presidential candidate John Kasich.

All because of Donald Trump — and the billionaire businessman's comments about Mexicans and Muslims. And journalists.

First, Niemöller's words, delivered in lectures in 1945 after his release from eight years in Nazi prison camps:

First they came for the Socialists, and I did not speak out—
Because I was not a Socialist.

Then they came for the Jews, and I did not speak out—
Because I was not a Jew.

Then they came for me—and there was no one left to speak for me.

Now, the New York Daily news adaptation, which includes an image of Trump with a beheaded Statue of Liberty:

"And you might not care that Donald Trump wants to suppress journalists, because you're not one. But think about this. If he keeps going and he actually becomes president, he might just get around to you, and you better hope that's there someone left to help you," he adds. 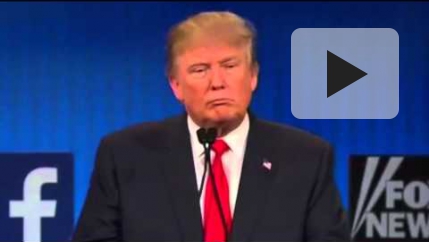 (Update: On Monday, Trump banned the "phony and dishonest" Washington Post from his campaign events, accusing the award-winning news organization of inaccuracy. The Post's expulsion followed announced Trump bans of Politico, BuzzFeed and the Huffington Post, as well as hateful remarks against journalists from the presumptive Republican nominee. Post Editor Marty Baron responded that the move represents "nothing less than a repudiation of the role of a free and independent press.")

Max Paul Friedman, a historian at American University, wrote in the Daily News that the Nazis' route to power was shaped by ''big lies" — akin to Trump's repeatedly untrue comments castigating Mexicans as rapists and Muslims as celebrating the 9/11 attack on the United States. He wrote:

...the Nazis had to come to power through elections by spreading fear, and promote anti-Semitism through incitement to make non-Jewish Germans turn on their Jewish neighbors. They did it in part through Nazi propaganda minister Joseph Goebbels' principle of the "big lie." Told often enough, it will be believed. Trump's repeated claims about New Jersey Muslims celebrating the 9/11 attacks and his desire to ban a billion people from entering the United States notwithstanding, he is nowhere near the Nazis' plans for a Final Solution. But he is not far from the first steps they took.

Niemöller's strength may come because of his flaws. He indeed was complicit.

He was decorated in World War I because his U-boat team caused such damage and killing to Allied shipping. His war record initially was cited by Hitler, who met with him. Niemöller, who became a pastor in 1924, even backed Hitler's run for power in 1933. The pastor even supported limits on Jews in government and, even from the pulpit, blamed Jews for the cruxifixion of Jesus.

But by September 1933, Niemöller saw where Hitler's rhetoric was going. Along with Dieterich Bonhoffer, later hanged by the Nazis, Niemöller formed a group opposed to the nazification of German Protestant churches. He vehemently opposed a Nazi effort to link church posts to Aryan heritage. Before the 1936 Olympics in Berlin, he and nine other ministers wrote a manifesto to Hitler — and smuggled it out of the country for widespread press usage. In it, they warned that Hitler was moving Germany away from the Kingdom of God:

“We must warn the Führer, that the adoration frequently bestowed on him is only due to God. ... Today his thoughts are used as a basis not only for political decisions but also for morality and law. He himself is surrounded with the dignity of a priest and even of an intermediary between God and man… We ask that liberty be given to our people to go their way in the future under the sign of the Cross of Christ, in order that our grandsons may not curse their elders on the ground that their elders left them a state on earth that closed to them the Kingdom of God.”

In 1937, he was charged with treason and narrowly escaped execution while imprisoned in Sachsenhausen and Dachau concentration camps from 1937 to 1945.

Niemöller, who later opposed the Vietnam war and nuclear weapons, was among the first to acknowledge the broader complicity of Germans in the Holocaust. He helped draft a postwar document acknowleging the help that Germans gave to the Nazis.

The US Holocaust Museum quoted him in his 1946 book, Of Guilt and Hope, as saying:

"Whenever I chance to meet a Jew known to me before, then, as a Christian, I cannot but tell him: 'Dear Friend, I stand in front of you, but we cannot get together, for there is guilt between us. I have sinned and my people has sinned against thy people and against thyself.'"