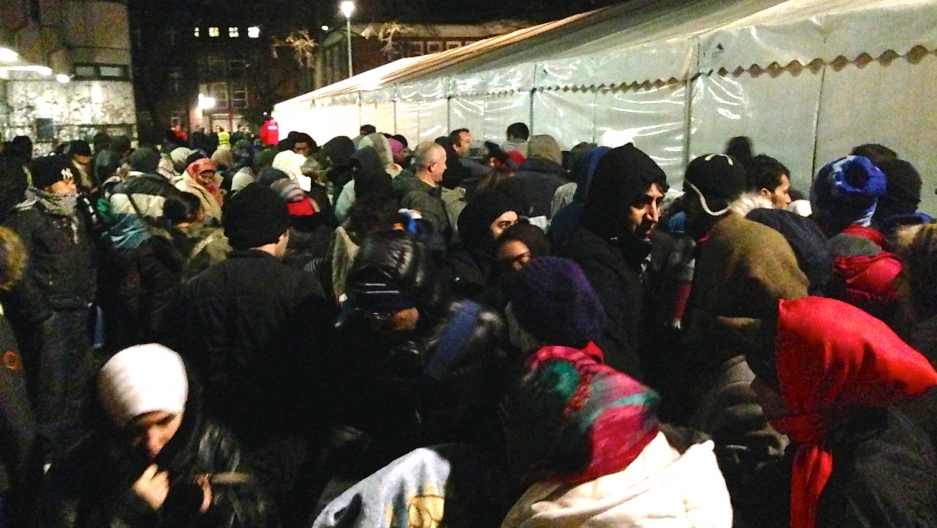 Every day for the last few months, around 800 refugees have been showing up outside this administration building in Berlin, hoping to advance their cases as asylum seekers. But the staff inside the Office of Health and Social Affairs can only see 300-400 per day, saying they are overwhelmed by the numbers of refugees.

Angela Merkel got some recognition Wednesday for her response to the refugee crisis. The German chancellor was named Time magazine’s “Person of the Year.”

“We can do this,” Merkel has said repeatedly, as hundreds of thousands of refugees have been pouring into Germany over the last few months.

Time’s editor Nancy Gibbs praised Merkel for “viewing the refugees as victims to be rescued rather than invaders to be repelled.”

But the chancellor is asking a great deal of the German public. And one place where that becomes immediately apparent is on a sidewalk in central Berlin.

It’s early evening in December, which means cold, dark and wet. Not a great night to be on the sidewalk until morning. But that’s just what a crowd of 100 or so people is doing. A few of them keep up their spirits with a little song and dance in Arabic.

They’re almost all young men. Most say they’re from Syria. But they’ve also come from Iraq, Afghanistan, Pakistan and Iran. And they’re here hoping to get an appointment inside a big city administration building.

“Appointment. Appointment. Everybody,” a man from Afghanistan tells me in halting English. “Tomorrow, go to inside ... for papers.”

When I ask how long he’s been trying to get a coveted appointment, he sayd, “I waiting one month and two weeks. And outside I sleeping.”

People are sleeping outside because they haven’t secured beds in a refugee camp or shelter. For them, and tens of thousands of other refugees in Berlin, the path to becoming an official asylum seeker under German law runs through this building, the Office of Health and Social Affairs.

For the lucky ones, things go smoothly and they spend a day or so navigating the bureaucracy inside. They’re given access to shelter and then monthly pocket money of about $160. Most importantly, this is key to starting the official process of applying for asylum.

But the crowds that gather on this sidewalk are a sign of just how overwhelmed Berlin is right now.

A man in his early 30s introduces himself as Hassan and tells me he’s from Iraq. He says he came to Germany with his 13-year-old son, who’s staying at a shelter for kids. Hassan says he’s been coming back most days of the week for two months trying to register unsuccessfully.

“Angela Merkel said, ‘Welcome, refugees,’” he says. “So, what’s with the holdup?”

Hassan says he’s been sleeping in restaurants or with friends, wherever he can. He’s out of money now, he says, because he paid smugglers $10,000 to help him and his son get here. His wife and daughter are still at a camp back in Turkey. They all had to flee the fighting in Iraq, he says. But at this point, he wishes he’d never made the trip to Europe.

“It’s an unbearable situation,” he says.

And he’s not the only one who feels that way.

A young guy who doesn’t want to give his name says he’s from Aleppo in Syria. He deserted the Syrian army, he says, but they confiscated his passport. He joined a rebel group, but deserted again to care for his family.

The man says ISIS tried to enlist him as a fighter. That was last straw, he says. He left Syria and made it to Germany. But waiting in line day after day with no idea of what comes next, is no way to live.

“I came here to work. If Germany doesn’t want us, they should just send us home,” he says.

Silvia Kostner is the government agency spokeswoman. She says her people just can’t keep up with the numbers of refugees showing up to register as asylum seekers.

“Our staff is doing the best [they can],” Kostner says. “But …we cannot do more.”

The scene is playing out in other German cities, too, Kostner says. But Berlin is facing an especially big challenge.

The German capital now has more than 120 refugee camps. At the current rate, Berlin is opening 1 or 2 gymnasiums in the city as shelters for refugees every single day. Kostner says it’s hard to know how long it will take for the bureaucracy to catch up, especially if the current rate of new arrivals keeps up.

At 5:30 a.m., the day after I spoke with men waiting in line on the sidewalk, the scene outside the main government agency building is confusing. There are several hundred people crowding around a big tent, which is being used for people to line up for entry into the administration building for an appointment.

Security guards are trying to keep things organized. But there is lots of frustration. One of the guys I had met the night before tells me his name, Siahvash, and says he’s from Iran.

Siavash says he was number 20 in line the night before, but when the gate opened at 4 a.m., the crowd surged and left him behind.

When I ask what he’ll do next, Siavash reaches out to shake my hand and he smiles.

He's not giving up, he says.