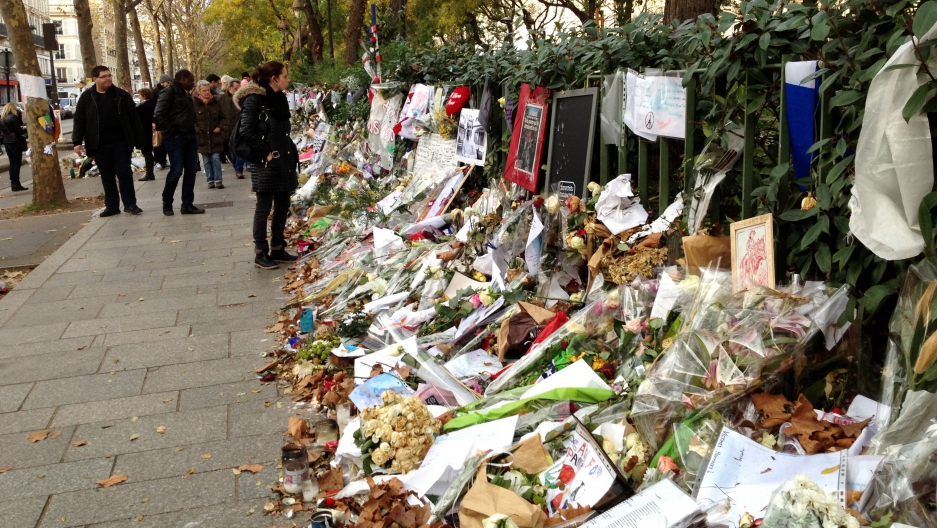 Parisians still flock to the Bataclan memorial site to remember those killed in the November 13 terror attacks.

Attentions in Paris have been divided over the past few weeks. The devastating November terror attacks and the big UN climate change negotiations just north of the city have simultaneously grabbed international headlines. Young Parisians sit front-and-center in both stories: as victims of the deadly shootings and activists pushing for carbon restrictions.

Today, 20-something Parisians have mixed emotions as the city hosts what could be a pivotal climate summit.

Marguerite Gouarne, a master’s student studying environmental policy in Paris, said she was in shock after the Nov. 13 attacks. For the first time, she felt unsafe in her own city.

“The first reflex was to stay home and be afraid, and I really got very anxious in the days after the attack,” Gouarne said.

But like many in Paris, Gouarne quickly decided not to hide, but to keep on living. For her, that meant planning side events and designing a booth at the UN climate change negotiation site just north of the city.

“I realized how important it was to go to Le Bourget even though I was scared at first,” Gouarne said. “First, it’s important to show that life goes on, and secondly, I think that the fact that the civil society is present here ... and that you see alternative solutions for the future, is something we needed after this shock.”

The Paris shootings made Gouarne think more about the contribution of changing weather patterns, like increasing drought and flooding, to civil unrest in some parts of the world.

“In a way, this attack made me realize that all of these problems are intertwined, and it’s even more important that we come to an agreement,” Gouarne said. “We are really experiencing a key moment for my generation more than for any other generation.”

Large demonstrations have been banned in Paris due to security concerns since the attacks, but over the weekend, a People’s Climate Summit organized largely by young activists went on as planned in Montreuil, an eastern suburb of Paris.

Damien Simonneau, a Ph.D. political science researcher at a local university, watched as a drum circle formed in a plaza at the summit site. He considers the security restrictions enacted by French authorities onerous, but thinks the government’s overall support of the climate negotiations has kept them on everyone’s radar.

“At the beginning of the attacks, for example, the first message by the president was like, we are not going to cancel the COP21,” Simonneau said, referring to the UN name for the climate summit. “It’s all around Paris, it’s been all around Paris for some months, and it’s on TV, it’s on radio, so I don’t think it has been taken away from.”

Simonneau sees both terrorism and climate change as equally important.

“(They have) been presented in France as the two main contemporary issues,” Simonneau said. “So I don’t think (the attacks have) overwhelmed everyone, the people are not only talking about security.”

Both Simonneau and Gouarne were tuned in to climate change issues before the Paris attacks. The view seems a little different from the perspective of young French people who weren’t paying as much attention, people like 21-year-old Kevin Kaeng.

“I think people are more focused on the terror attacks, because they are more concerned about it, and the climate, it’s more about the future,” Kaeng said while relaxing at a park in central Paris on Sunday.  “I think people don’t really care that much of the environment.”

That idea that climate change is mostly a problem of the future is something many at the climate summit are pushing back against as they try to reach a breakthrough agreement this week. But in a city where recent events still feel all too present, it’s feeling hard for people on the street to ignore.

Evidence of the tragedy still lingers in the city. Armed guards patrol the streets and subway stops. Across from the Bataclan theater, where 89 people were murdered in the November attacks, an informal memorial of flowers and tea candles has been set up on the sidewalk.

Art student Charline Delhommeau walked by slowly over the weekend, looking at photos of the victims posted on a fence. Right now, she said, a changing climate feels like a very distant issue.

“We have to think about it because it’s really important for the future, but I think at the moment it’s more important to think about the people who died in the Bataclan, in the streets,” Delhommeau said.

“It’s really difficult today to think about all we have to.”