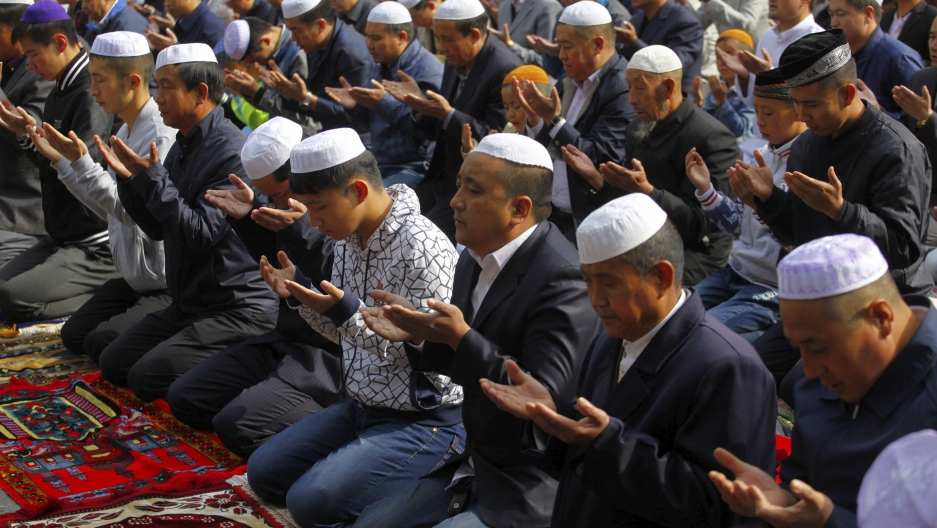 Muslims attend a mass prayer at the Dongguan Great Mosque, in Xining, Qinghai province, China. ISIS has a song in Mandarin calling on Chinese Muslims to join the jihad.

If you didn't know better, listening to the new song "I am Mujahid," you'd think you were listening to a soothing chant. But it's anything but.

ISIS, through its media arm, Al-Hayat, released the propaganda song in Mandarin for a Chinese audience — Chinese Muslims, specifically.

It talks about "dying fighting on the battlefield as our dream. It talks about a century of slavery, which leaves a shameful memory," says Isaac Stone Fish, Asia editor at Foreign Policy Magazine. The lyrics were translated by the Wall Street Journal.

The terrorist group is trying to reach China's Muslim minority. There's anywhere from between 20 to 30 to maybe even more million Muslims in China, mostly in the country's vast northwest region of Xingjiang," he says.

There's the Uighurs, who speak a Turkic language, and the Huis, who speak Mandarin and are "less radical than other Muslim groups in China," says Stone Fish. By singing in Mandarin, ISIS might be directing the song to the Hui,s so as to "wake up and join this consciousness. "

"They know that they're not going to get thousands of Muslims leaving China and coming to Syria and Iraq to train and fight," but even attracting a handful of recruits would be considered a public relations coup.

The release of "I am Mujahid" comes weeks after Islamic militants executed Chinese citizen Fan Jinghui. He was the first known Chinese national to be killed by the group — drawing a rebuke by President Xi Jinping who also threatened to hold ISIS accountable.