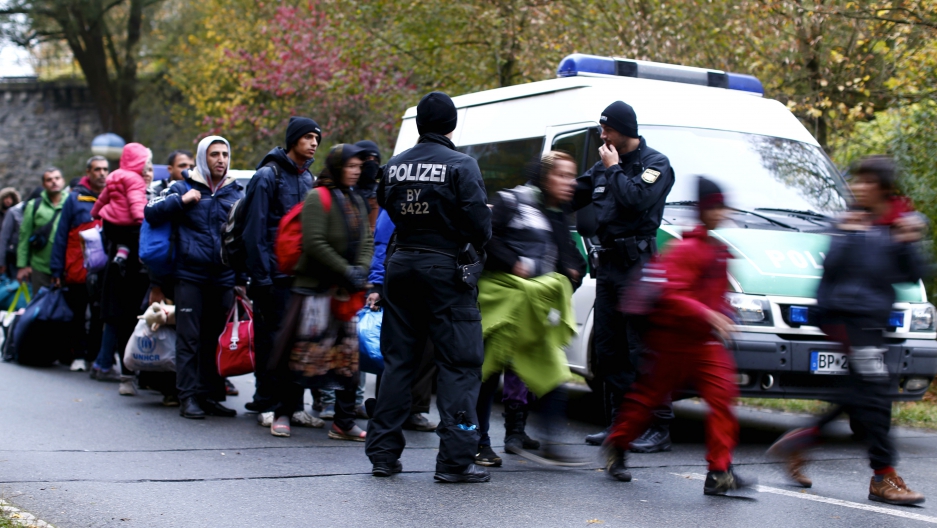 Newly arrived migrants are cleared by German police officers after crossing the Austrian-German border from Achleiten, Austria, into the city of Passau, Germany on October 29, 2015.

President Obama ignited something of a political firestorm when he proposed opening up America’s doors to 10,000 people from war-torn Syria.

Germany — whose population is about one-fourth the size of the US — is wresting with the very same issue, but on a much different scale.

An estimated 1.5 million people - Syrians, along with Iraqis, Afghans, Iranians, and others — have already crossed the border into Germany. And the question that many Germans are asking now is, how long should this be allowed to continue?

At the train station in the Bavarian city of Passau, they keep coming. The station is one of three major entry points for refugees coming into southern Germany from across the border in Austria. In recent days, the numbers new arrivals have been way down. But no one thinks this will last long.

“We have 6,000 immigrants per day,” says Mark Matthies, a member of the German national police. “This is a situation I’ve never seen before.” 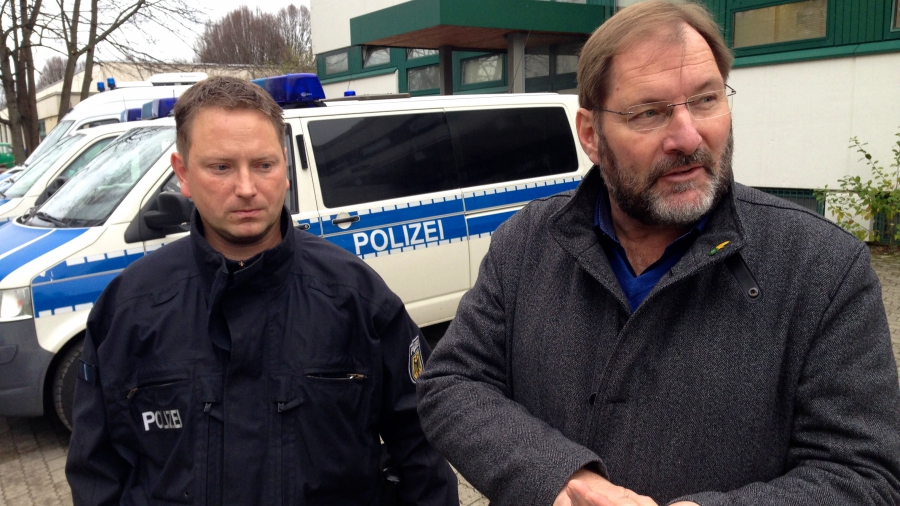 Matthies is the commander of a riot police battalion in the capital, Berlin. But for the past 12 weeks, he’s been running a registration center for refugees in the Bavarian city of Rosenheim, about two-hour’s drive from Passau.

In the last few months, Matthies says, his officers have registered a total of 115,000 refugees in a converted warehouse and gymnasium that now operate as an intake center for new arrivals. They show up here in buses that come straight from the train station and the refugees spend between 4 and 12 hours being processed as new asylum seekers.

The process begins with a short medical screening in a cramped office that has an overwhelming smell of sweat, just a hint of how far these refugees have come and how difficult their journey must have been for many of them.

After the medical check, police search the new arrivals for weapons. They take away their cell phones and copy the data from them. They take fingerprints and then do a short interview to find out where the refugees are from and why they’ve come to Germany.

Officer Ringo Schimmelpfennig conducts the interviews at a desk with a photocopy of the Eiffel Tower peace symbol on the wall. He says it’s hard to verify people’s identity.

Schimmelpfennig says some refugees show up with passports. But most don’t. During the summer, when the current wave of refugees was getting started, police say most of the people coming to Germany were Syrian families with money. Lately, they say more than half of the refugees are poor young men traveling alone. Many are illiterate.

Jörg Radek, spokesman for Germany’s national police, says he’s getting a lot of questions and complaints from the ranks. Officers wonder why they’re being asked to do the work of customs officials and the Red Cross, instead of practicing law enforcement.

They declined to speak on the record about it, but several police officers told me they are very skeptical about how all this will turn out. One officer told me that Germany is making a big mistake by letting in so many people straight from the conflict zones of Syria, Iraq and Afghanistan.

“They will never integrate here in Germany,” the officer said.

Christina Bach, a plainclothes officer at the train station in Passau, says her team could not manage without help from hundreds of civilian volunteers who’ve been showing up every day to lend a hand. In all, she reckons more than 2,000 volunteers have stepped in to help. They come to the train station to hand out food, water and clothes.

But it’s not clear how long everyone can keep up this pace.

At police headquarters in Passau, another bus full of refugees arrived from the train station full of families with young children. One exhausted-looking little girl told me they had come from northern Iraq. Off-duty officer Wolfgang Strahberger was standing by, having a cigarette. I asked him how the scene made him feel.

“You see the kids. I’m a father,” he said, noticably moved. “It’s sometimes very difficult to see this.”

Sometimes, Strahberger gestured with his hand, he can’t hold back the tears when he sees refugee families stepping off the buses.

When I asked him if he thought Germany is doing the right thing by welcoming so many refugees, he answered without hesitation.