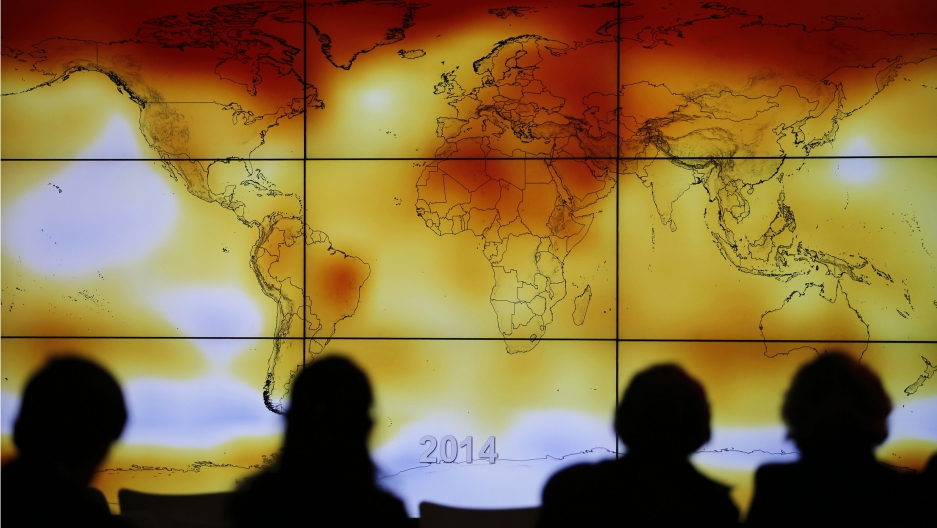 Participants view a world map with climate anomalies during the World Climate Change Conference 2015 (COP21) at Le Bourget, near Paris. The conference is charged with producing a consensus agreement between 195 countries to limit the dangerous warming of the earth's atmosphere from greenhouse gas pollution.
Credit:

Soldiers and heavily-armed police patrol the train stations and subways. The anti-immigrant National Front scored big gains in Sunday’s French elections. Many in Paris, and France in general, are feeling very much under siege just weeks after the Nov. 13 attacks by ISIS militants. But at the global Climate summit in a massive conference center just north of the city, it’s all about trying — trying — to bring the world together.

As with fighting terrorism and the forces that contribute to it, getting a global agreement that will mark a significant turning point in the climate crisis is a steep hill to climb. But the feeling here — even amid stark differences among the 195 countries represented — is that after the failure in Copenhagen in 2009, after six more years of surging emissions and six more years of ever-clearer science and the ever-starker reality of climate change, no one wants to let this moment slip away.

At the start of Week Two an agreement is still hundreds of brackets away — the brackets being the still-contested sections of the 40-plus page draft agreement circulated over the weekend by the French conference hosts.

But the gist of those question marks comes down to a handful of basic issues.

—What’s the target for limiting warming?

In 2010, member countries agreed to try to hold global temperatures to a rise of no more than 2 degrees Celsius, or 3.6 degrees Fahrenheit, over pre-industrial levels by the year 2100. But that target was controversial even then, and new science since has made it clear that 2C will still be disastrous for much of the world. So there’s a big push here for a 1.5C target.

And on Monday, the US’s top negotiator, Todd Stern, told reporters that the goal is “to hold temperatures to as far as possible below 2 degrees or something like that,” and that the US was working with other countries on “some formulation that would include reference to the 1.5 degrees.”

Not quite an endorsement of the 1.5C target, but an indication that it’s certainly in play.

—Aid to developing countries in fighting and adapting to climate change.

Developing countries argue that since the developed world got rich through unconstrained use of dirty energy, they should pay to help poor countries convert to clean energy and deal with the climate impacts of all that pollution. Developed countries largely agree in principle, but the devil is in the details: Who pays—governments, the private sector, or both? How much, and to whom? When, and for how long?

—Targets, transparency and the ratchet

One very big change since the last major climate agreement — the 1997 Kyoto Protocol — is that all countries have agreed in principle to taking action to limit their emissions, not just the world’s rich. That old “polluter pays” provision in Kyoto was based on the stark reality of who was largely responsible for the problem, and who could best afford to pay to address it. But it was politically DOA in the US and several other rich countries.

Under the new approach, most of the member countries here have already submitted specific pledges for action to curb greenhouse gas emissions. But even with the new consensus in principle, there are huge questions about who should do how much, when they should do it, and how those pledges and actions will be monitored and verified.

Just as important is the fact that all of the pledges so far come nowhere close to meeting even the 2C target for limiting warming, much less 1.5. So Negotiators are haggling over a process to have countries revise their pledges—what some are calling “ratcheting up” their commitments — periodically as technology, economic conditions and climate impacts themselves change over the next couple of decades.

Many, if not most countries here want whatever agreement comes out of the summit to be binding on all 195 members. Certainly most activist groups circulating here want that. But the US and a number of other countries have resisted a fully binding deal, some for domestic political reasons, others out of principle—they don’t want to be locked into something that could limit their economic development.

Before the summit began, the US endorsed a proposal by New Zealand to split the difference: make the accountability and transparency sections — the way emissions are reported and monitored — binding, but not the pledges themselves.

The US argument is that this will allow otherwise reluctant countries to make specific emissions pledges if they know they won’t be sanctioned for missing their targets. Such an approach might also be less politically vulnerable back home in Washington. Whatever its merits, a consensus does seem to be forming around this approach.