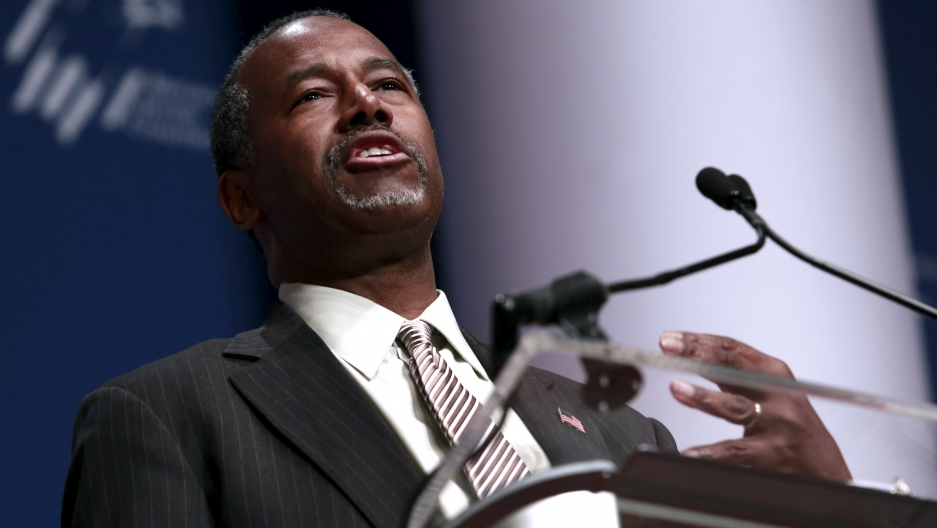 The Africa trip was Carson's latest attempt to burnish his foreign policy credentials, coming on the heels of a visit to Jordan last month in which he met with Syrian refugees. It was also an opportunity to talk up his personal and professional ties to the continent. But less than two weeks after it was announced, the trip was canceled, citing security concerns.

"I think it'll make me look smart to not go into some place where there's a lot of danger," he told the press in Las Vegas.

Carson, who has shed popularity in polls of Republican voters, has admitted his campaign for the presidency may be flagging due to a lack of foreign policy experience. On international affairs he has made several embarrassing blunders, including pronouncing Hamas like "hummus."

When the trip was first announced, Carson had told US radio host Hugh Hewitt that he would visit Kenya because of his ancestral connections to the area, noting that "my ancestors are from the Kenya-Tanzania region, the Turkana tribe."

"I’ve had all of that traced back," he added.

While some Kenyans expressed excitement about the prospect of another American president with Kenyan roots, others quickly pointed out that the Turkana people traditionally live in Kenya's northwest — far from the country's border with Tanzania.

#BenCarson should visit Kenya but he should get his geography right. Turkanas are not in #Tanzania .Quite a goofy fellow!

Ben Carson should stick to America. If his alleged ancestors were Turkanas then they should be on the Kenya-Ethiopia NOT Kenya-TZ border!

It wasn't the first time Carson has brought up his Kenyan background: Earlier this year, while defending his comment that Obamacare was the worst thing since slavery, Carson said he had a Turkana ancestor.

His planned trip to Kenya would have followed a high-profile tour by Pope Francis last month, as well as President Barack Obama's visit to his father's homeland in July.

Another Kenyan (Turkana) descendant running for US President!! https://t.co/mEusved4S5

Honestly is Ben Carson trying to ride on this whole Kenyan vibe I know we are very awesome people but Ben come on you can't be from Turkana.

In addition to Kenya, Carson had planned to visit Zambia because of his connection to formerly conjoined twins Joseph and Luka Banda. Carson was famously part of a surgical team that successfully separated them in 1997.

"They were joined at the top of the head facing in opposite directions almost 18 years ago and this is the year they graduate from high school," he told the radio show.

In Nigeria he was due to visit a medical school named after him, and had plans to learn about the Nigerian economy as well as the Islamist militant group Boko Haram.

More from GlobalPost: These are the real victims of Boko Haram

"I want to get an idea from the people what the effects of the Boko Haram are, what people are thinking, to see what the economic situation is there," he said earlier.

Carson said that being able to "see things firsthand" would help him "make decisions based on real information as opposed to filtered information."

"I think a lot of our policy in the future is going to affect Africa," he declared.

Looks like the firsthand information will have to wait for now.