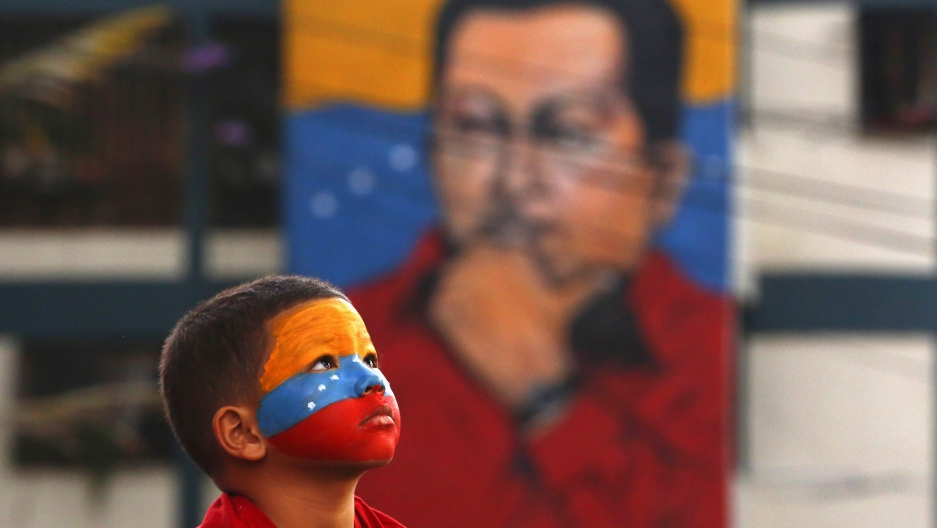 A young Hugo Chavez supporter photographed outside his mausoleum in March 2014, a year after the Venezuelan leader died.
Credit: Jorge Silva
Share

LIMA, Peru — Few leaders have ever had the ability to polarize opinion quite like Hugo Chavez, Venezuela’s late bombastic, left-wing president.

The same is true of Chavismo, the “Bolivarian” socialist movement he founded and which on Sunday lost a major election for the first time since sweeping to power in 1999.

But if there is one thing that left and right in Latin America now appear to agree on when it comes to Venezuela, it's that the opposition’s landslide triumph in the legislative elections, by 99 seats to 46 according to partial results on Monday, is a truly historic event.

There remain 22 seats where the results are still too close to call. Should the opposition win at least 12 of them, it would have the super majority required not just to investigate the government or free political prisoners, but to pave the way for a recall referendum of Chavez’s political heir, President Nicolas Maduro.

The center left Peruvian newspaper La Republica — a consistent critic of Maduro’s authoritarian turn — summed up the conclusion of many on Monday with its frontpage headline blaring: “The beginning of the end for Chavismo.”

Inside, it was no less emphatic. In a double-page spread titled “Historic 6D: Venezuela turns its back on Chavismo,” the paper reported how government candidates were booed and heckled as they went to vote on Sunday. 6D refers to the date of the poll, December 6.

Meanwhile, Bolivia’s president Evo Morales, long one of the staunchest allies of Chavez and Maduro, admitted that the results called for a “profound reflection” about how best to “defend democratic revolutions.”

That reference to democracy could — just possibly — be taken as opening up a little distance between Morales and Maduro, given what many view as the Venezuelan president’s disastrous handling of his nation’s economy and repressive response to criticism.

More from GlobalPost: Why Latin American governments don’t want to fight with Caracas

But Morales also didn’t miss the chance to attack the United States, adding: “The empire is conspiring once again and what we are seeing now, the economic aggressions, the economic wars, have the result that the empire can once again have geopolitical control of our region.”

The president of Nicaragua, however, a key leftist ally of Venezuela, wouldn’t budge in his belief that Chavismo will continue.

"As difficult as the horizon seems, we have no doubt: we will live on, and we will win," Ortega said in a public letter to Maduro on Monday. "The way of the nation, like the ways of the Lord, are mysterious paths that we have to learn to walk,” he added.

In Ecuador, led by Maduro’s other most vocal ally in South America, President Rafael Correa, the opposition was quick to connect the dots between the Venezuelan government’s defeat and what they hope will happen in their country.

Carlos Larreategui, a university rector and former opposition deputy, insisted: “Although it appears distant, Maduro’s defeat will have great psychological implications in Ecuador, both for the government and for citizens.”

He added that the Venezuelan result was a “moral defeat” for the Correa administration, despite Quito’s discrete attempts to distance itself from Caracas, and from Venezuela’s devastating economic crisis.

According to the International Monetary Fund, Venezuela’s 2015 inflation rate will hit 159 percent, while there are widespread shortages of everything from bread and toilet paper to cancer medicines.

More from GlobalPost: The sad story behind the world's cheapest Big Mac

Meanwhile, the country’s homicide rate is more than 10 times higher than that of the United States, according to UN figures, and opposition leaders have been jailed on what human rights groups have called trumped up charges.

One surprising spot of relief for Maduro came from Buenos Aires and Argentina’s center-right president-elect Mauricio Macri, who scored an upset victory in elections last month.

Macri had earlier responded to threats from Maduro to refuse to recognize an opposition victory by promising to have Venezuela booted out of the Mercosur trading bloc for violating the body’s democratic charter.

But Macri’s incoming foreign minister Susana Malcorra said Macri has changed his mind after observing that Caracas was respecting the Venezuelan election results.

Meanwhile, in Spain, the former socialist prime minister Felipe Gonzalez, who oversaw his country’s democratic transition from the Franco dictatorship and has visited Venezuela several times to defend jailed government opponents, described the election results as “spectacular” and a “civic cry of rebellion, for change.”

But perhaps the most poignant reaction from Spain came from the exiled father of Leopoldo Lopez, the Venezuelan opposition politician who is serving a 14-year prison term for supposedly inciting violent protests. Fellow opposition politicians have promised to free him once they control the National Assembly.

He added: “I think that my son went to sleep without knowing the magnitude of these results.”