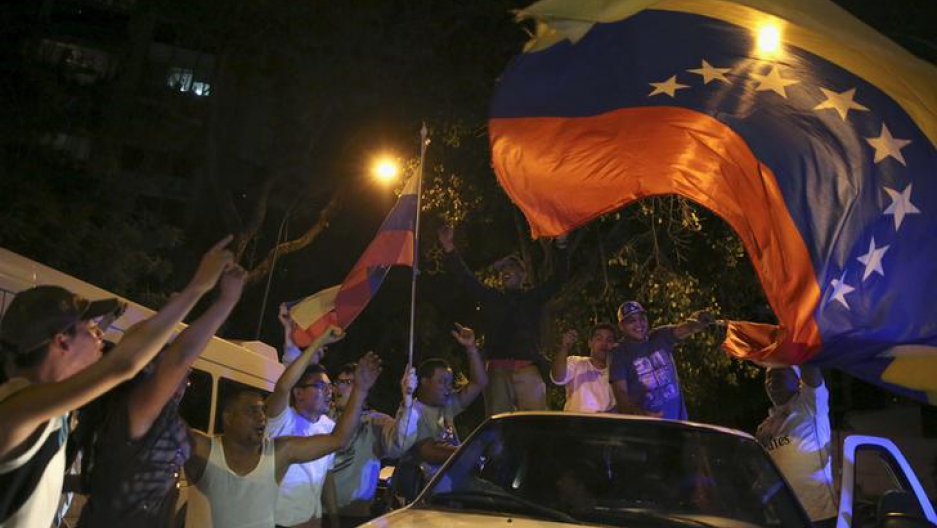 Supporters of the opposition Democratic Unity coalition wave a Venezuelan national flag from a car while they celebrate their victory on a street in Caracas December 7, 2015.

Venezuela's opposition Democratic Unity coalition won control of the National Assembly in what's being called landslide elections over the weekend. The win has stunned the ruling party led by President Nicolas Maduro.

The results show Venezuela's opposition winning control of the legislature from the ruling Socialists for the first time in 17 years, and that could provide a political platform to challenge President Nicolas Maduro’s grip on power. The opposition coalition won at least 99 seats in the 167-seat legislature. As one observer tweeted, “Joyous Venezuela opposition shatters Socialists' hegemony.”

“They got the joyous part right,” says AP reporter Hannah Drier in Caracas. “This is the first win for the opposition in 17 years. So that for students, young parents, people just starting their careers, the Socialist party has felt completely invincible for more than a decade. They used to call Hugo Chavez the invincible commander because he never lost an election. So it was a complete surprise.”

According to many observers, the vote was more against the Maduro government than in favor of any opposition platforms. ”It’s a ‘No’ to Maduro. The opposition hasn't proposed hardly any concrete policies. They campaigned almost exclusively on everything that's going wrong with the country, everything that's gone wrong with the government, and the economic crisis that has really re-shaped people’s lives in a way that even loyalty to Hugo Chavez can't outweigh.”

So it's at least a huge symbolic victory for the opposition. Socialists control not only the presidency and for the last 17 years the national assembly, but also the Supreme Court. So opposition members now hope they can start to wrest some of that control away. Drier says one Venezuelan political pundit last night said “this is no longer a contest between a train and a bicycle, now there are two trains, and the Socialist party and the opposition might be crazy enough now to crash into each other and smash up the whole country. Before [there] wasn't an option, the opposition had no power.”

All of which translates into a huge late-night celebration, says Drier.

“It was as if Venezuela had won the World Cup, with everyone in the streets. ... People were hugging each other and crying. Everyone was overjoyed.  And what was really surprising was that you saw this even in the slums, even in the places where support for Chavez has been the strongest, where people still have pictures of Chavez in their homes. They have those pictures but they're not voting for the party that he created.”

Drier added, “The opposition hasn't had a lot of wins like this.”

As for President Maduro’s response, he said in a televised address that he recognized the opposition's win — but celebrated that Venezuela's democracy had triumphed.