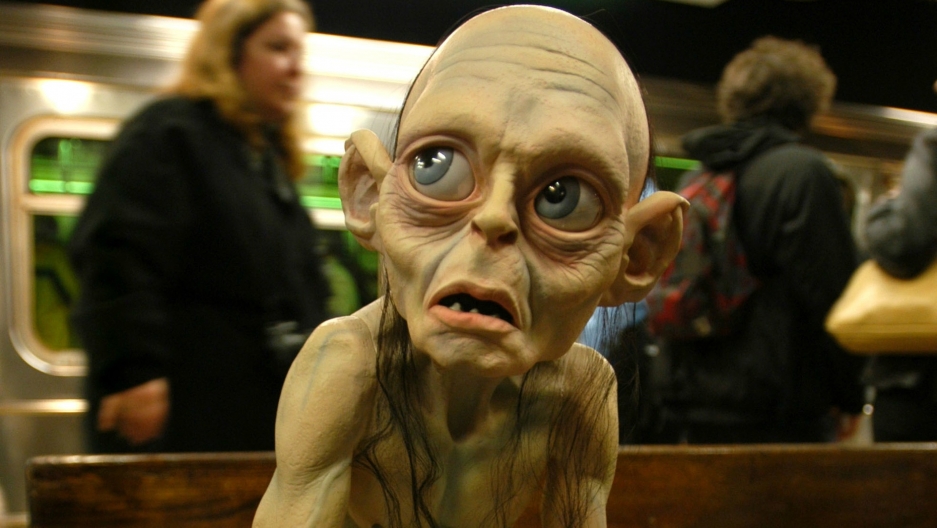 An interesting news story came out of Turkey this week, and by interesting I mean it-would-be-funny-if-it-weren't-true. Turkey's President Recep Tayyip Erdogan is suing an Aydn-baseddoctor,Bilgin ifti, for insulting the President by posting a side-by-side photo of Erdogan with The Lord of the Ringscharacter Gollum. In Turkey, insulting the president is a crime.

As any nerd worth their salt might surmise, being compared to Gollum isn't exactly flattering. But when you see the imagethat started the whole case, itisa bit less grim than you might expect:

A medical doctor's job is terminated by the state for sharing this picture #BilginCiftci #AKP @RT_Erdogan pic.twitter.com/C7E87t1KQ7

As eager as I am to delve into the deep character analysis this subject clearly warrants, just look at this image! There's something very sweet and playful about it:Tiny Fish-Eating Monster Matches Expressions with World Leader! (The bottom snacking diptychis truly a magical thing.) What's so bad about that?

Well, a lot, if you're the president of Turkey. Erdogan has a longhistory ofsuing people for insulting him, from unsurprising defendants like journaliststo more unusual examples like Miss Turkeyand a 14-year-old boy. Article 299 of the Turkish penal code states that any person who insults the president can face a prison sentence. Since Erdogan was elected in 2014, hundreds of people have been prosecuted under this statute and both citizens and larger organizations like Human Rights Watchcondemn the rule as a method of intimidating political dissenters.

The interesting thing about this case is that the court isn't quite sure that comparing anyone to Gollum counts as an insult. They have determined that the side-by-side photosdo count as a comparison, they're just not sure what kind of comparison it is. Even the chief justice wasn't surewhat to make of Gollum (depending on your source, he either "was familiar with" the movies,"hasn't seen them, or has only seen bits of them).

Things to Look Forward To

There will be months of deliberation before this is decided. The case has been adjourned until February, so you have a few months to reread LOTR (because you have obviously read them all already), re-watch the movies, and marvel at the wonder that is Peter Jackson. While you're brushing up on Gollum lore, there will be an officialdeliberation going on by"experts" --- yes, they're calling in the big guns. It appears that the exactexperts have yet to be named, but the court ordered that the investigation include a group of two "academics," two "behavioral scientists or psychologists," and "an expert on cinema and television productions." That leaves a very broad range of people who will hopefully produce a Ph.D.-level thesis on Gollum's character, motivations, and inner life. I dearly hope this is a publicly available document.

The way the case is being reported, the question of Gollum's essential moral fiber is the central sticking point: is he evil or not? Which is a pretty black-and-white way to evaluate a complex and interesting character.My expectation is that that distinction will be ultimately based on an intentions vs. actions argument. I think we can all agree that Gollum is pretty much always up to no goodand is constantly trying to thwartthe best laid plans of hobbits and wizards. But it's also made very clear in the books and films that Gollum's character has been mutilated by the power of The One Ring, to the point that in Jackson's adaptation his internal dialogue is fragmented into two characters during a torturedmonologue:

In fact, Peter Jackson himself responded to the court case, pointing out this dichotomy. Before Gollum was Gollum, he was a hobbit named Smeagol who was very likely as lovely as all the other hobbits we know, celebrating second breakfastand being sweet and carefree. His time with The One Ring warped him into the conniving Gollum. Jackson released a statementthat thefilm stills Dr.ifti used are actually of Smeagol,writing, "If the images below are in fact the ones forming the basis of this Turkish lawsuit, we can state categorically:None of them feature the character known as Gollum.All of them are images of the character called Smeagol." He goes on to write, "Smeagol is a joyful, sweet character. Smeagol does not lie, deceive, or attempt to manipulate others."

Since Smeagol and Gollum are really just the names for the different sides of one personality, I'm not sure that argument could really hold water in court. The thing that makes Gollum/Smeagola compelling character to begin with is thatunlike many of the creatures of Middle Earth, he lives in a shadow world between the malevolence of Mordor and the purity of the elves. He's much closer to human.

But back to my hypothesis: I do think the finalinterpretation of Gollum's moral turpitude will hinge on his intentions (the good-hearted Smeagol buried inside) or his actions (Gollum who even at the very endcan't let his precious get away). I have to admit, I'm not very optimistic for Dr.ifti's chances.