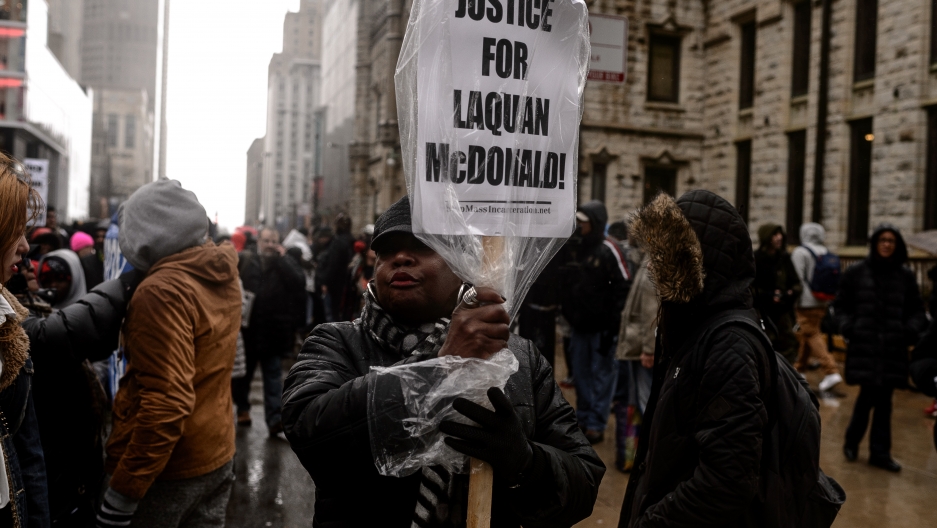 A woman marches with others down Chicago's Michigan Avenue to protest the killing of 17-year-old Laquan McDonald. The teen was shot 16 times by a Chicago police officer in 2014. That officer, Jason Van Dyke, was charged with first-degree murder last month.

I like to believe there is at least one good cop in Chicago. One cop who broke the blue wall of silence to lead independent journalist Brandon Smith to uncover the story of Laquan MacDonald’s death.

That’s the 17-year-old teen who Chicago police officer Jason Van Dyke shot 16 times, two of the first three shots in the back, 13 when he was already on the ground wounded.

There were five other cops on the scene — none of them shot at Laquan, but none of them disputed the official police report. That report described Laquan as a threat, said he was carrying a small knife in his hand (he was), that he may have been on drugs (not confirmed), and he was walking toward the officers at the time of the shooting. He was not. That was the official story, but somebody in the department knew — as the dashcam video later revealed — that it was a lie. And he or she apparently could not live with it, so they steered Smith to the damning evidence.

Many law enforcement analysts have broken ranks publicly to criticize the Laquan shooting. For example, Boston Police Commissioner William Evans recently said “obviously it was excessive force.” But Evans feels confident that Boston has systems in place to red flag potential problem officers, and to respond to the public in the moment.

And he added that the ripple effect of this shooting means “we all get painted with the same brush.”  It’s hard not to.

Laquan was shot on October 20, 2014, three months after Michael Brown was gunned down in Ferguson.

To his credit, Evans has been an advocate for transparency, particularly in controversial cases. But the trust between law enforcement and communities of color is nearly irrevocably shredded because of shootings like Chicago’s. And because of the tacit cover up of police officers in Chicago and elsewhere who keep quiet, even when they witness wrongdoing.

By all accounts the blue brotherhood shuns and intimidates whistleblowers. Maybe that’s why reporter Brandon Smith’s secret source stayed undercover. Whatever the reason, it’s chilling to think that without this timid tip off by a police insider, the true story of how Laquan died might not ever be known.

Chicago Mayor Rahm Emanuel, under fire for his part in the botched 13-month investigation, has now appointed an outside review panel. Community activists have said this mayor-appointed panel is akin to asking “the fox to guard the chicken coop.”

What the activists want is a truly independent review panel, like the Citizen Review Board that Boston Mayor Marty Walsh announced back in April. I commended Walsh then, but I’ve been disappointed that there have yet to be any concrete moves to make the Board a reality.

I hope that a Laquan MacDonald shooting never happens in Boston. But if it does, I want to know that the truth will be brought to light through a strong investigation — and not a whispered conversation in the dark.