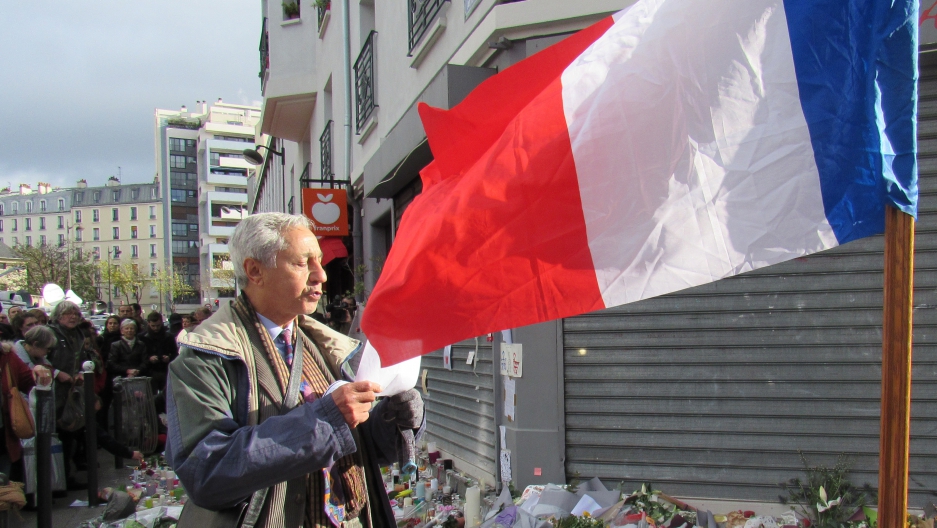 The French flag first made an appearance at the site of some of the Paris attacks. Now, people are displaying it from their windows. And that's a rare thing for the French.

Since November 13, I have seen more French flags on display that I can ever remember.

First, the Blue, White and Red flags appeared at the site of the attacks in Paris. But they soon began to pop up here and there. When I called a flag supplier, Drapeau-France, all I could get was a recorded message: “Due to an overwhelming number of flag orders, our switchboard is no longer taking calls. Please place your order online.”

“The three last times when the French flag was displayed on a large scale here were in 1944, when Paris was liberated; at the death of General De Gaulle in 1970; and when France beat Brazil in the 1998 Soccer World Cup,” he says.

Outside of sporting events and Bastille Day celebrations, you would have a hard time finding a French flag for sale.

Marie-Claude Augé, who runs a small trophy shop in the town of Auxerre, in Burgundy, says she sells flags to City Hall and other institutions for national holidays. But in 15 years, she says, she’s sold maybe two or three flags to private citizens. Now, though, the flag requests keep coming in.

Augé says it started when President François Hollande called on the French to display the flag in memory of the victims of the Paris terror attacks.

“I said to myself, this is unreal — he thinks we’re Americans,” she says. “We know Americans are very attached to their flag, and I have seen that in other countries as well. But the French? No. Hollande must have thought, ‘People will just grab their flag out of the closet.’ But the French just don’t own flags!”

My own brother, Frederic, told me he decided to order a flag online — his first ever — in a show of solidarity. He says it bothers him that French public institutions in general don’t even try to show any sign of patriotism.

“Across the street from my house, there are two public high schools,” he says, “and neither displays a flag. These are schools with a good social and cultural mix, and there’s no flag.”

In fact, the French aren’t just blasé about their flag. Many look down on it as borderline tacky — lumped together with old clichés like Bastille Day accordions, or the béret.

And some see the flag in an even more negative light.

Bernard Richard, the historian, explains that the flag, which was created after the French Revolution, became a symbol of the authoritarian Vichy government during World War II. Later, it was embraced by pro-colonialists and anti-democratic movements.

Among those movements: Today's far-right party, the National Front, which is anti-Europe, anti-immigration and anti-Muslim. And it’s leading in the first round of the regional elections.

I do know some people in France who owned a flag before the attacks; for instance, my friend, Emmanuel Sciot.

“I’m proud of my flag and I’m proud of my country,” he says. He defines himself as a patriot, not a nationalist. “As a patriot you belong to a community in spirit, not because of where you were born. So whatever your origins or religion may be, you are connected through country. The nation is something else.”

Sciot says shortly after the attacks, when he put up his flag in his yard, a group of high-schoolers applauded as they walked by it on the street, and an elderly couple rang his doorbell to thank him for having the guts to display it.

Madame Augé, at the trophy store, says she’s still getting a good number of flag orders now, though it has slowed down. As I walked out of her shop, I noticed the French flag in the window didn’t look quite right. She explained she felt the need to display a French flag to honor the victims but she had run out. So she got creative.

“I had to tinker a bit to make this flag,” she says. “I used pieces of other nations’ flags that I had in stock to come up with a blue, white and red flag.”

When I asked where the suspicious royal-blue stripe came from — it’s lighter than the official French flag’s blue — she checked her catalog to jog her memory.

“It’s from Luxembourg,” she says. “I took the Luxembourg flag, cut out its horizontal stripes and rearranged them vertically so I would still have something that was Blue, White and Red,” she says, laughing. 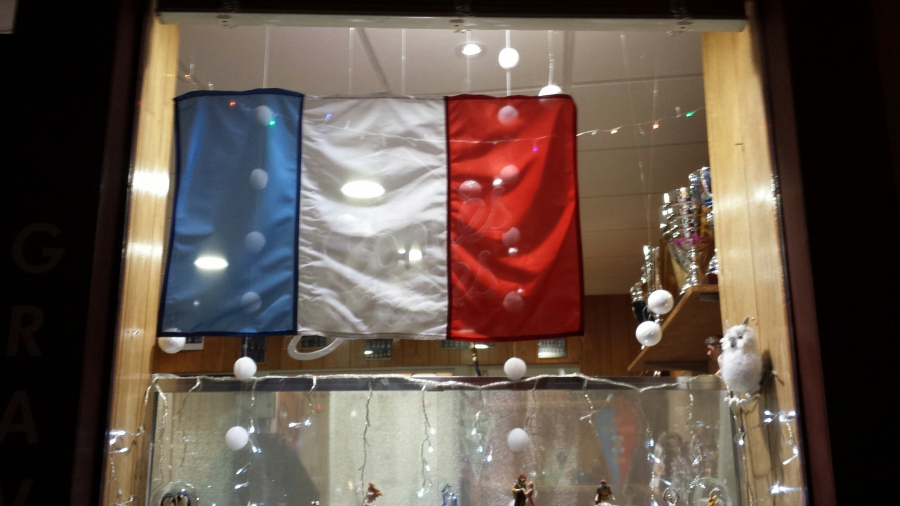 When Marie-Claude Augé ran out of French flags at her trophy shop, she cobbled together one for her shop window. The blue stripe here is from Luxembourg's flag.

In a way, Augé’s scavenging of other flags to create a patchwork French flag could be seen as a grand patriotic gesture. It makes me wonder whether we’re seeing the advent of a brand new love for the flag here.

Bernard Richard, the historian, says it is too early to say whether the flag is just a temporary coping mechanism for a grieving France. But it may be getting a new image that no longer belongs to one party or another “because the French have embraced the flag spontaneously,” he says.

In that role, it serves as a natural link connecting French citizens from all walks of life.