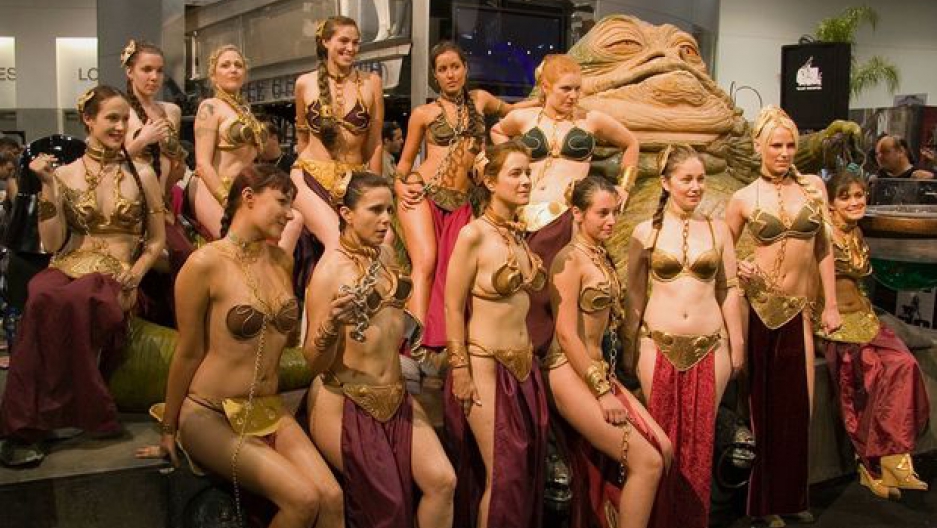 A crowd of Princess Leia fans wearing the iconic gold bikini at the San Diego Comic-Con in 2007.

The costume wasn’t on screen for very long — but it has become legendary. In “Return of the Jedi,” Princess Leia is captured trying to rescue Han Solo from the lascivious slug monster Jabba the Hutt. In captivity, she’s forced to wear a gold metal bikini while chained to Jabba.

Three decades later, women are still dressing up as “Slave Leia” at conventions (yes “Slave Leia” is the official trademarked name of the gold bikini). But many Princess Leia fans have complained about Slave Leia becoming the dominant image of the main female character in the Star Wars trilogy — in the form of everything from action figures, to Bobbleheads, to aprons, to thumb drives.

"The fact is, people are always going to want to see their favorite characters in a sexy pose, especially if they actually are sexy. So we can't weed that out of our brains — that's just kind of part of being human," says Ars Technica editor Annalee Newitz. "All we need to do is just make sure that we have both men and women — cheesecake and beefcake — and then we're fine."

Washington Post columnist Alyssa Rosenberg, however, says she sees "Slave Leia" as something of a feminist icon.

"Let's be clear, she strangles the guy who is keeping her as a sex slave — with her own chains," Rosenberg says. "It also puts you on the same side as Jabba the Hutt in objectifying her, right? It's a sexual image that deliberately exploits any attraction you feel to it by putting you on not just the side of evil, but with the most difficult grotesque villain in the movies. ... I think that's a pretty powerful feminist cinematic moment, whether George Lucas intended it that way or not."

But HitFix writer Donna Dickens sees a much darker moment in the scenes where Leia is forced to wear the bikini.

"For princess Leia to be in a slave bikini in Jabba the Hutt's palace, completely cowed and silent and submissive — what are the implications of what had to have happened off screen for her to break like that?" says Dickens.

Dickens may be repulsed by what she thinks happened to Leia off screen, but she cheers the actions Leia takes on screen while wearing the bikini. "I may refer to it as the Hutt-slayer Leia costume, because that's what she does in it. She slays Hutt," Dickens says.

And Carrie Fisher, who had to actually wear the gold bikini in the original film? She told Newsweek the costume is what supermodels will eventually wear in the seventh ring of hell. And in Interview Magazine she talked with Daisy Ridley who's in the new Star Wars movies and told her "You should fight for your outfit. Don't be a slave like I was."

Then, at a ceremony honoring George Lucas, Fisher said, "But like any abused child wearing a metal bikini chained to a giant slug about to die, I keep coming back for more."