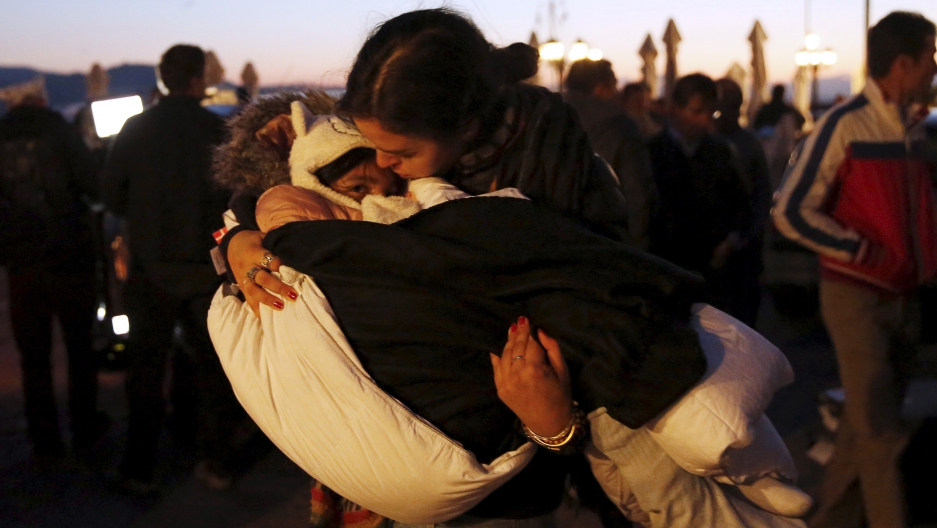 A volunteer carries a rescued migrant child after a boat carrying more than 200 refugees and migrants sunk while crossing part of the Aegean sea from Turkey, on the Greek island of Lesbos, October 28, 2015.
Credit: Giorgos Moutafis
Share

She was taking the dangerous trip from Turkey to Greece on a boat with her husband, three sons — aged 1, 5 and 15 — and her 10-year-old daughter. Um Suleiman doesn’t know how to swim, and so was nervous before setting off. There were more than 280 people on a boat meant for no more than 150.

“An Iranian man was told to drive. He didn’t know how. The waves were big and the wood of the boat was old.”

Then the worst happened. The boat sank. She says they were in the water for over an hour before they were rescued.

In the chaos she lost sight of her husband and her two older sons.

“I didn’t see them in the sea. Just my son in my arms and my daughter behind me,” she says. “My youngest son was almost unconscious in my arms.”

When she was finally taken to land with her baby and her daughter, she couldn't find the rest of her family. Later, she saw the lifeless bodies of her husband and her 5-year-old in photographs taken by the Greek coast guard.

Eight people died in the sinking, which is thought to be the largest maritime disaster off the coast of Greece since the latest influx of refugees began. A total of 16 were killed off the coast of Lesbos that day.

Her oldest son, 15-year-old Suleiman, is still missing along with 33 others. His mother has not given up hope that he will come back. 15-year-old Suleiman, who is missing after being separated from his family when a boat capsized off the coast of Lesbos, Greece. If you have information related to his whereabouts, please contact the author at lauracdean@gmail.com.

“I don’t know where he is. We are looking for him and hope he’ll come back. Maybe he’s in another camp,” she says.

It has been more than three weeks since their boat sank on the journey from Turkey to Lesbos, Greece, where many refugees take their first steps into the European Union. More than 500,000 have come to Europe through the Greek islands so far this year.

In a converted summer camp cabin on the island of Lesbos, Um Suleiman clings to Mohamed, who is 15 months old now. She spends most days here in a refugee camp for vulnerable cases. Daughter Sabeh mingles and plays with the other children, many of whom have also lost loved ones in the crossing.

Meanwhile her widowed mother waits every day for news of Suleiman. She faces a painful choice.

“If he comes we will continue. If not, we’ll go back to Iraq. I can’t stay [in Europe] alone. Others back in Iraq will judge my family and will say it’s shameful.”

But if she goes back to Basra, she fears a future even more bleak. “If I go back I’m afraid my family will take away my children and give them to my brother and his wife to raise and will make me marry someone else.”

And there’s another reason she fears going back to Iraq. “If I go back I’ll be surrounded by memories, of taking my sons to school, of being with them. But I’m also afraid to stay alone here.”

She left to give her children a better life, particularly her teenage son.

“It’s hard in Iraq, with the explosions and now Daesh," she says, using the Arabic acronym for the Islamic State. "I left because I felt a responsibility to my son to give him a better future. In Iraq people graduate from school and then they don’t do anything, there are no jobs, maybe they sell things in the street, there’s so much fear. I wanted a future for my children, where they could study and find good jobs, professions.”

Now a large part of that reason no longer exists.

“He wanted to be a pilot,” she says of her oldest son. “He loved school and was very loved, he was smart and studied a lot. And he loved football. Even when he played playstation he played football video games.”

The only way she can stay, she says, is if her brother makes the journey to Europe too. “He said, ‘Just say the word and I’ll come.’ But I don’t want him to come by sea.”

He’s 27 and has two girls who would be making the journey with him. She says she wishes there were some way he could come legally, by plane or through the United Nations.