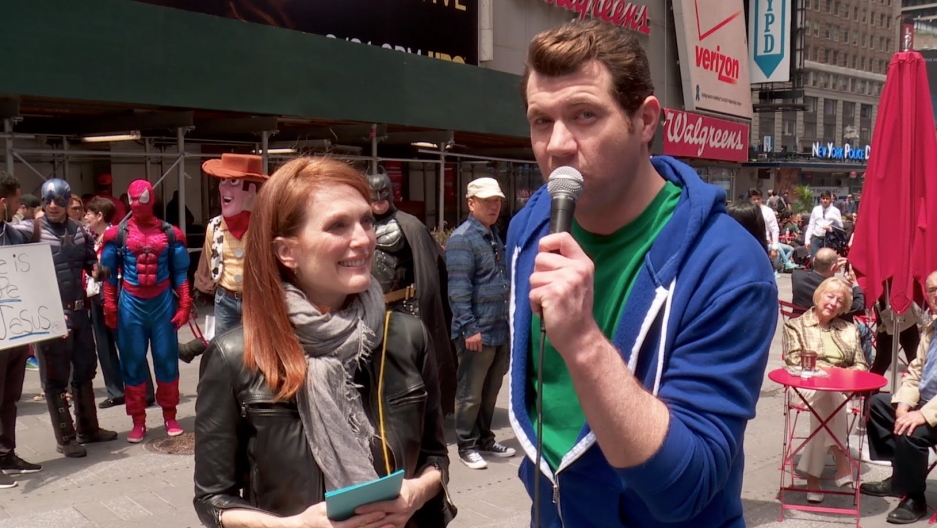 This week in "Thanks, Internet" --- Julianne Moore cries on Billy Eichner's cue, a car ride with Public Enemy, and the best little drummer girl everwin the internet this week.

1.It's Okay to Judge This New Yorker by Its Cover

New Yorker covers tend to be awesome. But this animated covertakes it to a whole new level. Teaming up with Ira Glass and "This American Life," Chris Ware and John Kuramoto animate a story about a mother, her 13-year-old daughter, and makeup. And if you have been a mother or a daughter, or know anything about mothers and daughters, you understand how very delicate this seemingly frivolous subject can be.

Oh, and then they got Nico Muhly to score it. Because it wasn't already amazing enough, they had to take it to 11.

Meet my new hero, Eduarda Henklein. This 5-year-old girl WHALES on the drums and it's awesome. And, because this one video will not be enough for you, she does AC/DC, Pearl Jam, Led Zeppelin, and so much more.

3.Take a Hard Look at a Natural Redhead

The best show in Times Square recently wasn't on a Broadway stage, it was out in the streets as Billy Eichner paraded Julianne Moore and her Academy Award-winning acting skills around for tourists' money --- and living out every New Yorker's dream: yelling obscenities at those fake costumed characters.

4. Four RapLegendsand One Brit Pile into a Ford Focus...

One lucky guy now knows what it's like to rock out to Queen's "Bohemian Rhapsody" in his car with Public Enemy. Wayne's World style. Someone's dying a happy man.