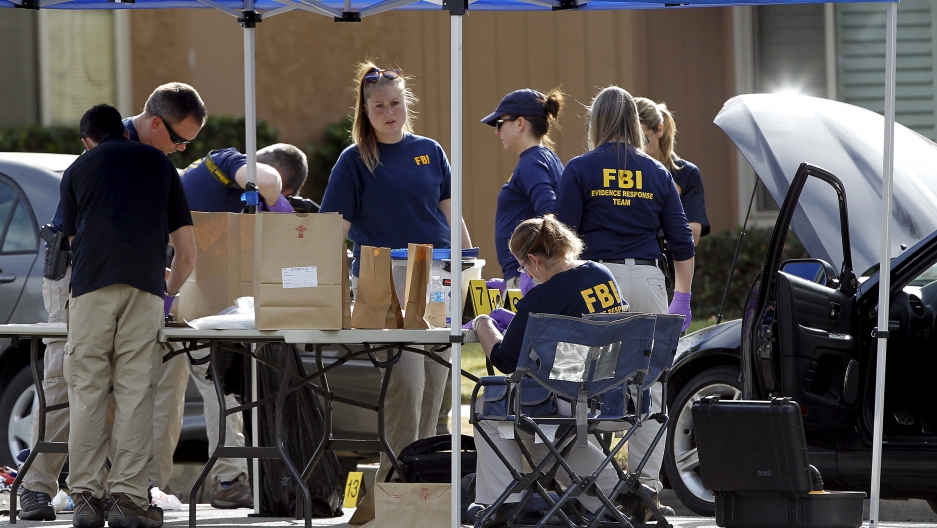 FBI agents gather evidence in front of the Redlands residence belonging to the suspected shooters in the Wednesday massacre in San Bernardino, California December 3, 2015.

The FBI is now investigating the attack in San Bernardino, California, as an "act of terrorism" — in the wake of new information that has led officials to focus on connections between suspects Syed Rizwan Farook and Tashfeen Malik and ISIS.

David Bowdich, the assistant director in charge of the FBI's Los Angeles field office, wouldn't speculate on whether the two were directed by, or even inspired by ISIS in the deadly attack that killed 14. But in a statement from the ISIS news agency, the terrorist group praised them as "supporters" — rather than fighters. Seemingly a key distinction.

Bowdich said he was aware of a Facebook post said to be made by Malik in the middle of the attack, pledging loyalty to ISIS leader Abu Bakr al-Baghdadi. He wouldn't confirm its authenticity, but said the FBI is looking into "telephonic connections" between one of the two suspectss and others connected to terrorism.

Terrorism experts say it's common practice to radicalize women and mothers to make sure their partners remain loyal.

"We've seen women that are radical, we've also seen women who are more radical than their husbands," says Mia Bloom, a professor of communication at Georgia State University and author of "Dying to Kill."

Malik, 27, and Farook, 28, both killed in a shootout with police after the attack, had a six-month old daughter, who they left with Farook's mother, before the shootings. Bloom says it would not be a surprise if Malik in fact recruited her husband into radicalism, as some have suggested.

"We've seen it before," she says. "We saw it with the very first female suicide bomber for al-Qaeda in Iraq. She encouraged her husband to go to Iraq and they took a Kia, loaded it with explosives and killed several US servicemen in Iraq."

"There was always this assumption that having a wife, a child, a mortgage — you didn't have any time for terrorism." But she says that Jihadi and others radical groups have been very clever.

"What they do is match up men to women who are equally committed to the cause, so instead of having the wife and child as a mechanism of leaving the group, it's the anchor that makes sure they don't leave."

The attack has reverberated in Pakistan as well. "Just knowing that she was Pakistani, it instills fear in millions of Pakistanis," says Bina Shah, a writer based in Karachi Pakistan, "Not just the ones living at home but the ones who live in the United States and other parts of the world."

On her blog, Shah wrote a letter to Malik. At one point she writes: "If you committed your act of violence for any cause, you failed to achieve your goal, but you achieved a different one: you dragged your Pakistani sisters into the mud."

Shah says she's already seeing a backlash against Muslim women wearing the hijab, the scarf over their heads, the most visible way to identify them as Muslim. "Muslim women, Pakistani women, are generally not known for perpetrating violence. They are actually more likely to be the victims of violence. This is just a very very bad thing for all of us."

Asked if she thought Malik thought about a possible backlash before she took part in the mass killing, Shah's voice rises. "That's exactly the problem. That was the gist of my letter and impetus of my anger. This was an extremely selfish and horrible thing to do." Shah says the violence and taking of innocent lives was inexcusable.

Shah believes Malik's actions are just going to make things so much more difficult for the millions of Pakistanis who want to make their home in the United States and live peacefully as good citizens. "Up until this attack happened, Tashfeen Malik and her husband were those two innocents just wanting to get on with their lives. Her husband had a job. They had a baby. It's baffling."

"There's just condemnation. There's no trying to justify this or excuse it or understand it in any way," she says.

Despite patterns of radicalization that may resonate with the suspected shooters in the San Bernardino case, Bloom warns that of the 355 mass shootings in the US this year, only two have been the work of Muslims. She says Americans need to be careful not help ISIS' cause.

"The concern is that by overly focusing on this event versus other events we are playing into ISIS' hands," she says. "This idea of refusing to let in refugees, that's exactly what ISIS wants. It's embarrassing for them that the refugees are trying to leave. They want us to overreact."