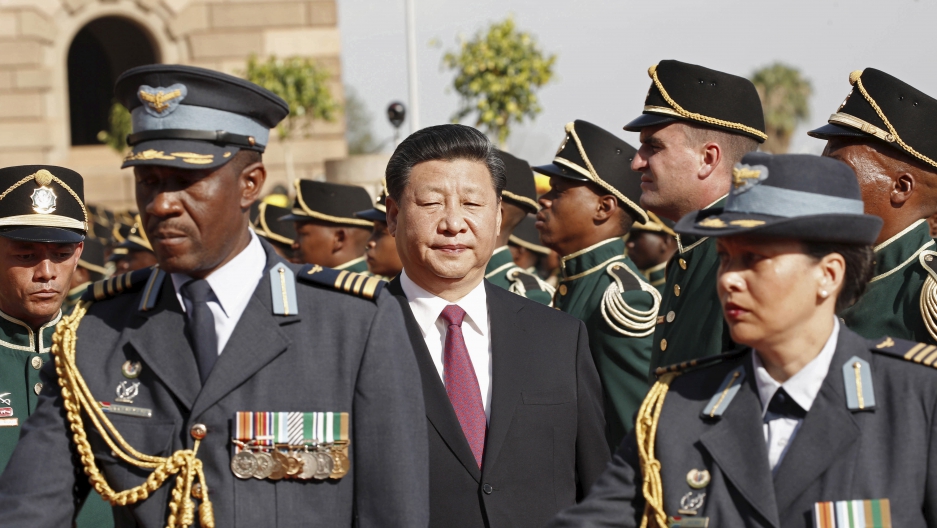 Chinese President Xi Jinping inspects the guard of honor at the Union Buildings in Pretoria before his meeting with South African President Jacob Zuma, December 2, 2015.

While several world leaders meet in Paris to discuss the fight against climate change, a very different kind of meeting is happening to the south. This week, African countries are receiving a visit from their largest trading partner: China.

Chinese President Xi Jinping is currently in South Africa to participate in the Sixth Forum on China-Africa Cooperation, which is being held Dec. 4 and 5. He took some time to meet with Zimbabwean President Robert Mugabe earlier this week.

“Mr. President, I am glad that Zimbabwe and China speak the same language on many issues," Mugabe said, addressing Xi. "We share the same conviction that only fair, just, and non-prescriptive world order, based on the principles of the charter of the United Nations, can deliver the development we all need."

In his use of the term "non-prescriptive world order," Mugabe was perhaps making a dig at the policies of the United States, which only lends developmental aid to "proper democracies." While the US has long refused to deal with governments like Mugabe's, China and Zimbabwe just signed 12 agreements worth more than $4 billion.

Has China gotten something right in its dealings with African nations?

“[China] has two things — huge demand, and African nations need that demand,” says Daron Acemoglu, a professor of economics at MIT. “And it has a much more robust stomach when it comes to corruption, human rights abuses, and unsavory dictators.”

Acemoglu, author of "Why Nations Fail,” says that China, unlike the United States, does not view its influence as an agent of political change.

“If you look at recent Chinese history, there isn’t anything that the Chinese leadership is more adverse to than political change,” he says. “I don’t think that they’re ever going to be asking for political change from another country, especially since they are not willing to think about it at home. They have made a very vocal point in the past that they do not want to interfere in other countries’ businesses.”

Though President Xi will likely not call for political and social reform during his tour of Africa, he’s likely to push for change on other issues that can potentially benefit China.

Acemoglu says it’s too soon to tell if China is cozying up to Africa to quickly take advantage of its resources and then leave, as colonial powers have done in the past.

“I wish I could give a clear answer to that,” he says. “I think it’s a little bit more nuanced. All else equal, over the last 20 years, I think Chinese relations with African nations have been a force towards greater GDP. Why? Because African nations export natural resources and export agriculture, and there has been a huge demand coming from China.”

In addition to trade, Acemoglu says the Chinese have built roads and invested in other infrastructure projects in Africa.

What many African nations really need, says Acemoglu, is better governance and better institutions, and it’s unlikely China will help them in that quest.

“The Chinese not only don’t help with the building of better institutions, but often they actually ossify the existing institutional status quo,” he says. “You can see that with Zimbabwe; you can see that in the last 15 years with Sudan.”

After a series of brutal human rights abuses, Sudan was cut off from virtually all Western nations. China kept trade avenues between the two nations open, and even started supplying arms to the regime of Sudan’s current president, Omar Al Bashir. Bashir is currently wanted for war crimes by the International Criminal Court.

“It’s very clear that the Chinese are just not interested in being the agent of institutional change,” says Acemoglu. “But they do value strong governments that they can rely on and do business with, and perhaps pay bribes to.”