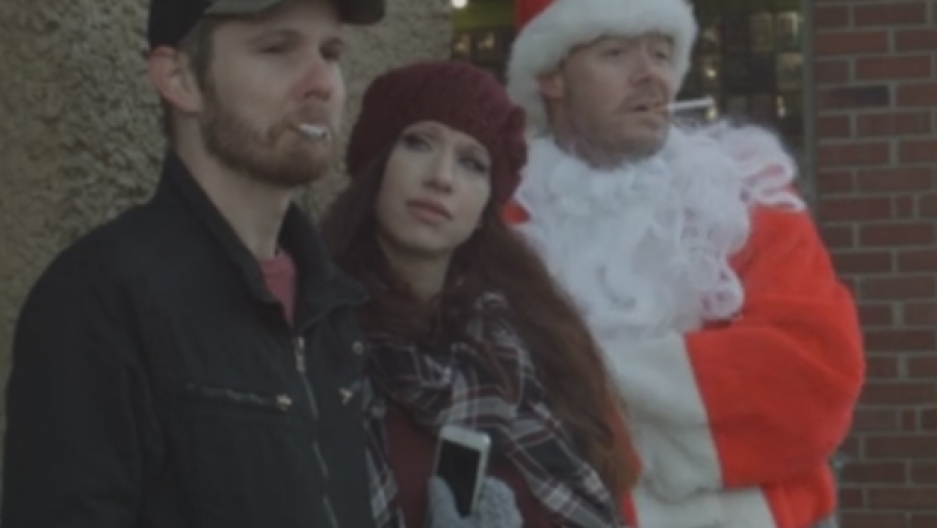 For the past month, Studio 360 host Kurt Andersen and comedian Jenny Slate have been asking our listeners to spread a bit of holiday cheer and send ina 30-second short film about the holidays --- anyholidayyouchoose. We're calling this challenge It's a Wonderful Short, and Slate will be back on the show in December to announce a winner.

You can see all the entries we've received here, but we're including a few below for giggles and inspiration. You've one more weekendto submit your own short --- the deadline is Monday, December 7th, at midnight.Enter here.

I was surprised to seewereceived two silent-movie submissions. Both these entries used a cheeky nod to the silent erato help them stay under the 30-second mark. This first entry, from Monica in Los Angeles, could easily run before an old-timey newsreel. I think the part I like best is where the woman laughs off the man's advances --- there's something a little dotty and manic about it that feels very much in keeping with old movies.

Sarah in New York also made a silent film, imagining the plight of single mothers everywhere:

Quite a few short films decided to take on the dark side of the holidays, from binge drinking to mall Santas. The conceit of this entry from Kylie in Los Angeles is probably familiar toany office worker; she writes it's "based on true events."

An from Davida (also from L.A.) is also based on a true story. She writes, "It's a family tradition of my friend to sit around a fire every holiday season and read holiday cards they have been sent. They then name something they hate about the sender and throw it in the fire! I decided to turn it into a short." Note to self: no need to buy any cards this year.

Ahigh proportion of entries hada comedic take on the holidays. I like how this entry from Savannah in Lawrence, Kansas, feels a bit like a good one-liner: set up and punchline, one right after the other.