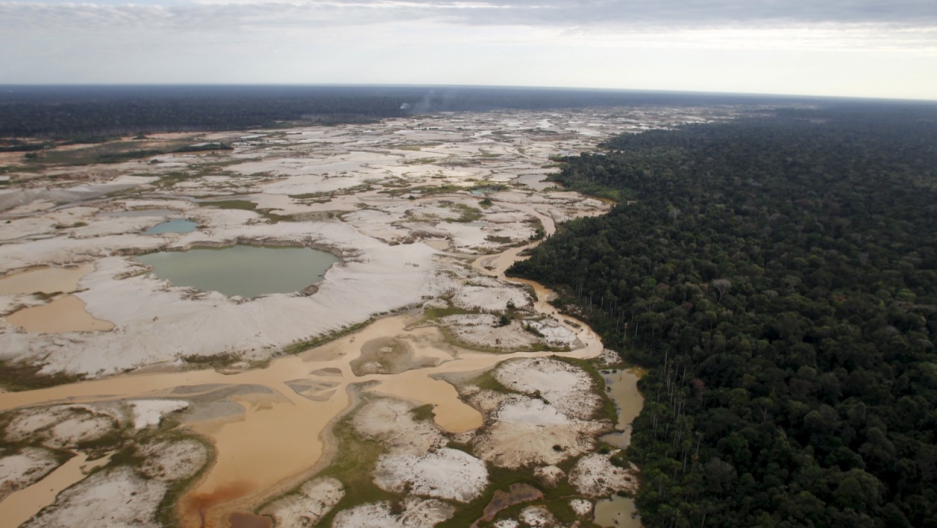 LIMA, Peru — As negotiators butt heads in Paris over the fine print of a new United Nations climate treaty, one issue they will need to address urgently is the fate of the Amazon.

The world’s largest tropical rainforest is estimated to store between 90 billion and 140 billion metric tons of carbon dioxide — well over a decade’s worth of the entire planet’s greenhouse gas emissions.

There’s a growing awareness about the harm from destroying those trees.

But the battle to save the Amazon has hit a series of recent setbacks.

Deforestation in Brazil, home to about two-thirds of the Amazon, has jumped 16 percent. A total of 2,251 square miles of forest, an area almost twice the size of Rhode Island, was cleared during the 12 months to August. The rise is thought to be related to new, more relaxed laws for farming in the Amazon. Large parts of the Amazon in Brazil, like this area photographed in October, are cleared for soybean farms.

Even as the Paris summit gets under way, activists are reporting a new major blaze in the Brazilian jungle — threatening indigenous communities that have lived in harmony with the rainforest since time immemorial, while also releasing huge amounts of carbon into the atmosphere.

Peru, meanwhile, has the second-largest chunk of the Amazon, a stretch of jungle twice the size of California, and is also failing to protect it. Illegal gold miners are starting to encroach on the Tambopata Reserve, one of the country’s best-known natural protected areas.

Thousands of miners have already razed large tracts of Peruvian jungle, and poisoned it with the mercury they use as part of the extraction process.

A gold mining boom kicked off with the global recession in 2009, when investors sought to put their money into the ultimate financial safe haven, jacking up global prices and demand.

More from GlobalPost: The scramble for El Dorado

And in Bolivia, President Evo Morales angered environmentalists this year by giving the green light to oil and gas drilling in the country’s national parks, including part of the Amazon.

That's despite Morales making the most of his status as Bolivia’s first indigenous president and posturing as a defender of the “Pachamama,” or “Earth Mother.”

There are already fears that logging in the Amazon, to make way for agriculture and ranching, is changing regional rainfall patterns. And that in turn is combining with climate change to raise risks of droughts and forest die-off, potentially turning the jungle into savanna.

More from GlobalPost: Calamity Calling: What if we lost the Amazon?

Back in Paris, halting deforestation is on the table. Most of the world’s jungles are in poor countries, so the question is how rich countries can financially support them to do the right thing, including enforcing laws against logging, poaching and mining.

The future of the Amazon may depend on it.