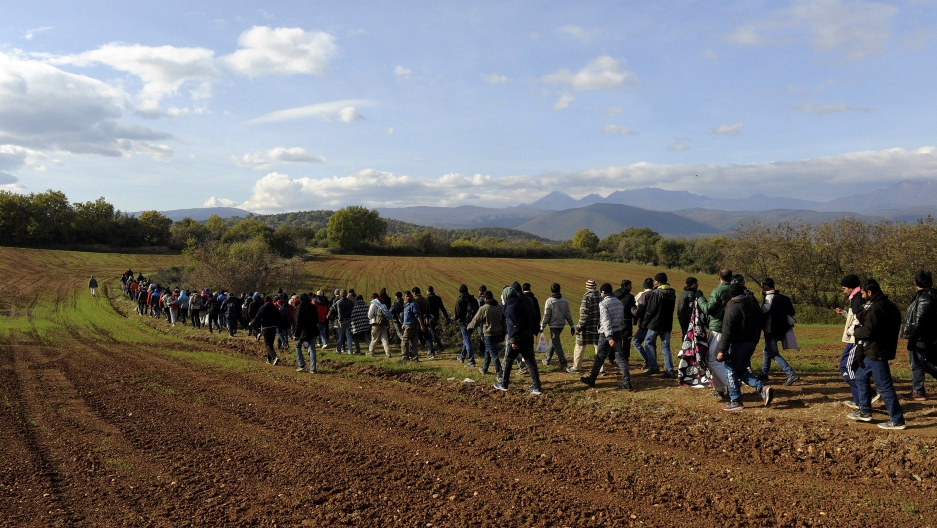 Stranded migrants walk next to the Greek-Macedonian border, in search of a crossing, near the village of Idomeni, Greece December 2, 2015.

In the days after last month's terror attacks in Paris, Texas Governor Greg Abbott was just one of dozens of governors who moved to halt refugee resettlements within his state's borders.

"The most important responsibility I have as governor is to keep the people of Texas safe," Abbott told reporters in November. "When we see the dangers caused by Syrian refugees in Paris, it is imperative that Texas do everything we can to make sure we don't have a Syrian refugee sneak into the state of Texas who can pose a similar terroristic danger."

This week, Abbott's administration went one step farther. Chris Traylor of Texas's Health and Human Services Commission sent a stern letter to the Dallas branch of the International Rescue Committee (IRC). In it, the commissioner threatened to sue the IRC if it continues to assist Syrian refugees seeking to locate in Texas.

"We have been unable to achieve cooperation with your agency," Traylor wrote in the letter, which was released to the Houston Chronicle. "Failure by your organization to cooperate with the State of Texas as required by federal law may result in the termination of your contract with the state and other legal action."

Wednesday night, Texas filed suit against the organization and other federal entities.

“We have been working diligently with the International Rescue Committee to find a solution that ensures the safety and security for all Texans, but we have reached an impasse and will now let the courts decide,” said Bryan Black, a spokesman for the commission.

Donna Duvin, executive director of the Dallas branch of the International Rescue Committee, finds the threats more than a little troubling.

“We receive financial support from the federal government in support of refugee resettlement; some of those dollars come through each state,” says Duvin. “Every year, based on the number of refugees we expect to have, we work out a contract with the state so that they work out a payment plan and we’re able to access those dollars.”

The state of Texas has the highest refugee resettlement rate in the country — between 2012 and 2014, Texas took in more than 20,000 refugees from around the globe, according to the US Office of Refugee Resettlement. But, like other refugee agencies, the IRC doesn’t answer to the state of Texas — it works under the direction of the US State Department, though they do consult with state governments.

“Refuges are residents admitted under US federal immigration law, so they’re coming in as recognized individuals and are able to access services that they’re eligible for,” says Duvin. “Once they get here, really, truly, they’re sanctioned to be able to make a home wherever they’d like to be. That’s not within the purview of any agency's direction.”

Despite the showmanship, Texas technically has no authority to bar legally recognized refugees with federally-issued visas from coming into Texas.

“We have certainly reached out to the governor and to the state Health and Human Services Commission to see if we can address any concerns that they have and to answer any questions that they have about the vetting process,” Duvin says. “That’s really what secures the entrance for refugees arriving here in the US. With that process being as extensive as it is, if there’s anything in a person’s past that would lead to any conclusions other than a complete security clearance, they’re actually dropped from the program.”

Duvin’s group has already resettled two refugee families from Syria in Dallas in the last year. Though the IRC is helping them to make a new home, these Syrian families were somewhat surprised by the anti-refugee rhetoric being thrown around in Texas and other states.

“We keep very close contact with them, especially to see how they’re faring,” says Duvin. “It’s remarkable — when we talk to them they really don’t see themselves in the way that the press or others have talked about. ... They know the backgrounds that they come from. They know the fight that they’ve had to get here, and they know how desperately they wanted to become US citizens so that they could leave the violence behind. They really see themselves as blending in, and don’t see themselves as a part of the discussion as much as you would think. They’re just really happy to be here.”