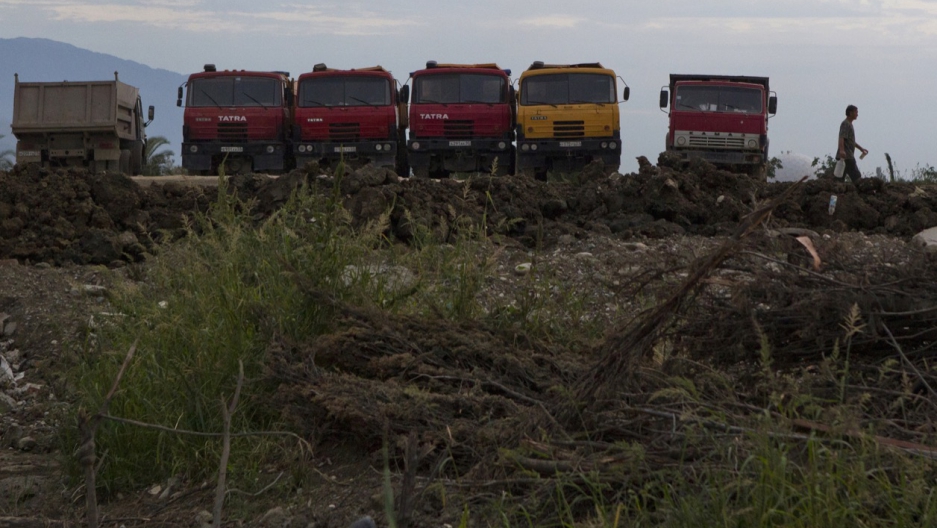 Forget the iPad-toting hipsters who have typically taken to the streets against the Kremlin — this time, Russia’s rugged truck drivers are rising up to challenge Putin's rules.

For weeks, long-haul truckers around the country have been protesting against an unpopular new highway toll system that targets trucks weighing more than 12 tons.

Officials say the new tolls are meant to fund road repairs, but the aggrieved claim it’s an unnecessary expense that's probably just getting pocketed or kicked back, commonplace practices in notoriously corrupt Russia.

After all, the company collecting the cash is partly owned by the son of a close confidant of President Vladimir Putin.

“There was no money for repairing roads, and there won’t be, because [officials’] pockets are full of holes,” one demonstrator told Radio Free Europe/Radio Liberty.

There’s no coordinated center for the movement, but there’s plenty of popular anger. Protest leaders promised to send columns of truckers into Moscow on Thursday evening after Putin failed to address their concerns in his annual state of the union address earlier in the day.

One of the last times people in Russia protested in droves was in the months leading up to Putin’s re-election in 2012. Back then, a wave of Moscow-based protests was fueled by mostly educated, middle-class urbanites who demanded political change. That eventually fizzled out after the Kremlin put the squeeze on activists.

The authorities have since relied on Putin’s conservative, working-class base — from state employees to, say, truck drivers — in order to stay in power.

But now the government is angering some elements of that often silent majority.

“The government provoked their ire by violating the social contract that underpins the Putin regime, by which the public is expected to stay out of politics in exchange for the government handing out social benefits — or at the very least, not picking the pockets of its citizens,” wrote Andrey Pertsev, a journalist for the Kommersant daily newspaper.

Even though the truckers aren’t voicing political demands, their protests are making officials nervous.

When they tried to collectively head to Moscow earlier this week, police reportedly stopped them outside the capital. A day later, parliament proposed a bill that would punish motor rallies with a $4,500 fine.

Still, Pertsev says the Russian authorities have learned a thing or two about dealing with popular anger since the protests of 2011-2012, adding that they’ll likely agree to lower the toll fee in addition to the penalties for non-payment.

There’s no guarantee it’ll work, but it appears to be part of a time-tested Kremlin strategy of taking the people’s temperature about the state's involvement in their lives.

“On occasion,” Pertsev wrote, “it looks as though they are testing the pain threshold of the public to see how much it can bear.”