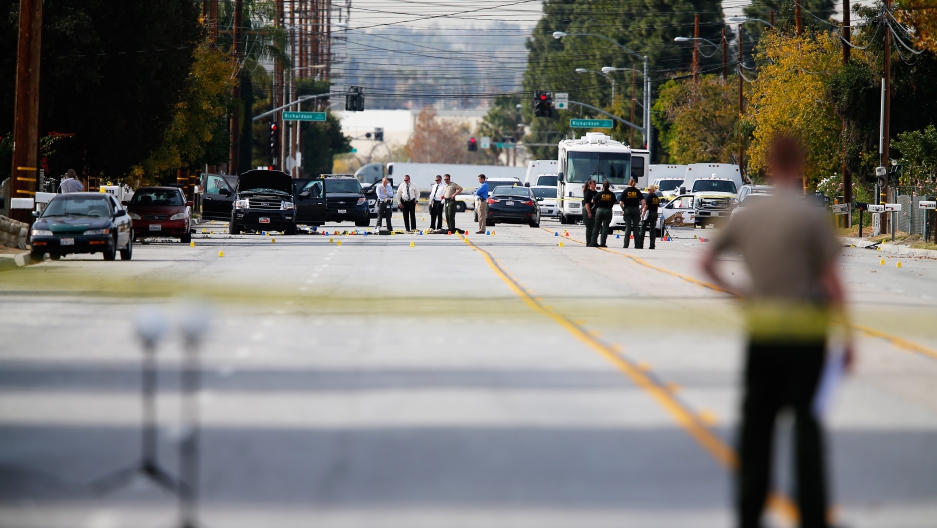 Police and Sheriff's Office Crime Scene Iinvestigators examine evidence at the scene of the investigation around an SUV where two suspects were shot by police following a mass shooting in San Bernardino, California December 3, 2015.

For the longest time, whenever there was a mass murder back home in the US, I’d struggle with how to explain it to our American kids here in Spain. When they were really little, this was my go-to tactic:

This approach worked very well for, I’d say, a few hundred tragedies (or a few thousand deaths, depending on how you prefer to measure it). Then came Sandy Hook. Our kids, then a bit older, caught wind of the massacre at their own school in Barcelona and came home horrified. I was frank about what had happened. But I was able to convince them that they were safe. In Spain that was pretty easy. Virtually no one here has guns.

Since Sandy Hook, we have not hidden the truth of these events from them. The images, sometimes, but never the facts of the cases, should they ask.

With mass killings now a daily affair back home, I’ve lost count of how many times we’ve discussed them, sat on the couch watching the live images of evacuations, the tearful testimonies of survivors, the politicians offering prayers. In my head, I always think, this must be just astoundingly other-worldly for them. All three of our kids, ages 11, 9 and 4, were born here in Barcelona and have never spent more than 10 days in the US at a time. They speak English, we visit every year and they identify themselves as Americans — although just not with American culture. By virtue of growing up overseas it’s simply never been theirs.

In the place where they live, people are not exterminating each other. There are a few murders a month in Spain, nationwide, usually crimes of passion (Spain has a big macho problem, with too many women dying at the hands of their husbands and lovers), but there’s almost never any mass killings. I can remember just one in the 12 years we’ve lived here.

The flipside of our gun-free lives here though is that our children associate life in America with the possibility of being shot. Not the faint possibility, the sort you can put into neat perspective by saying you’re more likely to die in a car crash, but a real sense, bolstered by events on the ground, that being an American in America means that, at any moment, some nutjob can blow your face off and all your friends’ faces off without even changing magazines.

So when the question comes up, now and again, of possibly heading back for a year to the US, and on the TV all you see is San Bernardino, and your kids are shouting No! We don’t want to go!, you wonder if it’s even worth it. I’ll always feel OK personally going back, but clearly our kids won’t. That’s a shame.