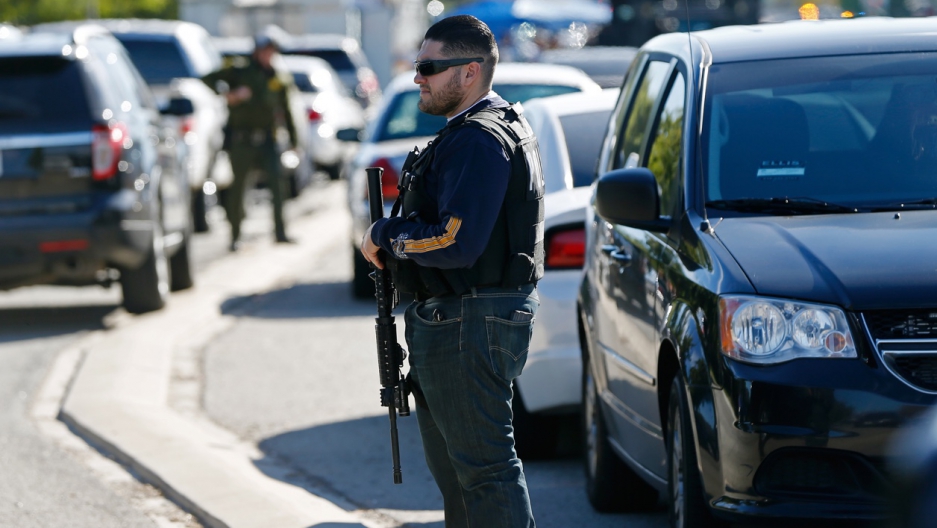 Police officers secure the area after at least one person opened fire at a social services agency in San Bernardino, California on Dec. 2, 2015.
Share

Despite all its efforts — a sprawling domestic surveillance program and wars abroad, for example — the United States is not able to keep its population safe from violent attacks, whether they are carefully planned terrorist strikes or mass shootings carried out by the mentally ill.

So far in 2015 there have been more mass shootings in the United States than days in the year. That’s more than one mass shooting a day, to be clear. (A mass shooting is commonly defined as an incident with four or more victims.) San Bernardino, California became the latest site of tragedy on Wednesday afternoon when at least two shooters armed with assault rifles and wearing tactical gear stormed a social services center, killing 14 people and injuring 17 others.

The shooting came just five days after a gunman killed three people and wounded nine in an apparent terrorist attack on a Planned Parenthood clinic. The attack in San Bernardino was the worst mass shooting since the massacre at Sandy Hook, when a 20-year-old stormed an elementary school in Connecticut, killing 20 children and 6 adults.

Police don’t know yet whether the San Bernardino shooting was a terrorist attack or something else. There appeared to be some level of planning. Police eventually shot the two suspects dead after cornering their car in a residential neighborhood. Confusing the narrative, however, police say the couple were either married or dating and had a 6-month-old baby. The male shooter worked as an inspector for the city and was at a holiday party at the facility they attacked that same morning. Coworkers said there might have been some kind of dispute during the party.

Whatever the motive, it is yet another mass shooting in the United States. Frustration among many Americans over the country’s inability to regulate the sale and spread of deadly weapons is growing. US President Barack Obama again called for gun reform on Wednesday.

But many Americans believe that guns bring security, and emphasize their right to own and carry firearms — even assault rifles — as protected by the Constitution. Founding documents aside, it’s not hard to see why Americans believe guns make them safer. The US government embraces the same philosophy in its efforts to secure America from threats abroad. The US supplies huge amounts of American-made guns to militaries and militias overseas, hoping they will be used against perceived enemies. Too often, though, those weapons fall into the wrong hands, or only exacerbate the conflicts that terrorist groups feed on. The Middle East and Afghanistan, for instance, are awash in American weaponry.

American gun manufacturers have powerful lobbyists. They lobby for weapons sales abroad — Saudi Arabia is using bombs it buys from the United States on Yemen, with tragic results — and they lobby to keep guns available for purchase at home. The lobbyists give lots of money to US lawmakers. Which cuts down the odds that those lawmakers are going to do much more than offer their “prayers” every time a mass shooting takes place.

Here is the latest example of the United States arming groups abroad: The Washington Post reports today that the CIA is funding and directing an Afghan militia in the eastern part of the country.

Obama announced earlier this year that 5,500 US troops would remain in Afghanistan to train Afghan military forces and to combat threats from Al Qaeda and the Islamic State. It prolonged for just a little longer America's longest war. But the Taliban has also been resurgent recently, taking back territory 15 years after it was ousted from power during the US invasion.

So the CIA has identified an Afghan militia to help it fight the Taliban. The intelligence agency has been down this road before in Afghanistan, back in the '80s when it supported Osama bin Laden and the mujahedeen in their fight against Soviet occupation. Those fighters grew into what we now know as Al Qaeda. If the United States could do it all over again, would it?

Apparently it would. The Afghan militia the CIA is now funding in its shadow war against the Taliban is known as the Khost Protection Force. From the Post: “The highly secretive paramilitary unit has been implicated in civilian killings, torture, questionable detentions, arbitrary arrests and use of excessive force in controversial night raids, abuses that have mostly not been previously disclosed.”

The article goes on to interview civilians, who are aware the Americans are backing the Khost Protection Force. They say they are frustrated that they have no legal recourse to fight abuses by the group. That is the kind of frustration that can lead someone down a violent path.

The US swears it isn't mission creep, but its mission in Syria certainly continues to change. Hours after the United Kingdom finally voted to add its jets to the dozen or so other countries bombing Syria right now, US Secretary of State John Kerry said airstrikes probably wouldn’t be enough to defeat the Islamic State.

If you were hoping he went on to talk about the need for long-term strategies to improve the lives of people in the region — maybe halting support for authoritarian governments, supporting social services, or promoting economic equality and justice — prepare to be disappointed.

Instead, America’s top diplomat suggested that someone should send in some troops. “I think we know that without the ability to find some ground forces that are prepared to take on Daesh, this will not be won completely from the air,” Kerry said, using another name for the Islamic State.