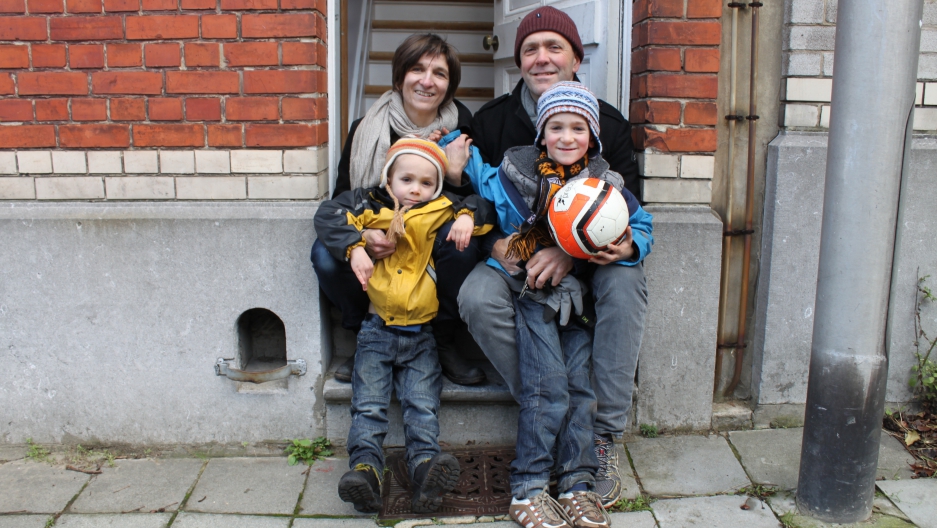 Michaela Bauer and Richard Bishop and their two boys enjoy a busy, comfortable life in cosmopolitan, multilingual Brussels. He’s British and works as a translator. She’s German and works for an international organization. Their sons speak French at school. Two weeks ago, they took in their first refugees, an Afghan family of five.

“There are quite a few people here in Brussels who have decided to take people in,” Michaela tells me over coffee in her kitchen. “Because it’s getting cold, it’s raining, it’s snowing and because we all feel that while we all can’t do everything, everybody can do a little bit to make their lives a bit more easy.”

"We talked about it for quite a bit," says Richard. "We tried to think what it was that we could do and we decided because we've got some space downstairs it was space that we could offer more than time. We were concerned about the disruption that it would bring but in the end we decided we would just go for it and see what happened and we're very happy that we have done."

The couple are part of an informal network of mostly expat volunteers who communicate through a Facebook group, Community Support for Refugees in Belgium. It was started by a Finnish woman, Ulla Pentinpuro, and a German, Anna Pethe, when they realized authorities were having trouble coping with the thousands of migrants arriving each month. The group quickly became a vital place to share information and coordinate donations of food, clothing and places to sleep.

Volunteers try to fill the gap between when migrants arrive and when they have their first appointment with immigration officials. Once new arrivals register and file their asylum claims they are assigned to government-run shelters, but before that they are on their own. The wait for an appointment can take anywhere from a few days to a couple of weeks. 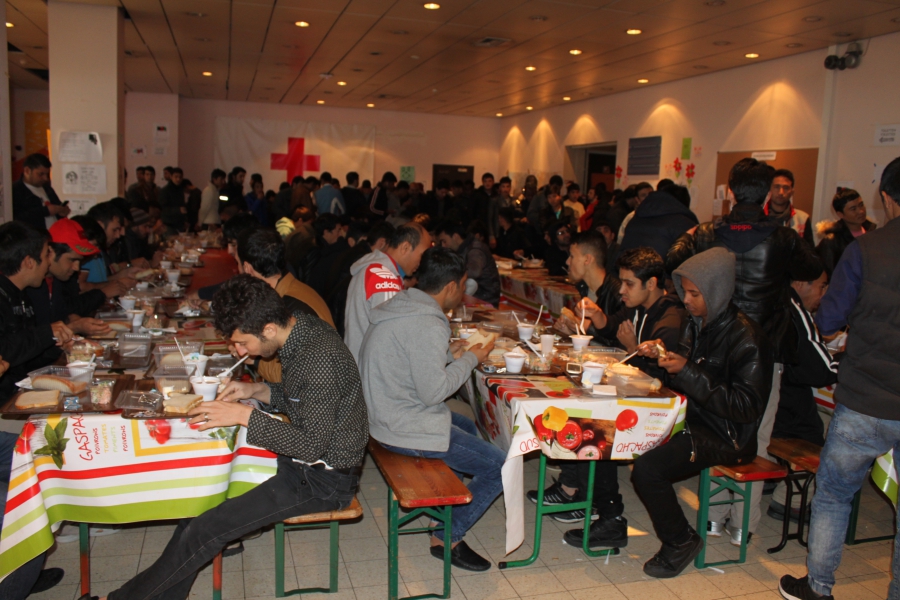 To help deal with the crisis, the Belgian Red Cross set up a 500-bed shelter in a converted office building downtown. But it filled up within weeks. Migrants gather outside when they have nowhere else to go and the Red Cross tries to connect them with people who can help. That’s where Michaela went to pick up her family in mid-November.

“They said please come and how many people can you take,” she recounts. “It was literally just this huge crowd standing outside in the rain under a small tent all completely soaking wet and cold. The faces of the children, in particular, but also of the parents when they realized that they were just going to go to somebody's place now and not have to stand there waiting any longer. That was wonderful to see and that was enough to confirm that this was the right decision to take."

The family she brought home were Shima, 35, and her husband Mohammedi, 32, and their three children, a girl of 8 and two boys, 5 and 13. All they wanted was a cup of tea and some food and their beds. They were exhausted.

When I visit a few days later, the five kids are romping around together and the house is full of laughter and the pitter patter of small feet. While they play, the rest of us sit and talk. Shima’s brother Rasul, in Germany, helps us translate by phone. Later, a Farsi-speaking colleague helps me fill in some of the gaps.

The way Shima tells it, she and her husband fled death threats in Afghanistan more than a decade ago. They have been living undocumented in Iran ever since. Mohammedi found construction work and they were able to rent an apartment in Isfahan, but life in exile without papers wasn't easy. At one point Mohammedi was picked up by authorities and sent back to Afghanistan. Neither of them could see a future in either country, so when neighbors in Iran decided to head for Europe, they seized the opportunity to go too.

They travelled from Iran to Turkey first, where they were arrested twice by police, and released. From Turkey they braved the dangerous passage to Greece in an overcrowded boat, and then made the now-familiar trek through Macedonia, Serbia, Croatia, Slovenia, Austria, Germany and on to Belgium by bus and train.

“When you leave you don’t think of yourself,” Shima says. “The reason for leaving is just thinking of the future of the children. There were lots of difficult moments on the boat. You don’t think that you can die the next moment. You try not to think about it. You think about the better life your children will have when you make this journey. That is the motivation.”

Shima is eager to tell her family's story, but she's cautious too. She doesn't want me to use full names or take photographs.

It’s not long after the Paris attacks when I visit with the two families in Brussels. In the US, the news that a Syrian passport was found near the body of one of the suicide bombers led to an outcry against refugees, for fear there might be terrorists among them. But Michaela and Richard say the attacks didn’t change their thinking.

"The Paris attacks had absolutely no impact on whether we would take people in or not," Richard says. "Absolutely none whatsoever."

Michaela says, if anything, the attacks strengthened their resolve to help.

“It’s clear that the terrorism and the violent extremism that is happening in Europe has happened first in the countries where these people are fleeing from. It’s the same people these people are fleeing that are now causing terror in Europe. And yes it feels suddenly as if world events have arrived at our doorsteps. But so be it. That means all the more we need to open our door and need to give people shelter. Because we are all in the same boat.”

Later, I tag along as the two families head out to a local playground. The kids play soccer on an old basketball court. The day is eerily quiet because Brussels is still under a security lockdown after the Paris attacks. Michaela tells me that it was her 5-year-old who helped her decide to take in refugees.

“About a month ago, when we were talking about refugees, he said, ‘Why don’t we have a refugee family in our house?' It put the finger right on my question mark in my head and the hesitation I still had to putting up somebody. When I told Richard about it he was also surprised and it gave us more courage to actually open the door. Because if the kids are asking it even, why aren't we doing it? That's very often the good thing about kids; they often ask the uncomfortable questions that we don't even dare to ask aloud. So it helped us make the decision."

Michaela also remembered hearing her grandmother tell stories about taking in refugees to her home in Germany after World War II. Michaela has a sense that something equally momentous is happening in Europe today.

“It’s such a big development. It is just much, much bigger than anything that has happened to our everyday lives in Europe over the past few decades. That’s why a lot of people have decided to do something about it," she says.

A few days after my visit, Shima and Mohammedi and their kids went to their appointment at the immigration office and filed their claim for asylum. They were assigned to a government-run refugee center where they will live, perhaps for months, until their case is decided. Michaela and Richard hope to track them down and stay in touch. Meantime they are ready to take in another family if necessary.