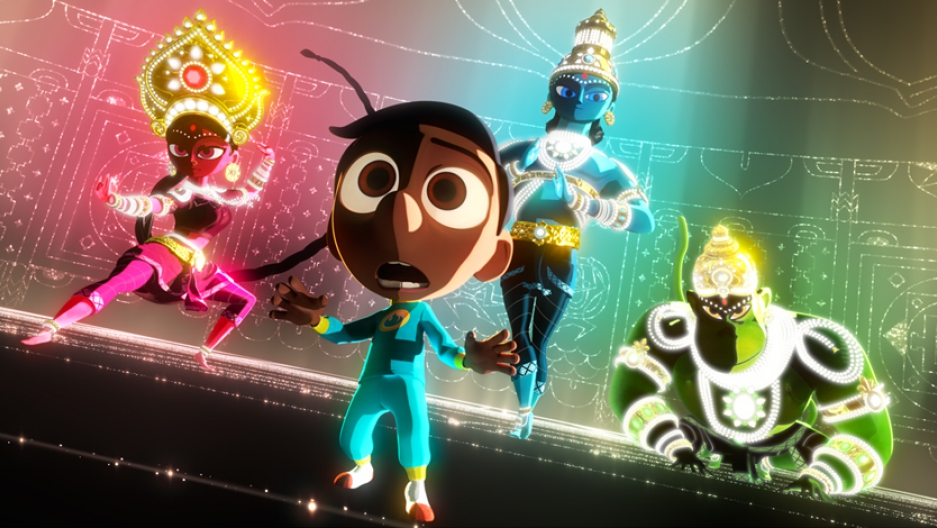 Back in the day, I loved going to the movies because the animated shorts were often as good as the feature.

UPDATE: The movie has been nominated for an Academy Award. It's one of five finalists for the animated short category.

The story opens with a young boy is watching cartoons, the volume turned way up. His father is in the same room, trying to perform a Hindu ceremony. Dad's not happy, and a battle over the volume — and remote — ensues.

Pixar's Sanjay Patel is the man behind this new short film. He says the volume battle scene is a page from his own life. "Everyday my dad would wake up and start a pūjā," says Patel. "It's a flower ceremony in the Hindu practice."

Patel's father would spend time setting up and then ring a bell. It was a signal to his sons to turn off the TV and come join. "And of course, I'd be sitting right beside him because we lived in a very small room ... And the TV was right next to the shrine and I'd be worshiping my gods that were the superheroes and the pain was that he would be worshiping his deities right beside me. Unfortunately, it meant that I'd have to turn off the TV. And that was really hard for me when I was growing up."

Eventually, after Patel's brother complained, his father stopped calling his sons over for the ceremony. The father never told Patel how he felt about it.

Nearly three decades passed before Patel and his father came to an understanding about Patel's observance of religion. "I think bit by bit my father really did understand that, you know, he's faithful by sitting and worshiping his deities and I'm just as reverent. It's just I sit on a Herman Miller chair looking at a Macintosh computer illustrating the deities and telling their stories. We're both devoted. We're just practicing it in a different way."

Patel's father doesn't care much for movies. The last he saw was that Julie Andrews movie, "The Sound of Music." He hasn't seen a single Pixar movie, even the ones Patel worked on. But Patel invited him to Pixar to watch this animated short. Patel says it was a surreal experience.

"He watched it. And he really broke down. He was really so proud. He was emotional. It was really beautiful. He reflected back to me what he felt the short was about. He was like, 'It's about a father and son. They look into each other's eyes and they figure out a way to compromise.'"