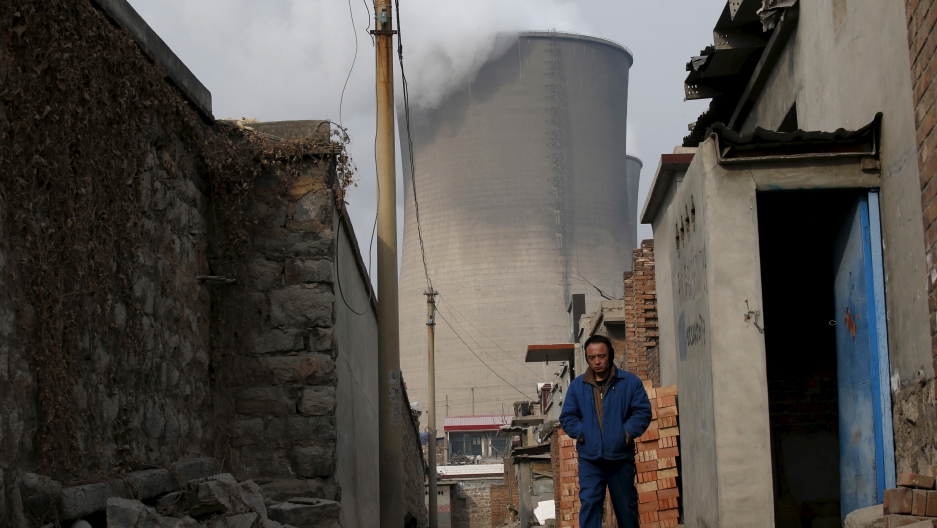 A man makes his way in a village located next to chimneys of coal-fired power plant in Shijiazhuang, Hebei province, China. On December 2nd, Beijing announced it would reduce its annual carbon dioxide emissions from coal-fired power generation by 180 million tons by 2020. The announcement coincided with the UN Climate Talks in Paris.

Recent scenes of Beijing smog so thick it made noon look like an apocalyptic dusk, were a vivid reminder to world leaders meeting at the climate change summit in Paris, of the urgent need is to reduce both greenhouse gases and the particulates that cause smog.

China’s own scientists and experts have issued an urgent call to action, with grim predictions of how climate change could affect China.

The recently released “Third National Climate Change Assessment Report” draws on the work of some 550 scientists and experts, to say that average temperatures in China have already been rising faster than the global average – about 1.6 to 2.7 degrees Fahrenheit thus far — and the trend is likely to continue. While the global goal is to limit future temperature rises to within 2 degrees Celsius (3.6 Fahrenheit) above the pre-industrial average, the report predicts that China’s temperature rise is likely to be more like 2.7 to 2.9 degrees Celsius (4.9 to 5.2 degrees Fahrenheit).

Climate change in China has already changed weather patterns, and could, in the future, increase flooding and drought, and make China’s long-standing priority of food self-sufficiency harder to sustain. Chinese coastal cities could also be at risk, as sea temperatures warm, glaciers melt and sea levels rise.

All this has caused a dramatic change in how China’s leaders approach the issue of climate change. Just a few years ago, at the 2009 Copenhagen Summit on climate change, Chinese negotiators argued that Western countries became affluent through their century or more of dirty development, and now it was China’s turn.

But as China’s development got dirtier, and air pollution got worse, Chinese people pushed back, and the government started to respond. Recent studies suggest that some 1.6 million Chinese die prematurely each year due to causes related to air pollution, especially the fine particulates that come from vehicle exhaust, and from burning coal.

Related, but not exactly the same, are the climate change-causing greenhouse gases emitted when fossil fuels are burned. Polls suggest that many Chinese care less about climate change than they do about pollution. This may be because climate change is an abstract, even remote concept, on which China’s state-run media has only recently begun to focus, whereas pollution — especially the heavy smog of recent days — is a reality people live with day to day.

Chinese leaders used to argue that pollution was a small price to pay for prosperity. Over China’s last two decades of scorching growth, it favored its cheapest available source of energy — coal — often burned inefficiently. “Made in China” came with emissions. Chinese manufacturers churned out iPhones, computers, clothes and toys, made more cheaply in China, in part because regulations on emissions were lax. According to a recent report in Nature Climate Change, some one-fifth to one-third of Chinese climate change-causing emissions came from manufacturing for export – putting inexpensive goods into the hands of Walmart shoppers.

So when Chinese leaders have retorted to accusations that all these emissions are globally irresponsible, that the West just outsourced its emissions to China, they weren’t being entirely disingenuous.

China has also taken flak for releasing revised figures over the summer that show it’s been using 17 percent more coal than had previously been reported — causing about the same amount of annual emissions as Germany.

The good news is, China’s leaders have pledged to cap total CO2 emission by 2030. Coal use was already down last year, possibly because of slowing economic growth, but also because of efforts to improve efficiency and shift to other forms of energy.

“Actually, all the energy experts I’ve talked to think they’re going to peak sooner than that,” says Deborah Seligsohn, a former US diplomat and founder of the World Resources Institute’s climate program in China, now a researcher at UC San Diego. “And some people are pushing for committing to a peak as early as 2022.  That’s a huge change.”

And as bad as the air is, China has already achieved the pollution reduction targets set out in its 2010 to 2015 five-year plan, the state-run news agency Xinhua has quoted Environment Minister Chen Jining as saying. He said emissions from sulfur dioxide are down 12.9 percent, from ammonia nitrogen down 9.8 percent, and from nitrogen oxide down 8.6 percent from 2010 levels.

Chen said China had reduced ozone-depleting substances by some 250,000 tons. However, he said, some 25 million tons of pollutants were still being emitted in China each year, and had to come down another 30 to 50 percent. China is tackling that challenge both by increasing its use of renewable energy, and by improving the way power plants use coal, when it must be used.

“They’ve put continuous emissions monitoring equipment on all power plants in the country,” Seligsohn says. “It’s connected online, in real time, to every level of government, from the local district to the central government. Anyone can take a look and see whether the scrubber’s on at any given power plant. And the way they’ve structured payment for electricity is that the power plant gets a base payment, and it gets a green subsidy for running the scrubber. And the profit is built into the green subsidy, not into the base price. So basically, the power plants lose money unless they’re running their scrubbers.”

“It’s a machine. You turn it on. It uses energy,” Seligsohn says. “It actually reduces efficiency at a power plant by about five percent.”

That means more climate change-causing emissions in the short run, but less life-threatening particulate pollution. The thing is, China has a lot of different tasks it has to do. And sometimes these tasks produce co-benefits, kind of help with each other, and sometimes, you have to deal with the fact that they don’t.”

However, Seligsohn says, China is focusing on making its power plants more efficient to begin with, and has begun exporting that technology to other developing countries, so they don’t have to repeat China’s mistakes.

“China is now the major seller of coal-fired power plants around the world,” she says. “So coal is still a problem, but if you’re going to use it, use the most efficient one you can. They’re also the leading producer of pollution-abatement equipment. They’re also major, major producers of more efficient producers of equipment for producing things like steel. So as other developing countries go through their infrastructure build-out, there are lots of efficiency gains they can get pretty cheaply, because the Chinese have already produced them.”

Having for so long been, along with the United States, part of the problem contributing to climate change, China is now accelerating its efforts to be part of the solution. Still, Chinese President Xi Jinping reminded those assembled in Paris that climate change is only one concern in many of the world’s developing countries, which may need help in finding a cleaner path to prosperity.

President Obama, in his opening remarks, acknowledged different circumstances in different nations. He urged action that both rolls back greenhouse gas emissions and pollution, and helps economies grow.

“The growing threat of climate change could define the contours of this century more dramatically than any other,” he said, and later added: “I’m convinced we’re going to get big things done here.”