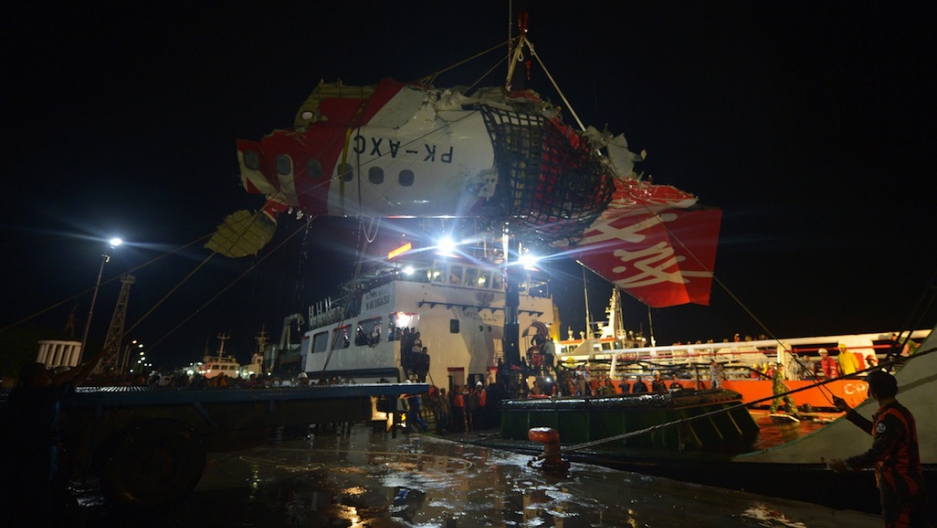 Indonesian personnel hoist a section of recovered wreckage belonging to AirAsia flight QZ8501 onto a truck at port in Kumai on Jan. 11, 2015.
Credit: Adek Berry
Share

It looks like we finally know what happened to that AirAsia flight that crashed last December over the Java Sea, killing all 162 people on board.

Investigators say the Airbus 320 had a technical malfunction. But it was the way the pilots responded to that malfunction that caused the plane, ultimately, to crash. The pilots weren't trained on how to respond. And the malfunction was an ongoing problem that probably should have been fixed before the flight ever took off. So it seems many departments at AirAsia played a role in the catastrophe.

Here is what investigators say happened: The plane's flight control computer had a cracked solder joint. Through a string of technical failures that cracked solder joint caused the rudder to malfunction. The plane began to shift to an angle of greater than 45 degrees, which is called an “upset.” The pilots didn't correct it properly. In one telling exchange lifted from the flight recorder, the captain told the co-pilot to “pull down.” Normally the captain should say “pull” to go up, and “push” to go down. So “pull down” isn't very clear.

The AirAsia pilots weren't even trained on how to deal with an “upset” because the kind of plane they were flying is supposed to be immune from such problems. Tragically, it's not. What's more, the exact malfunction happened on the same plane 23 times in the year before the crash. And the problem became more common as the year went on. Yet it was never addressed.

AirAsia is an incredibly cheap budget airline headquartered in Malaysia. And it's starting to become clear some of the ways the company manages to cut back on costs.

Fayadh is an artist and poet of Palestinian origin. He is technically stateless but has lived in Saudi Arabia all his life. He is well known in the independent art scene in Saudi Arabia. The accusations against him were based on poems he had written years earlier.

His death sentence set off a firestorm online. People all over the world came to the poet's defense, comparing Saudi Arabia's actions to those of the Islamic State, which also beheads people for apostasy. The hashtag #SaudiArabiaIsISIS was born. Like all internet rage, though, it quickly burnt out. Everyone moved on to other things.

Now a Saudi official from the country's Ministry of Justice is breathing new life into the internet's outrage. The official announced that Saudi Arabia would sue Twitter users who compare the country to the Islamic State. The hashtag #SueMeSaudi was born. This is trending today. But it probably won' be trending tomorrow.

Fayadh, meanwhile, only has a couple weeks left to appeal his death sentence. It's looking pretty unlikely that he will succeed. Saudi courts have become more harsh in recent years. A liberal blogger was sentenced to a public flogging. A protester got the death sentence for crimes he committed as a minor. A British man found with alcohol got 350 lashes. He eventually avoided the flogging but still spent a year in jail. The list goes on and on.

This is one of America's closest allies.

The Giant Magellan Telescope in Chile is appropriately named. It is huge.

The GMT, as scientists call it, is under construction on a seriously remote hilltop some 8,000 feet above sea level in Chile's Atacama Desert. You can believe there is very little light pollution around there.

The telescope will be capable of capturing the sharpest images of any telescope ever built, thanks to seven curved mirrors with an optical surface of about 80 feet in diameter. Its resolution will be 10 times better than that of the Hubble Space Telescope.

The goal of the telescope is to answer the question we have all asked: Is there life elsewhere in the universe? In its search, the GMT will look past the edges of the universe, billions of light years away. It will essentially be looking back in time to when many of our stars and planets were just beginning to form.

Before you get too excited, it isn't finished yet. It's due to be ready by 2021. So expect to know a lot more about aliens in about five or so years.