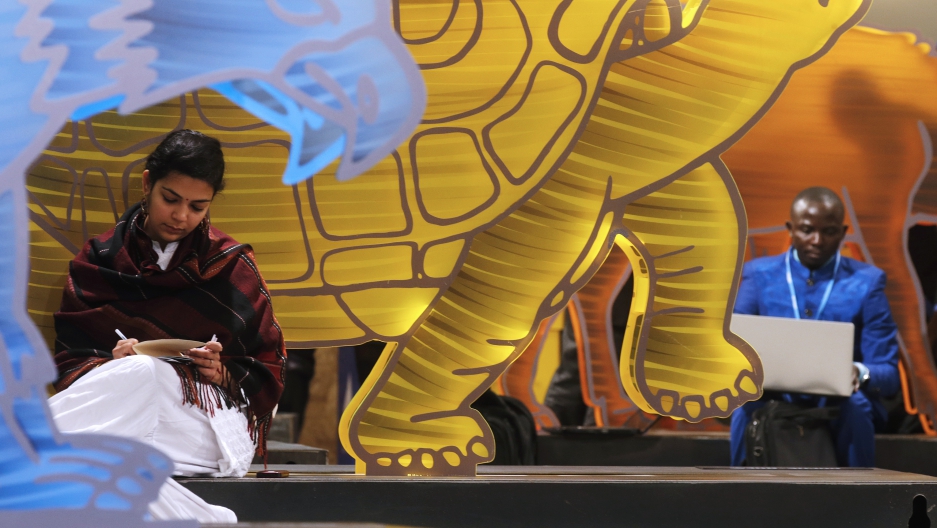 Will a battle over two words — "shall" and "should" — decide the fate of mankind?

Negotiators gathered in Paris are trying to craft a historic global deal by Dec. 11 to save humanity from a feared climate catastrophe.

But in front of them is a 54-page draft of mind-wrenching complexity — a textual labyrinth where gremlins and booby traps lurk in every dark corner.

It has been described as the most complicated international agreement ever attempted, committing every nation to action to roll back carbon gases that act like a blanket, trapping the Sun's heat around the Earth.

The post-2020 pact has far-reaching consequences for everyone, from low-lying islands that risk being swamped by rising seas to poor nations that demand the right to power their way to wealth by burning fossil fuels, the biggest source of so-called greenhouse gases.

With stakes so high, every word counts.

So, in the draft deal, for example, negotiators have to decide whether to use the word "shall," which is mandatory, or "should," which is just a guideline.

It is a choice that comes up not once, not twice, but 34 times in the draft text.

It is a tradition that whenever there is a disagreement over the wording of proposed international accords, the disputed text is placed in brackets for participants to make a decision later.

Such are the divisions over the climate pact that the text has become an almost laughingly turgid tangle.

An attempt had been made by conference organizers in Bonn, Germany, in October to reduce the draft agreement to a simpler 20 pages.

But then negotiators were asked for their reaction, and the draft mushroomed back to more than 50 pages, with many of the options that had been deleted re-inserted.

The result was a document that looked even more like two plates of spaghetti than before.

"The specific greenhouse-gas stabilization target, its timeframe and the national mitigation/adaptation contributions are all unresolved. If anything, these sections are harder to follow than the previous drafts."

The goal of the post-2020 agreement under debate is to curb the planet's temperature rise to below, or well below, 1.5 or 2.0 degrees Celsius (2.7 or 3.6 degrees Fahrenheit) above pre-Industrial Revolution levels.

In the long term, it could aim for decarbonization — removing fossil fuel burning from the economy — or zero net carbon emissions by 2050, or by 2070, or by 2100.

With such an ambitious goal, and so many interests at stake, it's no surprise that there are so many disputes, and the document is so wordy.

But the legal experts say there is nevertheless a gaping hole.

"Studies have shown that 82 percent of today's fossil fuel reserves must remain in the ground to avoid 2 degrees of warming," Deconstructing Paris said.

Despite this straightforward logic, the legal team said, there is no reference in the draft agreement to reducing international support for fossil fuels.

"This continued omission implies that it has been considered politically unrealistic to tackle climate change by directly considering fossil fuel production."

Like a game of three-dimensional chess, the fight over text is taking place at several levels.

Member states have set up a working group of 80 heads of delegations from around the world to pore over the document, said a source close to the French team.

Negotiators have been tasked to hold mini-meetings over each point, the source said. They have to report back and say "if it has been resolved. Or not."

Beyond the centralized "contact" group, which meets once or a few times a day with all the heads of delegations, there are "spinoff" groups, which meet separately on thematic issues, such as reducing carbon emissions and helping countries adapt to climate change.

Then there are informal groups within informal groups — "informal informals" in climate jargon — that seek to thrash out issues among a small cluster of nations at odds.