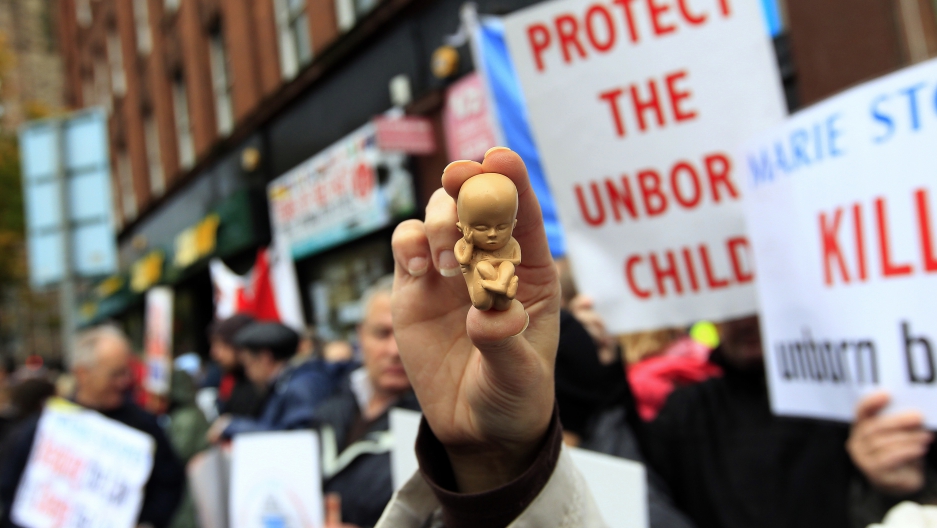 Pro-life protestors demonstrate in Belfast. Even after a new court ruling, abortion remains illegal in Northern Ireland in most circumstances.

Heather Low knows that on any given work day, she can expect to be confronted by protesters outside the building where she works. “They were outside today," she says. "Usually there’s two or three people."

Low is a counselor at one of the Belfast branches of the Family Planning Association (FPA), an organization that advises women on reproductive health — and how to terminate a pregnancy if they wish. In most of the United Kingdom, abortion has been legal since the 1960s. But in Northern Ireland it is still banned in almost all circumstances, forcing women who wish to seek a termination to travel elsewhere, usually to England. But the law may be changing, albeit slightly. The Belfast High Court has ruled that forbidding access to abortion in cases of rape, incest or serious fetal malformation (where the fetus is unlikely to survive for more than a short of time after birth) is a breach of human rights.

But long before this ruling, Low says the FPA offices have been regularly picketed by demonstrators. "They are here from early in the morning until we go home in the evening," she says. "Once they establish that a woman is coming to us, they follow them, harass them, talk to them about murdering their babies, [how] they are never going to recover if they have an abortion."

For Low and other staff at FPA, the ruling is a welcome relief. Their advice center has seen women whose pregnancies fall into categories covered by the ruling, but who cannot travel out of Northern Ireland.

"I think the change will make a difference," she says. "[But] the law, as it stands, says that the women's life has to be at serious risk — not the survivability of the fetus."

For everyone at the FPA, the presence of picketers is a constant concern. On occasion, the activists have gone further than peaceful protest. One demonstrator was convicted earlier this year for assaulting an FPA staff member. And all the staff feel watched. Low says she was once shopping for shoes at a department store when a woman approached her.

"She was coming, up telling me what a bad person I was, and that she knew what I was doing and so on." Low says she was shaken, but determined not to be intimidated. "I just carried on with my shopping."