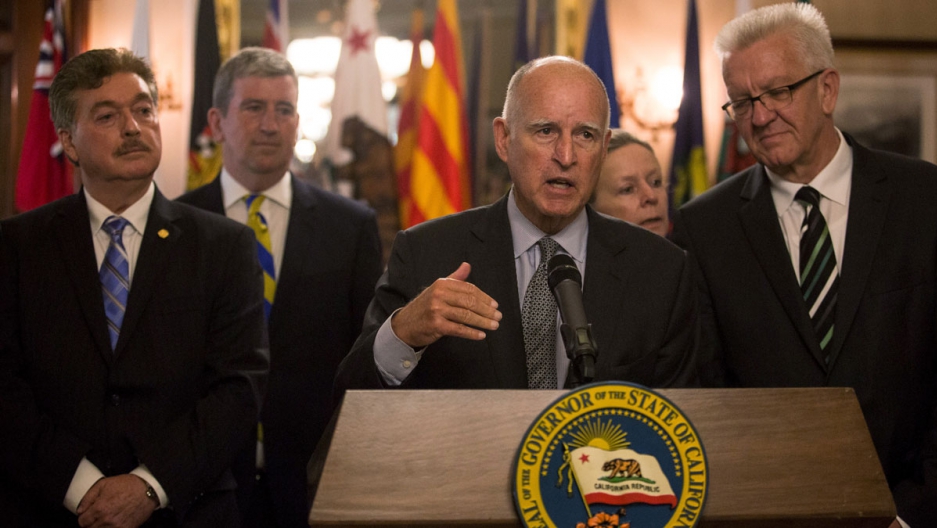 California Gov. Jerry Brown speaks before signing an agreement with 11 other international states and provinces to limit the increase in global average temperature to below two degrees, in Sacramento, California May, 2015.

"Our energy efficiency solutions, some are great for here in California, but some are actually better for the rest of the world," Miller says.

In recent years California has become a major incubator for green technology, and the policies to promote them.

And Governor Jerry Brown wants to export a little of his state’s magic globally. He’s carrying an agreement among local jurisdictions around the world to Paris: Dozens of cities, states and provinces promising to take action toward stopping global warming at 2 degrees Celsius. Brown wants negotiators to take note.

"We are mere subnational units," Brown says. "That’s not a very glorious title, to be a subnational. Sounds a bit underground. Nevertheless, there’s flexibility in being a state or a region.

California’s example really began back in the 1970s and Brown's first turn as governor. Back then the state won the right to get tougher on air pollution than the rest of the country. The state’s top air regulator, Mary Nichols, says they used it on the largest source of smog: cars.

Climate change wasn’t really on the agenda back then. But it’s front and center now. And Nichols now oversees the toughest climate pollution policies in the country. She’s worked with Brown since he got tagged as "Governor Moonbeam" for pushing what many people at the time thought were far-out ideas.

Now — what Brown was talking about in 1980, while running for president — doesn’t seem so far out.

"I would want a full scale commitment to cogeneration — the recapture of waste steam, to small scale hydroelectric plants, to solar, to photovoltaics, to all of the alternative energies," he said at the time.

Another idea Brown promoted 35 years ago, to let people sell electricity back to the grid, now looks like this in California: Crews rolling out seven days a week to put solar on homes and box stores outside LA.

"I think it’s just the state mentality, you know? Californians, progressive in everything they do," he says.

Sure, Harmon sounds mellow about it — but Solar City is a huge player here in California, the eighth-largest economy in the world. California’s energy use per person has stayed flat since the 1970s, its carbon emissions per person have fallen 14 percent since the turn of the century, and its economy is growing faster than the rest of the country.

And it’s not all the work of Democrats. Former Republican governor Arnold Schwarzenegger was bullish on climate action and signed the state’s groundbreaking climate pollution law in 2006.

Californians aren’t alone in thinking their climate work is awesome, as Cristiana Figueres, the UN diplomat leading the Paris talks, told the state’s lawmakers this year. Figueres said the state sends a loud and important signal to the rest of the world.

"You have been able to implement and prove what the entire world wants to achieve now in Paris," she says. "And that is: That it is possible to continue growing your economy, to continue increasing your GDP while bringing down your greenhouse gas emissions — to de-link those two curves that traditionally and historically have been one and the same."

Of course not everyone sees California as the world’s leading light on climate. Robert Stavins, an environmental economist at Harvard, says Californians believe that they are of "greater significance to the international climate world than they are."

Stavins points out California itself is responsible for only about 1.5 percent of the world’s emissions. And while California’s efforts to lead by example have worked locally, all that awesomeness hasn’t added up to much climate action outside the state — yet.