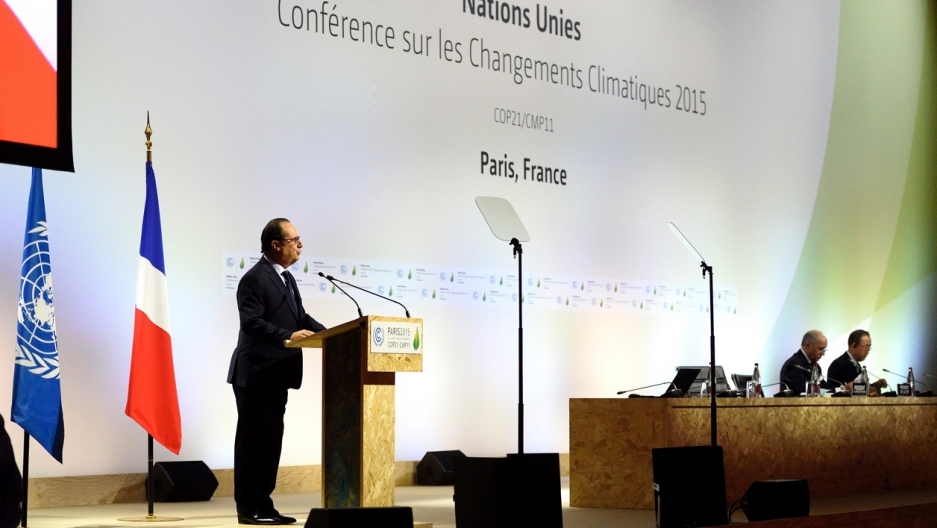 French President Francois Hollande delivers a speech during the plenary session of the COP 21 United Nations conference on climate change, on Nov. 30, 2015 at Le Bourget, on the outskirts of the French capital Paris.
Share

Another major UN conference on climate change is underway in Paris. And already it is showing signs that times have changed. US President Barack Obama said during a speech on Monday that the United States was partly to blame for climate change.

That might seem like an obvious statement. But it’s actually a big deal. For decades the United States was one of the biggest hurdles  — along with China — to negotiating a new global climate treaty. Year after year, the superpower refused to sign any binding agreements. This year might be different.

“ … The United States of America not only recognizes our role in creating this problem, we embrace our responsibility to do something about it,” the American president said.

These days one of the major blocks to any agreement is a feeling among poorer nations that they shouldn't have to limit their economic progress to pay for the sins of rich countries. After all, they say, the United States freely felled most of its forests a long time ago without any repercussions, and exports a huge amount of its emissions.

Wealthier countries, however, may now be more willing to offset the costs that countries like India and Indonesia will likely have to endure in order to stem the warming climate.

China, too, is saying the right things. Chinese President Xi Jinping called Monday for rich nations to honor their commitment to provide $100 billion a year to developing countries to tackle climate change, according to Agence France-Presse.

Words, however, are not actions. And this conference is just getting underway. Stay tuned.

With American help, a coalition of Arab countries led by Saudi Arabia is obliterating Yemen. They’ve been doing so for going on eight months now, and there is no end in sight. The air assault has killed thousands of civilians and destroyed hospitals, schools and other civilian infrastructure.

Some of the attacks appear to constitute war crimes. The United States is providing weapons and logistical aid to the Saudis, which means the Americans might be complicit in any crimes as well.

GlobalPost traveled across Yemen earlier this month to investigate some of the bombings that have devastated entire towns. We visited the site of an airstrike that hit a wedding party, killing 43 people, and spoke to the survivors. We traveled to northern Yemen to visit the site of an airstrike that hit a Doctors Without Borders hospital and talked to survivors there. We traveled to villages that have been terrorized by cluster bombs, which are banned by much of the world for the heavy impact they have on civilians. We spoke to survivors there too. And we traveled to the coast, where airstrikes wiped out a fishing community — a story the world’s press almost wholly ignored.

More than 2,500 civilians — 637 of them children — have been killed so far, according to the United Nations. The UN expects the actual toll to be even higher because many of the dead or injured never reach medical facilities and so go unrecorded.

Saudi Arabia is waging its campaign against a Yemeni rebel group known as the Houthis, which captured the capital of Sanaa earlier this year. Saudi Arabia thinks the Houthis are being supported by Iran, its arch-nemesis, though just how much Iran is involved is disputed. Saudi Arabia, like the United States, also aims to re-install a friendly government in Yemen.

In the middle of it all are average Yemenis, many of whom are wondering when the world is going to notice what is happening to their country.

The National Security Agency’s ability to bulk-collect the metadata from Americans' phones has expired. Among all the issues relating to rights to privacy and domestic surveillance, it is a modest victory. But it is a victory nonetheless.

And it is a direct result of the actions of Edward Snowden, the NSA whistleblower who is now living in exile in Russia for fear of arrest and imprisonment in the United States.

Snowden’s leak led to a massive outcry among Americans over the limits of the US government’s ability to monitor its own citizens. Suddenly, Americans realized just how far the government’s domestic spying operation had gone. And in a time of political polarization, pretty much everyone agreed it had gone too far.