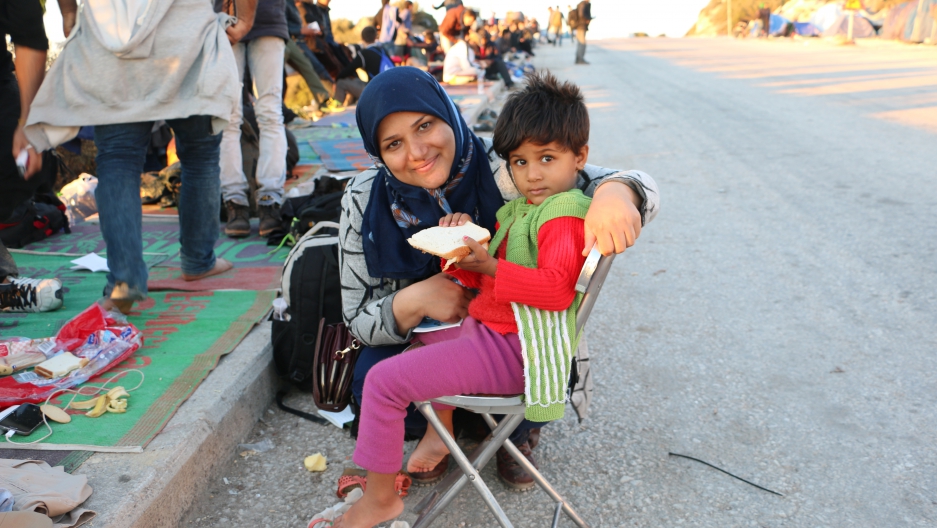 Nasra Saddam and her daughter Rimas sit with their relatives on a road in Lesbos where they wait for a bus to take them to the capital of the island, Mytilene, and from there, on to mainland Europe. This morning they arrived on a boat from Turkey and before that from southern Iraq.
Credit: Laura Dean
Share

LESBOS, Greece — A decade ago, under pressure from her brothers, Nasra Saddam got married to a man she had never seen. She was 22.

“He would hit me and insult me,” she says. “A week after we were married I discovered he was a crystal meth addict. I didn’t go to my family because a domestic dispute has to be between the husband and the wife, even though he hit me.”

Nasra is part of an Arab minority from the Iranian city of Ahwaz, a deeply conservative place near the southeastern border of Iraq. She split her time between there and southern Iraq, where her parents now live.

Nasra stayed with her husband for five long years. It was her daughter who finally pushed her to end the marriage.

“I got divorced when I found out I was pregnant. After that I didn’t go back,” she says. “I didn’t want my daughter to live with a father who was an addict. I didn’t want it to affect her life.”

After the divorce, Nasra's brothers decided they would marry her off a second time. She was depressed and for a while holed up in her room. At first she considered moving to Iraq where her parents live; she had been visiting them every month or so. But then, thinking of her daughter, she mustered her strength and made the difficult decision to pack up and leave.

Now she's part of another group: hundreds of thousands of refugees and asylum-seekers fleeing the persecution at home for the shores of Europe.

“In Iraq, life was better than in [Ahwaz], the society was a little bit more open,” Nasra says. But Iraq has changed in the last year and a half. The Islamic State has taken over large portions of the country, inflicting its brutal rule on populations under its control. And the United States is again launching regular airstrikes. Iraq is no longer a safe place for her or her daughter.

“I was scared because of Daesh and the endless war,” she says, using the Arabic acronym for the Islamic State.

Nasra left her parents in Basra, Iraq two months ago. From there she went to Ahwaz, where she gathered the family members she trusted, packed up, and led them on a journey toward Europe. From Iran they traveled overland to Istanbul, where they took a bus to the western coast of Turkey, near Izmir. There, the family boarded a boat bound for Lesbos. They arrived on a sunny morning, wet and terrified but unhurt, and — most importantly for them — in Europe.

Nasra beams when she talks about her daughter, Rimas. She is now almost four years old. “She has a big future. She is so smart,” Nasra says. Nasra was only ever allowed to get a middle school education, no further.

Rimas responds to her mother alternatively in Arabic and in Farsi. She says she’s excited to learn German. She’s been told they are headed to Berlin. She sits on a small chair on the edge of a winding Greek island road, swinging her legs, laughing and teasing her older relatives who have all come, in one way or another, to help secure her future.

Nasra doesn’t yet know exactly where she’s leading her family, though. They have only just arrived in Lesbos.

“We are going to Germany, maybe Berlin. They said Finland is nice.”

“You said we were going to Finland!” says the only other woman in the group, a cousin. “Now you want to go to Germany?”

“Maybe we’ll go to Finland. It’s crowded in Germany and we want to lighten the burden for them. And if we don’t like it we’ll go back to Germany.” Her cousin rolls her eyes and laughs.

What Nasra knows for sure is that she wants to be independent. “I came for freedom, for independence for me and my daughter. I want to work and finish my studies.”

The mood is jovial. There is a sense of overwhelming relief. “We saw death with our own eyes,” Nasra’s nephew says. He is happy they made it safely. But he is anxious for the long road that is still ahead.

“Will they welcome us? Do they like Arabs? How about Iranians? Does it make a difference?”