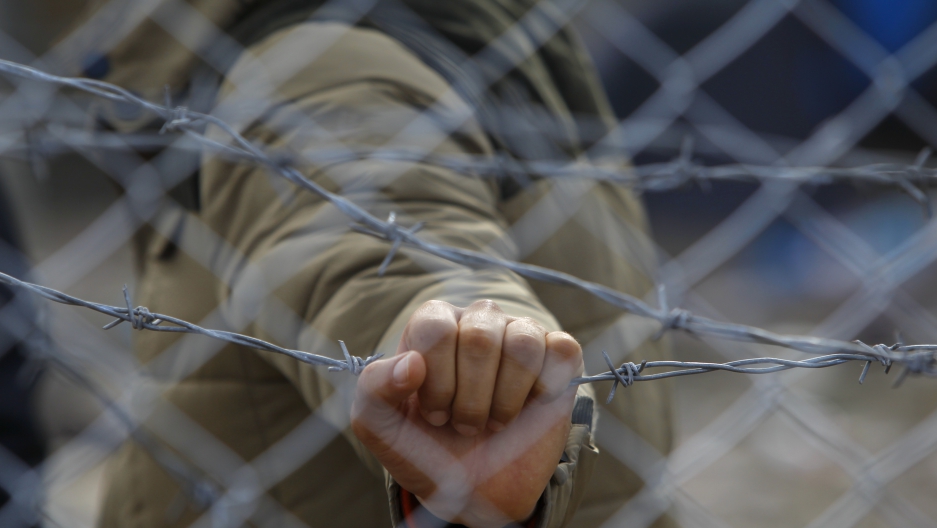 A migrant holds a barbed wire fence at the Macedonian-Greek border, near Gevgelija, Macedonia, November 29, 2015.

Having citizenship from and being bound to one nation was never intuitive to journalist and author Atossa Araxia Abrahamian.

Of course, she's had three citizenships she can remember.

"I'm a Swiss citizen, an Iranian citizen [...] and I'm also Canadian because I was born in Canada," she says.

Abrahamian was born to Russian and Armenian parents who lived in Iran. Her mother was vacationing in Canada when she was born and she was raised in Switzerland.

"I feel very privileged to be lucky enough to be able to cross borders more or less as I please," she says. But in her work as a reporter, she found out that the concept of borders is much more flexible than it appears.

Her research led to a book called "The Cosmopolites: The Coming of the Global Citizen."

In the book, Abrahamian writes about "passport conventions," in which citizenship is put up for sale.

"They brand themselves as Global Citizenship Junkets," she explains, "so rather than buying a citizenship or buying a passport, which sounds a little bit shady, [...] you're becoming a global citizen."

Abrahamian says these conventions feel like any ordinary conference except that here, countries will present their citizenship as a commodity.

"So the prime minister or a representative would go on stage and say 'well, we have very little taxes, we have a very stable government, we have beautiful beaches. If you buy a condo worth $400,000, you can have a passport for free,'" she says.

Typically accountants, lawyers and bankers who work for the rich make up the audience.

Abrahamian says depending on where you are from, there are various reasons why you'd be interested in owning a second or third citizenship. But the top reasons? Security and mobility.

For example, she says, if you come from a Middle Eastern country with "bad passports" — bad meaning you can't go to many countries without getting a visa — then another citizenship might be of interest to you.

Others might be looking to evade paying taxes and would be interested in tax havens. Also, if you sense that your country is heading toward war and instability, you might be interested in a ticket out. Political instability is another factor behind interest in acquiring new citizenship.

But, of course, all this is happening at a time when thousands of Syrian refugees are being stopped at borders in Europe.

"It's well-known that refugees from the Middle East and Africa are taking these arduous journeys to get to Europe," she says, "and what most people don't know is that a millionaire, a billionaire from Libya can become an EU citizen in under a year, just by investing in Malta."

Malta sells its citizenship for a little over $1 million, according to Abrahamian.

For her, that a person can purchase citizenship shows how artificial borders are.

"They apply a lot more to the poor than to the rich. [...] Borders are alive and well but for a price you can flatten them," she says.

The Cosmopolites: The Coming of the Global Citizen