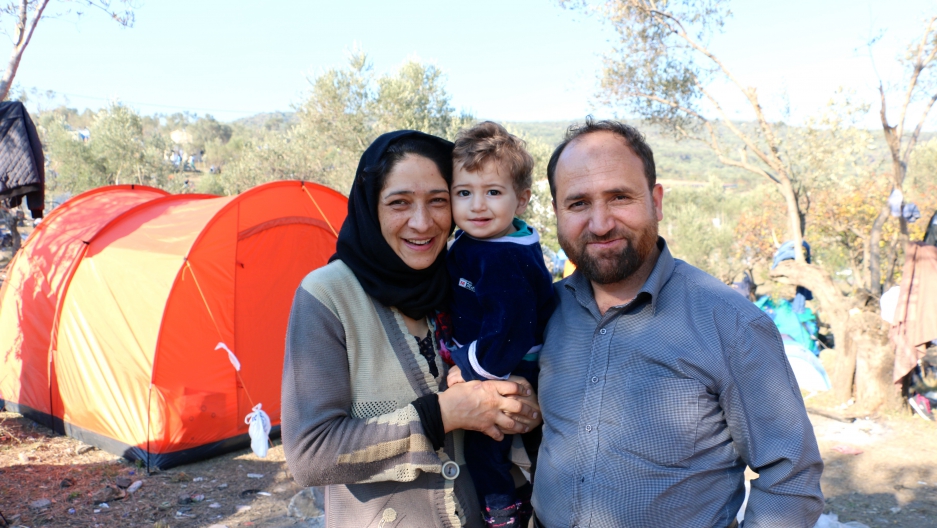 Aiysha and Nadir and their two-year-old son Mohamed fled Kunduz when the Taliban marched in earlier this fall. THey only had enough money to bring their youngest son. Their other two older sons are with their grandmother in Pakistan.
Credit: Laura Dean
Share

LESBOS, Greece — A month and a half ago, a piece of paper appeared on Nadir’s doorstep. It was a summons to his own trial.

“I didn’t see who delivered it but it was stamped with their official stamp,” he says at an informal refugee camp in Lesbos, Greece. He along with his wife Aisha and their toddler son Mohamed are sleeping rough along with about 4,000 others because there is no room for them in the police-run camp on the island.

“We left everything but ourselves and our clothes,” he says. Sometimes by car, sometimes on foot, Aiysha, Nadir and baby Mohamed made their way over five weeks from Kunduz to Kabul, from Kabul to Herat — where Aiysha’s family is from — from Herat to Mashhad, Iran, from there to Tehran and on to Turkey.

More from GlobalPost: A week on the migrant trail

“Aiysha’s not usually this tan,” Nadir laughs. “We’ve done so much walking, look at our feet!” He points to their callused soles as they sit cross-legged on the ground, using a mylar blanket to sit on.

There is no proper sanitation in the camp so people are relieving themselves wherever they can. Doctors fear that cholera and other diseases may break out when the rains come.

Both professors of Islamic studies, Aiysha and Nadir speak formal Arabic in addition to their native Farsi. They only had enough money to pay for the journey for the two of them and their youngest son Mohamed who is 2. Their other two sons, Karim, 14, and Saad, 9, were taken by their grandmother, Nadir’s mother, to Pakistan, where they are in school. Nadir's father was killed in the bombing when the Taliban marched into Kunduz two months ago. ​Aiysha and Nadir met at the university 15 years ago and got married. “It was a love marriage,” says Nadir, beaming at his wife and tiny son.

“We are going Denmark where we hope for a calm life without war,” Aiysha says. Her sister has lived in Denmark for 20 years. “We have to get there first, then we will do family reunification,” says Nadir, “We want a happy life in a place that respects human rights.”

Aiysha is pregnant again. But only two months and she hasn’t been to the doctor yet since she’s been traveling.

“God willing we’ll see a doctor in Denmark,” she says, but that could be weeks away.

For the couple, education is the thing they value the most.

“I want to study Danish so I can teach. I love studying and teaching, that was our life: from home to the university and back again,” says Nadir. “I’d love to teach at a university or at a high school.”

The Taliban’s stance on education, Nadir explains, is the most difficult thing for him to understand.

“The Taliban are strange. They don’t interact with people as people. They have no respect or humanity. What is the problem with education [for women]? They don’t want women to be people, they want them to be animals.”

Before the Taliban came their two sons Karim and Saad were in school. Now all the schools are closed because of the Taliban.

“The state announced that they are open but of course no female students are going because they’re afraid.”

This story is part of a series profiling people from all walks of life who have descended on Lesbos during the refugee crisis, from refugees, migrants, aid workers, volunteers and locals.