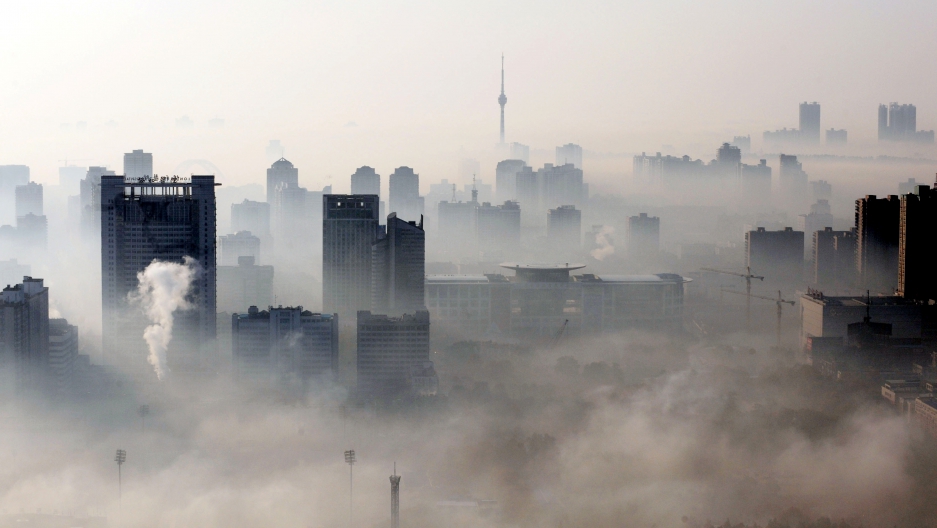 LIMA, Peru — After years of tortuous negotiations, a global treaty to halt climate change may, just may, be in sight.

World leaders and more than 40,000 delegates from 195 countries will descend on Paris for the United Nations climate summit from November 30 to December 11 with the aim of finalizing and then inking the historic deal.

But even with the mega-talks about to kick off, there remains a huge amount of work to be done to hammer out the nitty-gritty of who will cut their carbon emissions by how much, and who will pay for what.

Here are the key facts about the Paris negotiations and how they could decide the future of planet Earth.

What is the goal? Ice melts down the figure 'Two Degrees,' a target limit for human-made global warming, on the side of a carbon-neutral train departing for the COP21 Paris Climate Conference from Berlin, Germany on Nov 28, 2015.

The main aim in Paris will be an agreement to reduce each country’s carbon footprint so that average global temperatures rise no more than 2 degrees Celsius (3.6 degrees Fahrenheit) above pre-industrial levels.

The 2-degree target isn’t ideal, and meeting it doesn’t mean there won’t be more storms, floods, droughts, forest fires or other deadly extreme weather events. But it’s the smallest average rise many scientists and politicians think the world can realistically expect, given the geopolitical gridlock over measures to address climate change, and the fact that temperatures have already risen nearly 1 degree Celsius above pre-industrial levels.

Keeping climate rise below the 2-degree mark would at least avert truly catastrophic impacts, like much of Florida dipping below the Atlantic, or the Amazon rainforest turning into savannah.

Who will be there A slew of world leaders will descend on Paris for the start of the talks, including the leaders of the three nations with the largest carbon footprints: US President Barack Obama, Chinese President Xi Jinping, and Indian Prime Minister Narendra Modi.

That is a response to the failure of a previous climate summit, in Copenhagen in 2009. It was widely expected to produce the groundbreaking treaty. World leaders flew in at the end of the talks planning to sign a historic deal, only to find that the diplomats had failed to make the big decisions and necessary compromises.

This time, it’s hoped that the early appearances by Obama, Xi and Modi will mean the tough decisions get made swiftly, leaving the negotiating teams to dot the i's and cross the t's.

One outspoken world leader whose attendance remains unclear is the pope. Francis could hardly have staked out a stronger position on climate change, calling on governments to act urgently. He would have no formal role at the talks but, if he does decide to drop in on Paris, his moral influence on the assembled global leaders could be enormous. Protesters march for climate change on a highway in Manila on Nov. 28, 2015. Thousands turned out for climate change demonstrations in the Philippines and Australia, part of a weekend of action across the globe to demand results from the Paris summit.

Staying within the 2-degree limit will require renewed commitment from governments. In the run-up to the climate summit, countries were expected to submit voluntary national plans to curb greenhouse gas emissions. Known as INDCs (Intended Nationally Determined Contributions), the plans will provide a basis for the hardnosed talks in Paris, and not a little geopolitical grandstanding over who’s most responsible for ratcheting down projected emissions.

So far, 176 countries, from Togo to Argentina, have submitted their INDCs. Yet according to this analysis of the commitments, the world is still on course for a temperature rise of between 2.7 and 3.7 degrees Celsius.

That’s still a vast improvement on previous projections that saw the mercury rising by as much as a terrifying 10 degrees Celsius. Expect the Paris negotiators to pull a few all-nighters as they attempt to bridge that gap. A fire burns along a highway in a deforested section of the Amazon basin on Nov. 23, 2014 in Ze Doca, Brazil. Fires are often set by ranchers to clear shrubs and forest for grazing land, leading to heaving deforestation.

As you might expect of a global negotiation involving nearly 200 countries — with huge variations in wealth, culture and political systems, as well as the degree to which they are hurt by climate chaos — there are numerous sticking points. Expect major oil producers such as Saudi Arabia, Venezuela and Russia, whose entire economies hinge on the “black gold,” to quietly resist a strong treaty.

Unlike the Kyoto climate agreement of the 1990s, which compelled industrialized nations to curb emissions, the Paris deal will require all countries, rich and poor, to shrink their carbon footprints. Now there is an understanding that although Europe and North America might bear the lion’s share of the blame for past emissions, no solution will be effective unless it also sees developing nations, particularly giants China and India, bend down their emissions curves too.

But how, and by how much? Those questions could hardly be more complicated.

A country like Peru, with Amazon rainforest twice the size of California, will need to commit to stop deforestation, which releases the carbon stored in trees into the atmosphere. For a country like Poland, which continues to produce huge quantities of coal, the focus will need to be on moving to renewable energy and alternative exports. For India, it will revolve around using clean technology to grow the economy and lift hundreds of millions out of poverty.

The talks will not just focus on reducing emissions — “mitigation” in the negotiating jargon — but also on “adaptation” to the new climate reality. Many of the world’s worst-hit nations, from the Philippines to Belize, are also its poorest. Rich nations have promised a $100 billion-a-year adaptation fund starting in 2020 to help them cope with all kinds of impacts, from spreading tropical diseases to crop blight. But where that money is coming from, and whether it is investment or aid, remains murky.

Then there’s the huge question of whether the Paris protocol will be binding, something that China and India are particularly wary of. No one doubts that the summit will produce a face-saving written agreement which most participating governments will sign. But it remains to be seen whether that agreement will truly mark a breakthrough in the climate crisis, with strong obligations for participating nations rather than just more voluntary commitments. People rally for action on climate change in Melbourne on Nov. 27, 2015. From school children to the elderly, thousands demonstrated in the Australian city head of crunch talks in Paris designed to stop Earth from overheating.

The good news is that the politics of climate change appear to have changed, thanks both to the ever-mounting body of scientific research showing that global warming is real and caused by humans, and, of course, the constant flow of worrying climate-related news. Just in the last month, Mexico experienced the Western Hemisphere’s strongest-ever hurricane, and Yemen experienced an almost unprecedented cyclone in the Gulf of Aden.

That has allowed the world’s two largest carbon emitters, the US and China, to forge an unlikely climate alliance, and even saw the G7 group of rich nations pledge to rid their economies of all fossil fuels by the end of the century. Meanwhile, two of the leaders most opposed to acting on climate change, Canada’s Stephen Harper and Australia’s Tony Abbott, have both been replaced by politicians with very different stances.

And business and investors are no longer waiting for governments to take the lead. Just this week, Alianz, the world’s largest insurer, pulled all of its investments in coal.

Whisper it quietly, but the conditions may never have been more propitious for the strong climate treaty that scientists say the planet urgently needs.