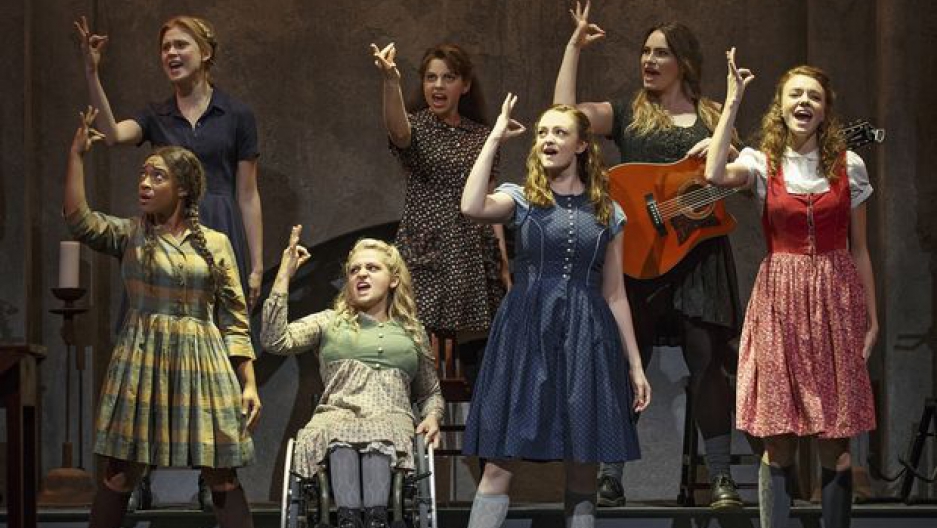 Picture this: You're in a theater, about to watch a Broadway show. The lights dim, the dialogue starts, and the words turn into songs. But this isn't your standard Broadway musical. You aren't just hearing the actors speak or listening to voices raised in song. You're also watching the words of deaf players translated into spoken English and American Sign Language.

You’re not just seeing the actors walk back and forth across the stage — you're gazing at a beautiful girl as she rolls through the story in a wheelchair. And you're witnessing the seamless interactions of these processes in an emotionally charged, inventively choreographed theater with a capital T.

This is what you'll experience when you see the Broadway revival of the Tony Award-winning play "Spring Awakening." The staging is based on the Deaf West Theatre production and will continue through January 9, 2016.

Durant is a deaf actor, and while he has a voice, he prefers to use an interpreter as he communicates in American Sign Language. He frequently uses his animated face and graceful, intense body motions to convey a world of ideas and emotions, something that brings a new level of drama to “Spring Awakening,” directed by Michael Arden.

“Historically within deaf theater, the voice actors were actually placed off-stage,” Durant says. “Instead, Michael brought all of our voice actors onstage to be viewed by the audience. So we’re doing things a little bit differently.”

“Three of them are deaf and the fourth was hearing,” Durant says. “The hearing individual actually makes sure that the translations are then on-rhythm and on-beat, but the three ASL Masters that are deaf prepare the translations. And also, they work with the hearing actors that do not know American Sign Language to make sure that their signs are clear and understandable by deaf audiences. So they also work as ASL coaches on the production.”

“Spring Awakening,” which was adapted from a German play of the same name, tells the story of sexually repressed European culture of the 1800s, complete with a rock and roll score. But in this new version, the show all comes together as a radical statement about the integration of disability culture within the mainstream.

“Of course, deaf culture is a part of our show, but I think it’s bigger than that — the story is bigger than that,” says Ali Stroker, a hearing and signing actress in “Spring Awakening.” She’s also the first wheelchair user to be featured in a Broadway. “I think it resonates with anybody who’s felt misunderstood, and ‘Spring Awakening’ — the story is so powerful that it can work in all these different ways without having to talk about somebody being deaf. You can just tell the story through this other lens.”

For many of these actors, it’s been a thrill to be in a blockbuster show that also makes a statement about the power of theatre.

“It was amazing to be in a room with people that have to translate in their own way, because that’s what I have to do any time I’m working on a production,” says Stoker. “I have to constantly translate movement and whatever is happening onstage to work for me in my situation because I do use a wheelchair. It was really cool—we were all just adapting through the entire process.”

In addition to using her hands to move around the stage, Stoker also had to use her hands to speak in sign language — something that comes together as a complex form of theatrical juggling.

While this Broadway venue showcases the power and talents of persons with disabilities, the play also highlights a taboo subject that is rarely talked about: Sexuality among the disabled.

“It’s a part of my life and a story that I have been dying to tell,” says Stoker. “I think that ‘Spring Awakening’ just really resonates for me and for probably a lot of young teenagers with disabilities. A feeling like, they’re not understood and that they’re not able to communicate their truth around sexuality. It’s an honor to be able to tell this story, and also for this part of our lives to be exposed on stage.”

Alex Boniello is the stage voice of Durant's character, singing and speaking Mortiz's lines in the show. Both Boniello and Durant had to work closely together to make their separate parts come together in a seamless and authentic way.

“I had never met a deaf person before,” says Boniello. “I had to very quickly learn how to aid Daniel in telling this story, and this character’s story. For me, that meant sitting down with him with a script, him showing me the signs for everything and me learning how to vocalize what a character’s feeling, and him and I meeting in the middle to decide what the best way to do certain things is — you know, working together. That also includes me giving him cues physically, so I’ll tap myself certain times so he knows what line of a song we’re on, things like that. It’s been a very strong team effort, especially with me and Daniel.”

That team effort has helped to not only make the show successful, but to reach new audiences in ways that other stage productions simply haven’t.

“We have a very diverse audience and that’s been wonderful to see,” says Durant. “Some fans have never seen American Sign Language before; never met a deaf person before. And the show inspires them to go home and learn some signs and come back to the show again and show off that they’ve learned a few things in American Sign Language. It’s such an honor to be in a production that has that kind of value.”