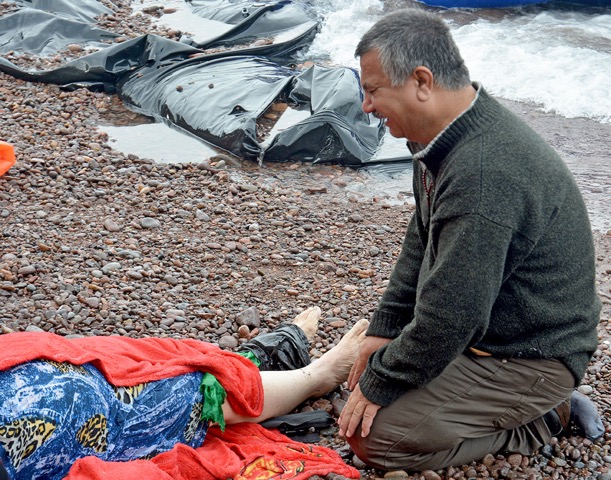 When the boat arrived on the Greek island of Lesbos, his wife was dead.

Some 100 refugees have died trying to make the treacherous crossing from Turkey to Lesbos, including more than 60 on one tragic night in October, when a trawler sank in high seas. The dangers are well known, but people keep coming. More than 725,000 refugees have arrived in Greece by sea this year alone — 425,000 of them at Lesbos.

After having spent two months on the island reporting on the refugee crisis, I can remember countless scenes of vulnerable people being rescued. Every single day, dozens of boats are launched and many of them flood, or the engines fail and they drift at sea.

Or they make it to shore, only to smash against the rocks. People end up floating in the water in fake life jackets holding tight to children and infants as body temperatures plummet. It’s a race against death as the Greek Coast Guard, Frontex, local fisherman and a network of NGOs and lifeguard groups and volunteers respond again and again, day and night.

If it weren’t for their heroic efforts, the death toll would be drastically higher than it is.

But some situations are so terrible that they transcend even the possibility of rescue. This was the case of an Iraqi man whose wife died at sea inside a dinghy, crammed full of 45 other refugees. When the boat reached the shore, people lifted out her dead body and placed it on the beach.

Alison Terry-Evans, a photographer and volunteer who helps greet the boats, was there and caught the moment when he bent down next to his wife in grief.

I wasn’t on the beach that day, but after Alison showed me the photograph, I interviewed several people about the incident. Apparently, the woman had a heart attack or some kind of seizure while still in the smuggler’s camp in Turkey.

The man wanted to take her to a doctor, but because she was still alive the smugglers forced her into the boat. She died en route, either from the heart attack or from drowning in the water at the bottom of the dinghy where she was shoved, with many people, including the couple’s two children, piled on top.

In order to confirm exactly what happened, I went to the Greek police, but the coroner’s report hadn’t been released yet.

I also tried to find the Iraqi man so I could interview him directly about his version of events, but the people at the refugee camp who were caring for him and his children said that for now he wasn't speaking to the press.

I could have gotten the official cause of death eventually, and perhaps spoken to the Iraqi man, but I didn’t have the heart to pry further into this tragedy and I set the piece aside.

But now that I have left Lesbos, I find myself looking at this photograph and thinking about what this family suffered. Because the world’s leaders have failed to establish a rational process for people like this Iraqi man to apply for asylum, almost one million people have had to resort to paying smugglers for transportation in a “death boat,” as one refugee I interviewed referred to the dinghies, in order to find safe haven in Europe.

It’s quite obvious that the smugglers do not care about the well being of their human cargo.

As has been well-documented, the boats and the engines and the lifejackets are all substandard. The smugglers carry weapons and force people into boats that are overcrowded and launched even in very bad weather in order to maximize profits, which run into the billions.

Not even a wife’s heart attack is justification for a refugee who has already paid $1,200 each for his family of four to be able cancel the trip and seek medical assistance.

It’s not surprising, really, that the human traffickers are heartless. But I would like to hope that Western democracies could do better.