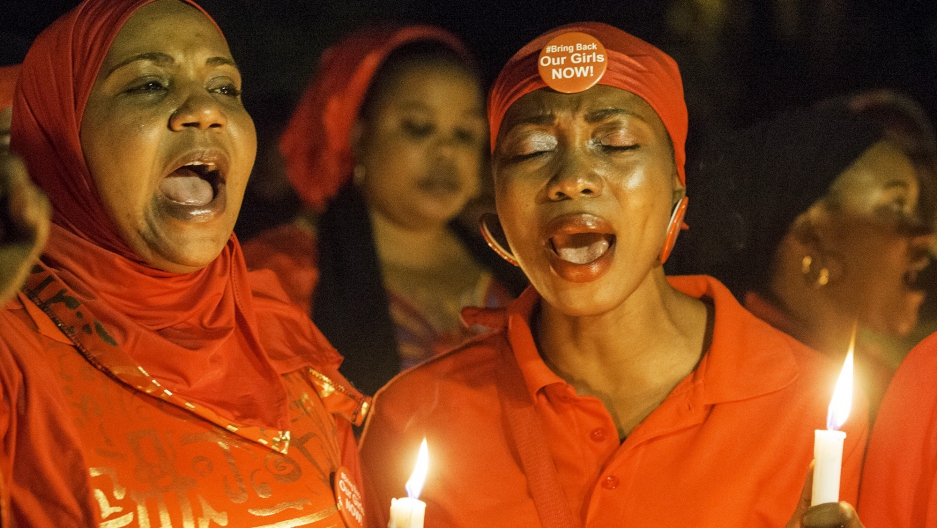 Nigerians held vigils for the girls kidnapped by the extremist group Boko Haram on the one year anniversary of their abduction, April 14, 2015.

Nigerians caught up in Boko Haram violence in recent weeks have been able to use Facebook to quickly alert their friends and relatives by using the "safety check" feature.

But not every Nigerian is wowed.

In the past, Facebook used safety check primarily during natural disasters.

But that changed on Nov. 13, when Facebook switched on the feature after the Paris terrorist attacks. Many Parisians were quick to use the tool. But others around the world asked why safety check hadn't been activated earlier, for instance during the double suicide bombings in Beirut the day before.

Facebook took the criticism and activated the feature last week in Nigeria, after Boko Haram violence in the northeastern city of Yola killed at least 32 people.

Nwaubani applauds that Facebook decision as a small step forward. But she'd prefer Nigerians everywhere take a bigger step, and acknowledge Boko Haram's victims, even if those victims they don't live in Nigeria's most populated cities.

"You don't get the sense from reading in the Nigerian newspaper that there are bombings taking place in our country every day" she says. "No newspapers publish the names of these people who are killed."

Nwaubani says Nigerians could learn from the way Parisians are dealing with extremist violence in the French capital.

"At least when ... the Paris thing happened, the president addressed the media, everybody is shocked, we see the faces of people who were killed, we get to know about their lives," she notes. "But I don't know the names of people in Yola, I just hear the numbers."

Nwaubani admits the Facebook decision might be a show of respect for Nigeria. But she wonders if the social media platform will now activate its safety check with regularity.

"Are they going to do it when there's another one tomorrow and the next day? These are the sorts of victories that some Nigerians and Africans have come to enjoy. You know, you bully the West into doing something and you consider it a victory," she says. "I understand that when you live in New York and you're Nigerian, it's important for you when you go to work the next day that all your collegues know that Facebook respected your country."

Instead Nwaubani is calling on Nigeria's media to give more attention to Boko Haram violence, and its victims.

"Tell us who these people were. Tell us what their lives were like.  Let us know that they were human beings," she says. "Something as little as that could make all the difference."