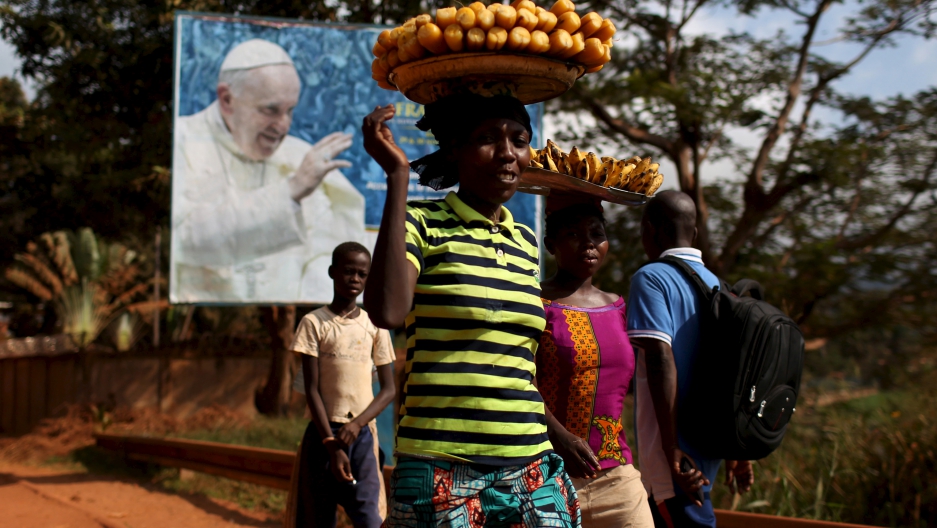 Women carrying fruits and vegetables on their heads walk past a billboard with a photograph of Pope Francis, in Bangui, Central African Republic; November 26, 2015.

Pope Francis is scheduled to wrap up a six-day, three-nation pilgrimage to Africa this weekend with a visit to the war-torn Central African Republic.

The 78-year-old leader of the Catholic Church was asked about concerns for his own safety on a trip that brought him first to Kenya and then to Uganda and he joked he was, “more worried about the mosquitoes,” according to AFP.

But the security situation in CAR is no joke.

Violence between rival Christian and Muslim militias that began in 2013 has led to the deaths of thousands of people and displaced more that 800,000. Much of the countryside is still controlled by the militias.

Even the capital of Bangui, where Francis is planning to meet with local religious leaders and celebrate Mass, is a dangerous place.

“This was not originally a religious conflict,” says the BBC’s Tim Whewell, who reported from CAR last year. He described the situation as, “ethnic and religious cleansing on a massive scale.”

Whewell says the violence started two years ago, when a mainly Muslim militia from the north of the country called the Seleka fought its way toward the capital. “It committed really terrible atrocities against the people it found along the way. Most of those people [were] Christian,” Whewell says.

Out of that wave of violence grew the mainly Christian militias known as the anti-balaka, who in turn have committed atrocities against Muslims. Whewell says Catholic priests sheltered Muslim civilians in churches during the worst of the killing and that some remain in hiding in those churches today.

In Bangui, Pope Francis is expected to meet with the Islamic leader of a besieged community of Muslims who are under the protection of peacekeeping troops. This is the last remaining group of Muslims in the capital, after the rest fled for their lives.

Without a doubt, Francis will be guarded by a large contingent of security forces during his visit to CAR.

“Even so, to be going into a besieged [Muslim] enclave. It’s quite a step for a pope,” Whewell says.