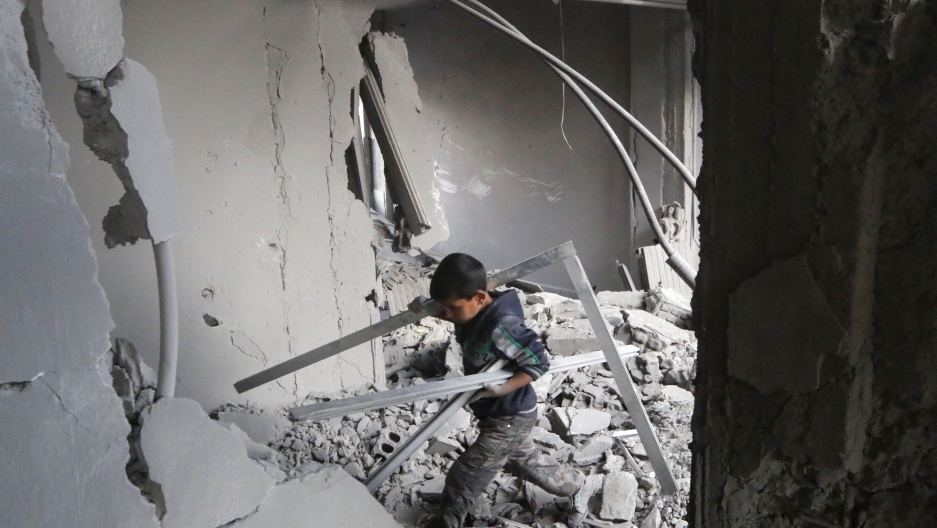 A boy collects items from among the debris of a school for the deaf and mute, destroyed in what activists said were overnight U.S.-led air strikes against the Islamic State, in Raqqa November 24, 2014.

A watchdog website, Airwars.org, has been counting up the number of civilians killed in Syria and Iraq in air strikes by the US-led coalition. Now that Russia has begun its own air campaign in the region, the group sees an alarming rise in civilian deaths, primarily from Russian air strikes.

In August 2014 the United States, at Iraq’s invitation, launched an air campaign against Islamic State, or Daesh. The next month the US launched operations against Daesh targets in neighboring Syria.

Since then, the US has conducted more than 6,000 air strikes on targets in Iraq and Syria (other Coalition members have launched nearly 2,000 more). This November the US Department of Defense announced that the US and its allies have flown an estimated 57,301 sorties.

But after some 8,000 air strikes dropping nearly 30,000 bombs and missiles, the US Central Command has acknowledged just two civilian deaths from Coalition strikes in Syria and four civilian deaths in Iraq.

"Our own estimates are, unfortunately, far far higher," says Chris Woods, editor of Airwars.org. The UK-based investigative website uses on-the-ground reports, social media and press accounts to stitch together a picture of the battles in Iraq and Syria. The project is supported by the Joseph Rowntree Charitable Trust, a Quaker organization which focuses on issues of conflict and injustice.

"We have identified more than 260 alleged events in which the Coalition has killed civilians," says Woods. “We think around 110 of those are fairly reported, with a combined civilian death toll of somewhere upwards of 680 civilians killed.”

We asked CENTCOM to explain the gap.

Defense Department spokesman Major James Brindle, commenting via email, says, "US and other Coalition forces work very hard to be precise in airstrikes. US and Coalition forces take all reasonable measures during the target planning and execution of airstrikes to mitigate risks to non-combatants, and to comply with the Law of Armed Conflict."

Chris Woods agrees that the US-led Coalition tries to keep civilian deaths to a minimum. "Air power historically has been the worst cause in modern war of civilian deaths, and we are seeing the benefits of, for example, precision strikes and great care being taken in targeting."

Airwars.org even republished the US Department of Defense figure of 20,000 Islamic State fighters killed in Operation Inherent Resolve. By that measure, with fewer than 10 military fatalities on the Coalition side, the US-led war against the Islamic State appears to be very successful.

And now with Russia flying air strikes in Syria, Woods is concerned about a sudden rise in civilian deaths.

"Our researchers have simply been overwhelmed by the volume of reports. There have been more than 110 claimed events alleging civilian fatalities from Russian air strikes just to October 30th," he says, "and the fatality range from those Russian strikes ... could run as high as 780."

That number may be overstated, Woods admits, not least because the entire Syrian air force is comprised of Russian-made aircraft. "What's often described as a Russian strike is simply a Russian-made plane," observes Woods.

But even adjusting for that, Woods estimates 250-375 civilians were killed by Russian air strikes in just one month. "That is a very worrying toll."

"Many of those civilians are being killed in mass casualty events. That's 30-40 civilians killed at a time. And we're also seeing very high numbers of injuries as well. I think that is an indication of the kind of munitions that the Russians are using and also where Russia is bombing."

And the damage often comes after the fighter jets leave. One strike reported over the weekend left 50,000 Syrians without access to drinking water.

As for the Coalition campaign, the Department of Defense says it’s not done counting civilian deaths. "Six non-combatant casualty allegations are currently being investigated," writes Major Brindle, "and the credibility of six allegations is currently being assessed... It is important to note," he adds, "that the current environment in Syria and Iraq makes investigating these allegations extremely challenging."

Brindle says that while the DOD continues to review all allegations carefully and considers new information when it is provided, "as a result of limited access to many of the contested areas in Iraq and Syria where civilian casualties are reported as the result of Coalition strikes, USCENTCOM is unable to investigate each credible report."

Airwars.org, using its own sources and methods, will continue to investigate claims of civilian casualties from airstrikes by the US, its Coalition allies, and now the Russian air force.