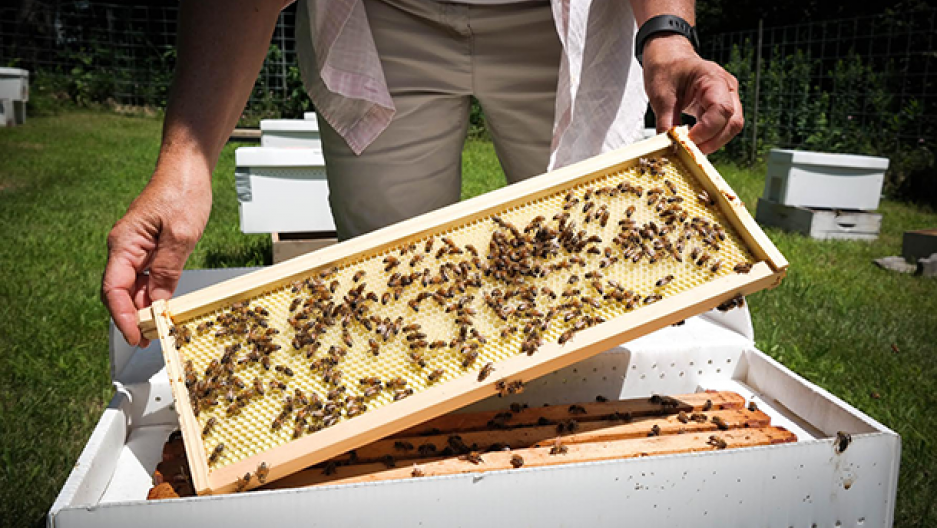 Maryann Frazier, a researcher at Penn State's Center for Pollinator Research, checks on one of her experimental honeybee hives. Frazier says the Varroa mite poses one of the greatest dangers to honeybee populations.

According to bee researcher Maryann Frazier, the Varroa mite, a parasitic mite that feeds on the blood of adult bees and on the brood, is the main thing that’s been wiping out honeybees since the 1990s.

Treatments for the Varroa mite have been, and still are, very limited. One of them involves spraying bees — which are, of course, insects — with insecticides, in the hope that the chemicals will kill the mites, but not the bees. The approach has worked well enough to give some colonies at least a fighting chance.

But out on a farm in western Pennsylvania, beekeepers and researchers are trying something new. Commercial bee breeder Jeff Berta is part of a co-op of about one hundred beekeepers, stretching from Michigan to Tennessee, that is working to breed a honeybee that can better resist the destructive Varroa mite.

Berta’s ‘queen bee Number 18’ is part of this experiment. The bee’s mother is from a Vermont bee colony that survived disease and cold winters. Berta had her artificially inseminated by Purdue University scientists who had developed bees with natural resistance to mites.

“These bees will bite the legs and chew on the mite,” Berta says. “If they bite a leg off of the mite, the mite will bleed to death. So the bees are actually fighting back. That’s the type of genetic line that we’re after right now.”

With every egg Berta’s Number 18 queen lays, she passes on those leg-biting behaviors — building a colony that can rid itself of mites naturally, with no help from pesticides. It’s a huge breakthrough.

But the breeding project can’t end there. Jeff Berta can’t artificially inseminate every queen; so any descendants of Number 18 that turn into queens themselves will likely just fly off and mate with ordinary drones within a few miles. Meaning, if Berta’s beekeeping neighbors don’t have strong bees too, they can easily dilute his carefully selected lines.

Bee geneticist Christina Grozinger says you have to be in it for the long haul. “You can’t produce a stock and say, ‘Now I’m done. Now we can just sell it everywhere,’” she explains. “You have to constantly reselect and constantly include other beekeepers who are interested in working as part of this effort.”

That’s why Jeff Berta and the co-op of beekeepers happily give eggs away from their best colonies to neighbors, and swap queen bees to try out new genetics. It’s all part of shifting the paradigm from a system where beekeepers simply buy new bees every year, to builidng a lasting neighborhood of bees that can slowly create real survivors.

This article is based on a report by Lou Blouin of Pennsyvania Public Radio's Allegheny Front. Blouin's report aired on PRI's Living on Earth with Steve Curwood