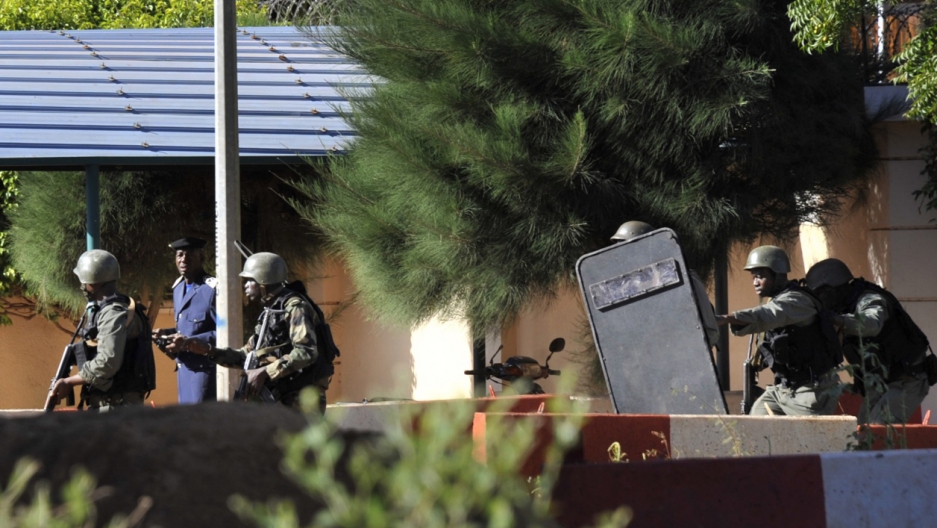 Malian troops take position outside the Radisson Blu hotel in Bamako on Nov. 20, 2015. Gunmen went on a shooting rampage at the luxury hotel in Mali's capital Bamako, seizing 170 guests and staff in an ongoing hostage-taking that has left at least three people dead.
Share

JOHANNESBURG, South Africa — Less than three years ago, French troops put the militants on the defensive, pushing back Islamist fighters who had taken control of Mali's northern half in mere months.

But in the past year, as the French military wound down its campaign, the threat has re-emerged — and again crept southward into towns and cities that were once considered relatively stable and secure, now finally arriving even in the capital, Bamako.

Security analysts say the Radisson attack was similar in style and weaponry to the August siege of a hotel in Sévaré, central Mali, a town which was also viewed as secure. In that attack, 17 people were killed, five of them working for the UN’s mission in the country. A French army officer stand guard on January 16, 2013 while the Malian president welcomes service at the military airbase in Bamako.

Ibrahim Maïga, a researcher for the Institute for Security Studies, wrote in September that fresh attacks in central and southern Mali “point to a deteriorating security situation in the country.”

“The recent attacks should be a wake-up call for Malian authorities,” Maïga wrote. “Furthermore, it is an opportunity for in-depth reflection and analysis of the factors behind the emergence and spread of terrorist attacks in areas that were previously spared.”

In early 2012, Islamists hijacked a rebellion by Tuareg separatists in Mali after President Amadou Toure was overthrown in a coup. French troops intervened in early 2013 and pushed back the Islamists over the year that followed, liberating northern towns including the ancient city of Timbuktu.

But while the French intervention was widely praised at the time, the militant groups have quickly returned in new forms.

An Al Qaeda-linked group called Al Mourabitoun, led by the infamous one-eyed Algerian militant Mokhtar Belmokhtar, has claimed responsibility for the Radisson Blu attack. Two other Islamist groups have also claimed to be behind the siege of the hotel.

Despite the fierce fighting in northern Mali over the past few years, the capital had remained a relatively stable hub for foreign business interests in a country rich with mineral resources.

When gunmen attacked the hotel, "they struck at the heart of West Africa’s engagement with the rest of the world," Joe Penney, co-founder of West African news site Sahelien.com, writes in a New York Times opinion piece.

The victims of the attack — Chinese railway executives, employees of a Russian freight airline company, an American development consultant, among others — "represent a snapshot of who has stakes in the region’s fight against terrorism," Penney writes.