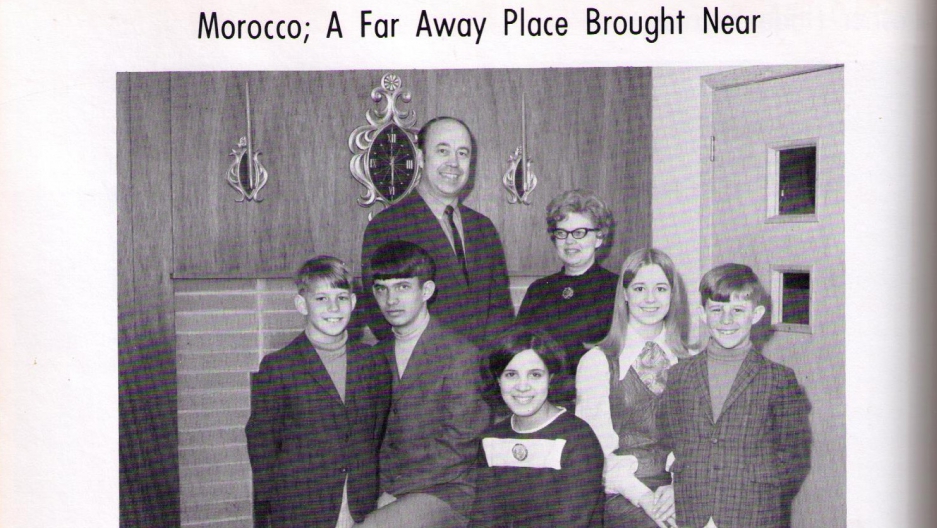 A photo from the yearbook:  My mother, Khadija Ouannane and the Davises, her American family in Bloomer, Wisconsin. The youngest brother couldn't say her name, so they all called her Katy.

In the summer of 1969, Khadija Ouannane, a 16-year-old girl from Casablanca, Morocco stepped off an airplane in Eau Claire, Wisconsin, and into the arms of the people she would come to call family.

Khadija — known as Katy by her American friends — spent a year as an exchange student with the Davis family in Bloomer, Wisconsin, — population 3,000, about 25 miles north of Eau Claire. She was embraced by this extraordinarily loving family. The teenage Laurie Davis and Khadija shared a bedroom and many adventures. Khadija says her experience in Bloomer was transformative, making her a strong advocate for democracy, critical thinking and free speech.

I know this because Khadija Ouannane is my mother. I grew up in Morocco, hearing about her beloved American family. Over three decades, there were letters, phone calls and long journeys from Morocco to visit the Davis family in Bloomer. My older brother and sister, Mehdi and Abla, went there in 1978 with my parents, my uncle, aunt and my cousins. I wasn’t born yet. My brother Mehdi spent a summer with the Davis family, learning English.

And then, in 2003, the US invaded Iraq. From her home in Morocco, my mother sent emails to all of her friends, including Laurie Davis, urging them to oppose the Bush administration’s policies and to sign petitions against the invasion. Laurie's response was terse: We don't want to hear your talk against the war. Stop sending these emails.

My mom complied. Though her heart was broken, she cut off contact with her American family.

And that was it for more than a decade.

In May 2014, I traveled to the US for work; I’m a journalist, covering North Africa, the Middle East and Paris. I never completely understood what happened between my mother and Laurie Davis, so I decided I would travel to Bloomer to find her and find out what went wrong. I feared the worst — that world events and my mother's opposition to the war had turned this American family against my mother, and maybe against all Muslims.

After so many years of hearing about Bloomer — this iconic American town — I felt as if I’d already been there. My mother remembered the address of the Davis' house on the lake and when I asked the neighbors about the Davis family (who no longer lived there), they sent me to a local nursing home where I met Laurie’s elderly father, Gerry. He told me where to find his daughter, who was living nearby.

Meeting Laurie Davis was extremely emotional for me. We were both happy to finally meet each other. She called her younger brother Tom, who was my mother’s favorite, and I got to meet him and his wife and son. Everything was so warm and cordial. Wonderful, but in some way it didn't make sense. I kept waiting for an explanation about the break between Laurie and my mother. After hours of talking and reminiscing, Laurie finally offered her account of what had happened between two women from such different backgrounds but who had considered themselves sisters.

At the time, Laurie told me she supported the invasion of Iraq, and had friends with sons and daughters in the military and on the ground there. I could understand this explanation, but I was surprised by the other reason she gave for pushing my mother out of her life. Laurie says she was afraid she might get in trouble with US authorities for communicating with a Moroccan who was so adamantly against the war. As Laurie talked, I was reminded of President George W. Bush’s declaration: “Either you are with us or you are with the terrorists.”

During our conversation, Laurie Davis told me she was full of remorse and that her feelings have changed. She says she realizes US policies have created enormous chaos in the Middle East. And she is horrified to know that her fears of getting in trouble were not entirely unfounded — that her own government actually was conducting surveillance on many Americans.

My mother was also surprised and shocked that an American could be scared of her own government. Both Laurie and my mom were devastated that these world events could have created such misunderstandings between even the closest of people.

I am really happy that I made the trip to Bloomer and was able to put them back in touch. Now, they are in touch on Facebook and it looks like the two sisters are back to the place where they were before the Iraq war.

This story was produced in collaboration with Round Earth Media, www.RoundEarthMedia.org.