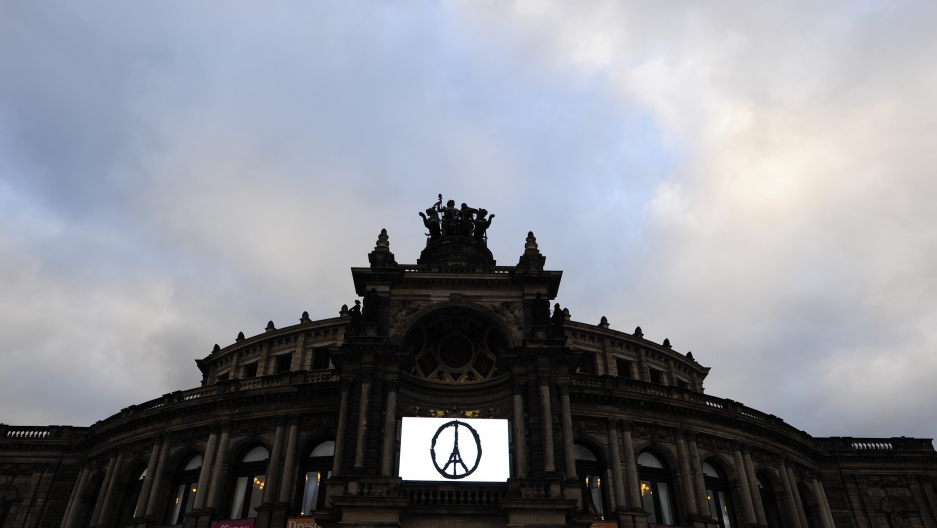 The 'Peace for Paris' Eiffel Tower logo is displayed at the Semperoper opera house in Dresden, eastern Germany, on Nov. 16, 2015, to pay tribute to victims of the attacks in Paris claimed by the Islamic State.
Credit: ROBERT MICHAEL
Share

Government sources in Berlin have told several news agencies that Germany will help France in the skies over war-torn Syria by deploying reconnaissance jets, refueling French bombers and sharing intelligence.

The defense spokesman for the Christian Democratic Union, the country’s largest party, confirmed Germany was moving above and beyond its current support for Kurdish Peshmerga fighters in Iraq, marking the country’s most serious commitment yet to the fight against the Islamic State (IS).

That doesn’t mean Berlin will start bombing the terrorist group. But it does signal growing reception among Western leaders of French President François Hollande’s calls for a “grand coalition” in Syria.

“When the French president asks me to think about what more we can do, then it is our duty to reflect on this,” Chancellor Angela Merkel said in Paris on Wednesday, “and we will also react very quickly here.”

Hollande was in Moscow on Thursday hoping to convince Russian President Vladimir Putin to join the French effort rather than going it alone — in spite of Turkey’s controversial downing of a Russian jet earlier in the week. The televised remarks were awkward, but Putin did say Moscow was ready to unite with Paris against a "mutual enemy."

"Our common enemy is terrorism and it has a name, Islamic State," Hollande told Putin, according to Reuters.

Many observers in Germany agree Berlin should step up its role in the fight against IS.

“Whoever wants to fight the source of terror and migration, threats to its own people, and demonstrate itself as a reliable partner must back up their words with deeds,” wrote Klaus-Dieter Frankenberger, foreign editor of Frankfurter Allgemeine, one of Germany’s most influential newspapers.

But not everyone is happy about their country’s new commitment in Syria.

Criticism came from the largest opposition party, The Left, which claimed the move would boost the risk for terrorist attacks at home. With last week’s evacuation of an entire soccer stadium in Hanover because of a bomb threat, that possibility is not so far-fetched.

Still, Germany’s decision is part of a broader show of support in the wake of this month’s attacks in Paris, which killed at least 130 people and sparked a new round of airstrikes against the Islamic State.

It’s unclear how “grand” Hollande’s coalition will end up.

While he’s received positive signals in Europe — as well as continued support from the United States — some warn his tough talk may unnerve allies.

“There is plenty of goodwill towards France across Europe right now, in part because of a chilling understanding that the massacre in Paris could have happened anywhere,” the Economist wrote Thursday. “Yet no other European leader is using the word ‘war.’”