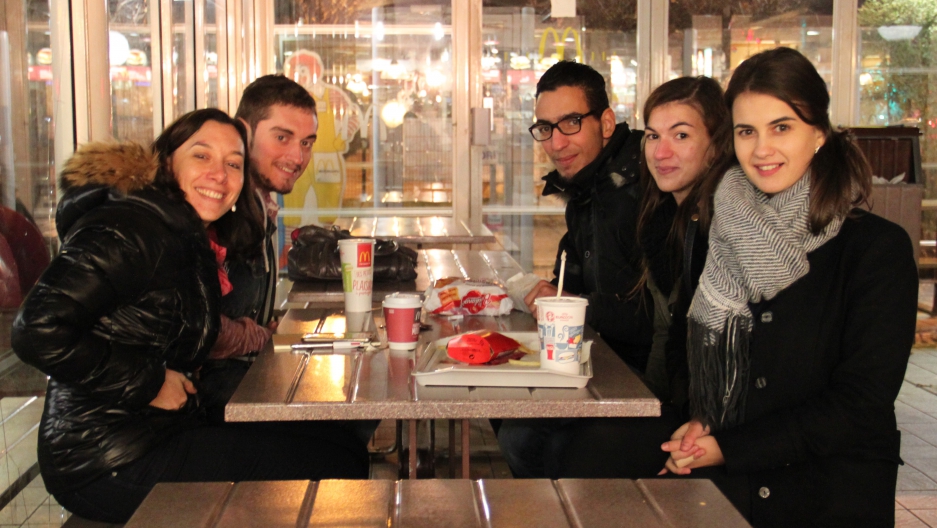 From left, Angeline Rochery and former students, Steven dos Santos, Samir Saïfi, Laeticia Rodrigues and Cristina Riscou meet at McDonald's — one of the few places open on a Sunday night in the Paris suburb of Épinay-sur-Seine.

There's been a lot of coverage of the Belgian connections for the attackers in Paris. But some of the perpetrators were young French nationals from the poor, crime-ridden, immigrant suburbs outside of Paris.

So this past weekend, I joined a middle school teacher on a trip to a Paris suburb to see the recent attacks through the eyes of kids who belong to the same generation, and live in the same suburban area as some of the attackers.

My guide, Angeline Rochery, and I boarded a train to Épinay-sur-Seine. It’s only nine minutes by train to get to this Paris suburb, but it’s worlds away.

“I wouldn’t dream about buying a flat there. It’s not safe,” Rochery said.

She used to teach Spanish at a middle school in the suburb, and she asked some of her former students to meet us on a Sunday evening. It’s a time when Parisians pack cafés, though in the suburbs, it’s different.

“All the kids we are going to see tonight told me the same thing. Like, nothing is open on Sundays. You have absolutely nothing,” Rochery said. “It’s a city of 50,000 people. It’s not a village. You don’t have a café, no restaurant open, nothing to do for kids. It’s a really young population and there’s nothing to do.”

We meet at the one place in Épinay the kids say is open on a Sunday evening: McDonald's.

They’re happy to see Madame Rochery as they used to call her in Spanish class. That was five years ago; now they’re about 21.

They usually go out to the neighboring suburb of St. Denis, to the main street, to get some food or go shopping. They don’t venture there now, ever since a police shootout with suspects, including the organizer of the attacks who was hiding in an apartment on the same street.

The type of kid from the suburbs who embraces radical Islam is familiar to them.

Rodrigues’ boyfriend, Steven dos Santos, said he used to be Facebook friends with a guy from the neighborhood who constantly expressed his views.

“He was always on Facebook saying things about…the problems between Israel and Palestine, for example,” Dos Santos said. “He was fond of weapons. He had black humor, very strange. Really racist. Against gays, homophobic too. Hating everything that was not Islam.”

When the guy posted his support for the Charlie Hebdo attack in January, Dos Santos unfriended him on Facebook.

What leads a kid to think such things? Dos Santos said it was a weakness of spirit, but also the place where he grew up.

Another guy he knows failed in his studies, so he turned to religion, Dos Santos said.

“He got the people around him to see his way of Islam, too,” he said. “He was a bad influence on people. This guy was connected to drug dealers and weapons sellers who I knew. So this is an example of something that could blow up in an unexpected way.”

The kids at this McDonald's turned out differently. Dos Santos is working in construction; his girlfriend is studying to be a Spanish teacher.

Another kid at the table, Samir Saïfi, was born in France but is of Algerian descent. He can’t find a job, so he’s planning to move to Canada, where he thinks he’ll have more opportunities.

“I have applied for jobs in big companies. Like the national railway in Paris. And I didn’t get the job. I had all the skills and diplomas that were required. And the guy who came just afterwards, he was white — sorry to be racist — he got the job,” Saïfi said.

“It’s always going to be harder because of my name, but it’s always possible. I have to find my way but there is something for me.”

Not everyone has the strength of spirit that Samir has.

“There’s a vicious circle here,” Dos Santos explained. “It’s true, the fault of one Arab falls on fault of other Arabs, so a person like Samir looking for job because of his Arab name is not going to find one. So the guy who is not going to find a job needs to make money, and he will fall into delinquency, into felonies to find money, and then he is going to give a bad image again.”

I spoke with a French official, on condition of anonymity, who has worked on antiterrorism cases involving young, French-born jihadis who join ISIS. He said the common denominator among the youth is that they feel alienated from French society; they think French people look down on them. They hate France.

This attitude bothers Cristina Riscou, whom Rochery taught when she was a new immigrant from Romania.

“I can’t understand how people can say they don’t feel French, or feel rejected by France. I was not born here. I come from Romania,” she said, beginning to cry.

“I arrived here just 10 years ago. I came to France and I felt so welcome,” she continued. “France did everything for me to feel at home. I don’t want to talk about where I come from. I feel like I am from here. I belong here.”

Still, on her CV, she lists a Paris address, not her suburb address.

Because even if she feels she belongs, some in France might not agree.