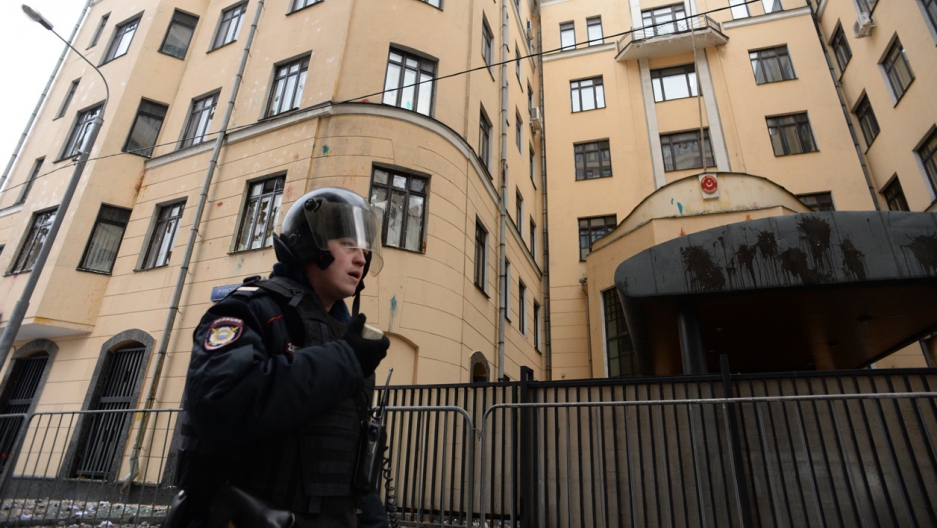 A police officer patrols outside the Turkish embassy in Moscow on Nov. 25, 2015, after an anti-Turkey protest.
Share

The fallout over Turkey’s decision to shoot down a Russian warplane continues to worsen. Turkey is part of NATO and called on NATO for support after the incident. This made Russia really angry. Now everyone’s comparing all the diplomatic posturing to the Cold War.

Comparisons to the Cold War have been cropping up a lot over the last few years. That’s because Russia has reasserted itself on the world stage in big ways. And whenever Russia tries to flex its old superpower status, the Cold War analogies come back.

They came back with a vengeance when in 2014 Russia annexed Crimea, a southern resort town that belongs to Ukraine on most current world maps. The comparisons continued when Russia began meddling in eastern Ukraine, supporting pro-Russia separatists there. There were rounds of sanctions and a global standoff that broke down along lines that looked very similar to those of the Cold War.

Even Nordic militaries were moved to choreograph their collective power during training exercises earlier this year. Those culminated in a very Cold War-ish storming of a beach that was a mere 100 kilometers from the Russian enclave of Kalingrad. Russia, of course, responded to this. NATO jets in Estonia had to scramble five times during the exercise to ward off incoming Russian aircraft.

That all just seems like good fun now. Russia and Turkey are at a real impasse. And while no one wants a war to break out between a NATO country and Russia, it sometimes seems like it’s too late. Russia and Turkey are theoretical allies in the war against the Islamic State. But in the Syrian conflict they are on opposite sides. Russia supports the Syrian president while Turkey supports the rebels. So it is not surprising that there are tensions in the skies above, where both countries have been dropping bombs.

The question is whether this incident will derail progress made among diplomats in Vienna earlier this month. In those talks, which included both Russia and Turkey, an ambitious plan was agreed upon that could lead to free elections in Syria within 18 months. That’s looking pretty unlikely right now.

Russian President Vladimir Putin really freaked out over Turkey's swipe at Russia, and the state media apparatus followed his lead. Putin immediately accused Turkey of stabbing Russia in the back and colluding with terrorists. They were strong words from a world leader.

Rumors quickly spread that the two aviators shot down with the plane were killed after they ejected. Turkey scrambled to disprove that story. In the end everyone was half right and half wrong. Rebels on the ground killed the pilot. The navigator was rescued.

A major Russian newspaper led its front page with calls to sever relations with Ankara. Russian tour agencies canceled trips to Turkey and the government tourism agency warned people against traveling there.

Now everyone is waiting to see how Russia’s military will respond. It’s tricky to retaliate without making things worse. Russia could bomb Turkish-backed elements in Syria. Whatever happens, analysts contend that neither Russia nor anyone else will let this go too far.

“Russia cannot fight hot diplomatic wars on too many fronts, and Europe clearly wants Moscow to be part of the solution in Syria and maybe Ukraine, too,” one said.

A local competitor has outmaneuvered Uber in Chennai, India.

The area has received unusually high monsoon rainfall in the last few weeks, causing fast-rising floods. (It seems like all weather is unusual these days). It’s been a tragedy. Some 169 people have been killed and the floodwaters have caused $1.3 billion in damages.

In Chennai, roads are totally submerged. The city evacuated 12,000 people, but many more were stranded. The roads we impassable. Enter Olacabs, a homegrown Uber rival. The company hired professional rowers and sent out boats to pick people up and deliver food and water to stranded residents.

The whole thing turned into a big joke online. You can follow it here.