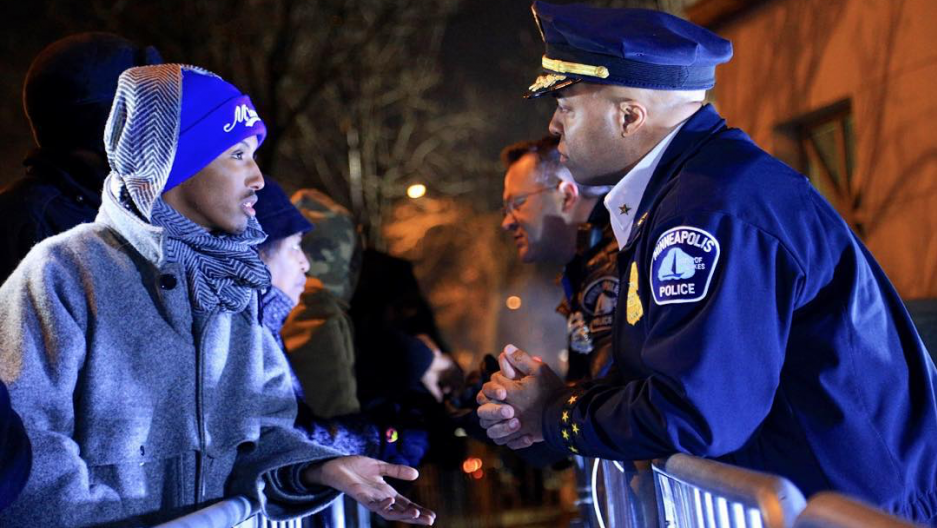 Mohamed Samatar, 23, speaks to a police officer at a Black Lives Matter protest in Minneapolis. He wrote on his Instagram account: "What am I supposed to do when you rage war against the lives you're supposed to protect and serve?"

Mohamed Samatar, a 23-year-old artist and activist in Minneapolis, has decided it's time to take a break. On Monday night, a group of white men shot into a crowd of Black Lives Matter protesters, wounding five people. Protesters are calling it a hate crime; police and prosecutors not yet said whether they agree.

"When you're going to a peaceful protest and there's a chance of someone coming in with a gun and shooting you down, that is fear," he says. "As a person who never dealt with war, it hits you hard. You wake up and you're like, because of the color of my skin today, I have to be in fear."

Black Lives Matter protests in the Twin Cities have escalated since a police officer killed an unarmed 21-year-old man, Jamar Clark, on Nov. 15. Protesters have taken over the block in front of the Fourth Precinct police station, just blocks from where the shooting occurred in north Minneapolis. They have not backed down, even after the Monday attack. Today, Clark's funeral procession paused at the precinct.

For Samatar's part, he's having a hard time processing that this attack could happen here, outside a police station with officers everywhere. He can't understand why it took a day to apprehend suspects.

"If you imagine three black men or three Muslim men stormed a football game, there would be a very different response," he says.

That's part of the reason he is headed out of town for a few days. But he's also just looking for a reprieve. He's a performance artist — he uses dance, photography and sound to tell stories — and he works at the Cedar Cultural Center, a venue that brings music from around the world to the Twin Cities.

"If you're in a situation where there's a lot of violence happening, it's hard to think creatively," he says. "My way of healing is leaving the geographical area — as my mom would put it, getting new fresh air."

Samatar grew up in Minneapolis but his parents are from Somalia. There are more than 20,000 Somali immigrants in Minnesota, according to the most recent census. His family has a strong sense of its Muslim identity. "Since 9/11, that's been something in our consciousness and how we moved in the world," he says. "Race was something that was secondary, growing up."

It has taken time for many Somali immigrants in the Twin Cities to know about and understand the Black Lives Matter movement. Many Somali immigrants do not have access to information about the violence or injustices happening in their cities. And they haven't learned about the Civil Rights era, Samatar explains. Telling someone who just came from a refugee camp, who does not yet understand what it means to be a black person in America that they should align themselves with Black Lives Matter is a difficult thing to do.

"It's hard to put those expectations on someone," Samatar says.

Still, Samatar says for the most part, the Somali community stands with Black Lives Matter. "Growing up, civil rights was detached from my identity," says Samatar. Black Lives Matter has given him a chance to be open, to "let out these cries that I'm living in. It's hard being a young, black Muslim person in America today."

"We had an act of terrorism happen in a place I grew up in, I call home," he says. "But the hopeful thing throughout all this is that there's such an outstanding response of Minneapolis and our organizing community here. Using healing and love and music and art as a means to deal with these atrocities. And that's very much why I love Minneapolis and why this is so different from any other movement that has started here. There's a sense that this is real and we are here together. And justice will come. That's what we hope for."