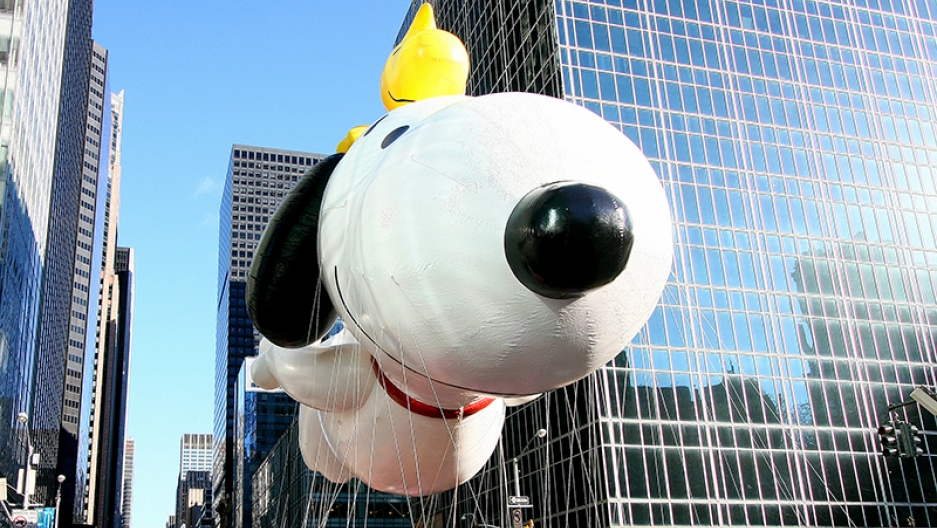 In 1927, a giant inflatable Felix the Cat lifted off the ground (just barely; he was filled with air, not helium) in the Macy's Thanksgiving Day Parade, and cartoon character balloons have been a holiday tradition ever since. 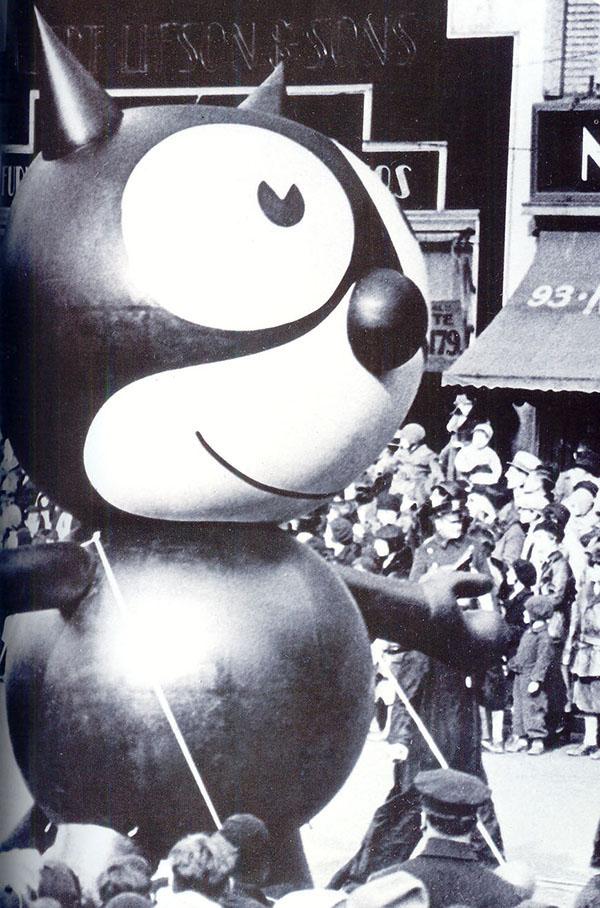 Mickey Mouse, Kermit the Frog, and Supermanhave wound their way down the parade route. Snoopy will make his 39th appearance this year. Macy's is guarded about their selection process, saying only that parade organizers "are always on the lookout for what is popular with kids, teens and adults. The new balloons in the line up reflect that. Each has pop culture relevance."

What we do know is that the balloons are designed and made here in the US, at a dedicated studio in New Jersey. Each balloonis as tall as a three- to five-story building and requires 90 handlers. They are made of polyurethane and contain several chambers to facilitate inflation. Each balloon starts with a pencil sketch that must be vetted by aerodynamic and engineering consultants before a scale model in clay and a painted replica are made ---that's before any fabric for the actual balloon is cut. The process from design to realization can take a year.

So what happens to the balloons after they have made their run? In the early days, the balloons were released and eventually burst. In 1929, designers came back with an interesting plan: give the balloons safety valves so they can float for a few days while the helium is released, and sew tags onto them encouraging finders to return the balloons to Macy's for a reward. Of the five balloons released, one was lost to the sea, another to the East River, and three made it out to Long Island, where neighbors fighting over the right to claim the reward shred one of them to pieces. Macy's wasn't ready to give up, though ---until 1932, whena balloon wrapped itself around an airplane's wing and sent it into a tailspin. (The pilots of the plane weren't harmed; the Tom-Kat balloon, on the other hand, suffered serious injuries.) That incident put an end once and for all to the balloon-releasing scheme. Nowadays the balloons are deflated and brought back to New Jersey.

Sinclair Oil's DINOisno "Jurassic World" dinosaur. Heck, he's not even "Land Before Time"-level dino. Macy's throws it way back this Thursday, includingthe bright green Apatosaurus inthe parade for the first time in 40 years, just in time for the oil company'scentennial. 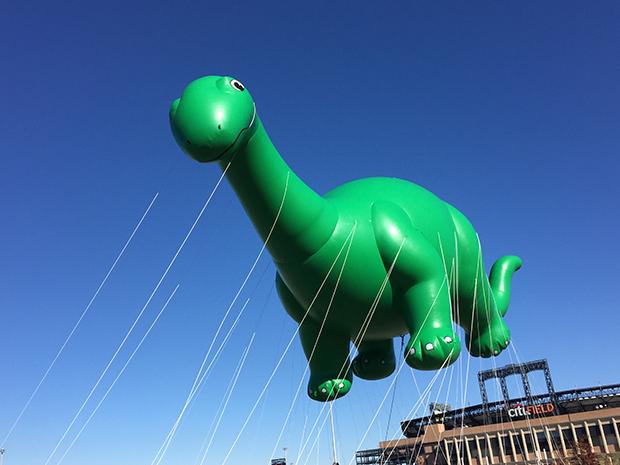 Ronald McDonaldislovin' it. The fourth balloon incarnation of one of the creepiestcompany mascots ever willjauntily march along the parade route this year in honor of McDonald's 60th anniversary. 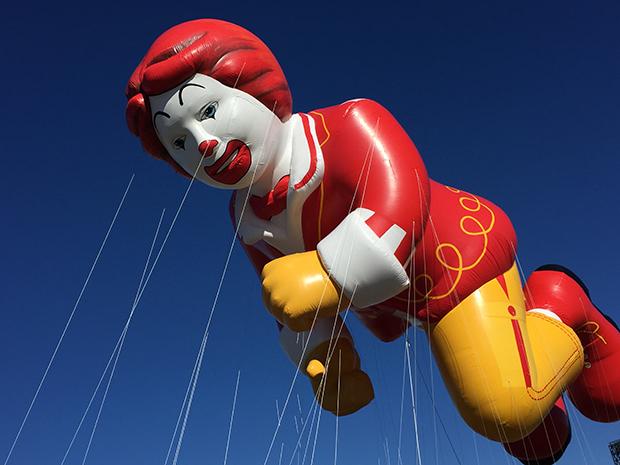 Angry Birds' Redis making his first appearance in the Macy's Parade this year because "The Angry Birds Movie" hits theaters next spring. WhileI generally do not support movies based on video games that lack a comprehensive narrative, this movie does promise to explain why these birds are so incredibly angry. And it has one of the best casts ever assembled, includingDanny McBride, Maya Rudolph, Jason Sudeikis, Bill Hader, Peter Dinklage, and Tony Hale. 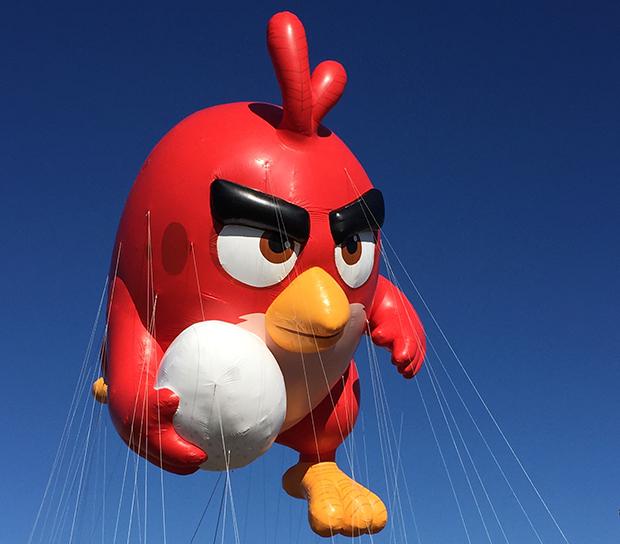 With a new Ice Age movieout next summer, and a new Ice Age short playing with the Peanuts movie right now, it's no surprise that Scrat and his acorn finally got invited to the Macy's Thanksgiving Day Parade party. Fifth film's the charm, Scrat. 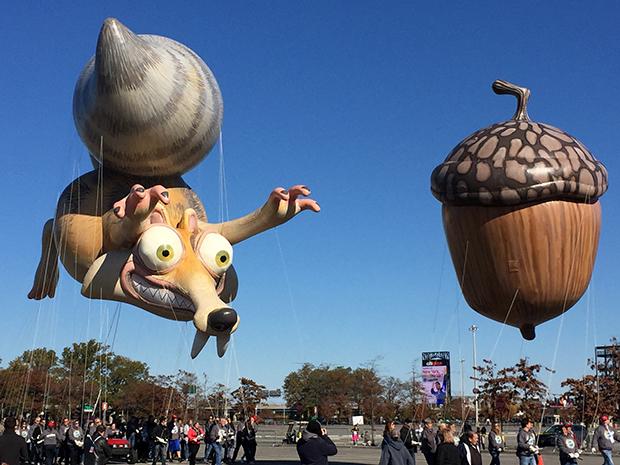 Ice Age's Scrat and his Acorn
(courtesy of Macy's)

Who would you like to see floating over Sixth Avenue? Tell us in a comment below. And have a happy Thanksgiving.