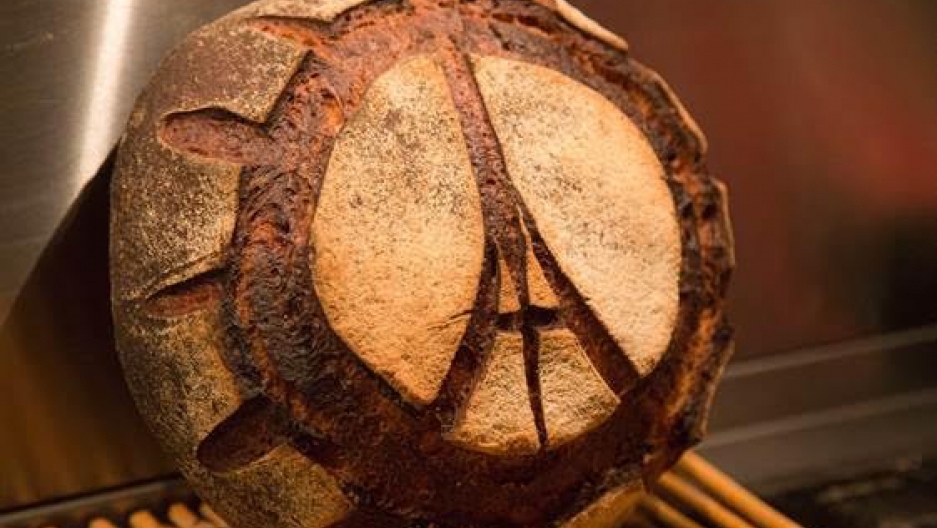 The now iconic Eiffel Tower peace symbol on a loaf of French bread.

Image by Thierry Delabre, a baker in Paris.

And you can bet that on most of those restaurant tables was that iconic staple of French cuisine — bread.

“It represents ideas that are the antithesis of what the terrorists represent. Bread as humanity, bread as sustenance, bread as people coming together,” according to Sam Fromartz, author of In Search of the Perfect Loaf: A Home Baker’s Odyssey.

When I first spoke with Fromartz more than a year ago, his book had just been released.

I met him in the kitchen of his Washington, DC, home, where he was busy scraping and kneading dough, then shaping it into baguettes.

“My mother is Japanese American, and my father is Jewish,” Fromartz told me. “I like to say that I grew up with a rich relationship with starches, because my mom would make rice, and my dad always had to have bread on the table.”

“We didn't really have a low-carb diet,” he added with chuckle.

But he told me that he never wanted to write about bread-baking. It was his hobby, his way of blowing off steam.

Then the economy went south a few years back, and his regular sources of freelance work dried up.

Suddenly, he was on the hunt for stories to sell. And then he thought: I've always wanted to go to Paris and learn how to make the perfect baguette.

He sold the idea of "American baguette baker in Paris" to a travel magazine.

Then he reached out to friends in Paris, and eventually found a baker willing to take him on and show him how it’s done.

Three weeks later, Fromartz woke up before dawn in a Paris hotel.

“I dressed in my baker's whites, and I went downstairs to the lobby of the hotel, and the night clerk was just shocked to see me, and he was wondering what I was doing, and I mumbled something about a boulangerie, and I went out into the night air.”

Fromartz says the streets were completely empty, but as soon as he got to the bakery, he could see lights and smell the bread baking. A young baker named Thomas was there, working away, music blaring.

But there was a potential problem. Fromartz didn’t know much French, and Thomas didn’t speak a word of English.

In the end, the language barrier didn’t matter.

“The thing about baking is that it's so tactile, so informed by the senses. You learn more by feeling the dough, and observing what somebody is doing than you would learn by somebody explaining it to you. I like to say that I got fluent in the language of bread.”

Building on the success of his Paris trip, Fromartz decided to visit other top bakers in Europe and across the United States. He learned all about ingredients and techniques.

And that's how Fromartz’s book came to be.

By now you’re probably thinking, “So why didn’t you write up the story a year ago?”

Excuses? Yeah, I got a million of them. Besides, sometimes a good story, like a good dough, needs time to develop.

Anyway, the truth is that after the Paris attacks a couple of weeks ago, I remembered Fromartz and his book. I really wanted to ask him how his baking friends in Paris were dealing with it all.

“I would say that within 24 hours of the attacks, I immediately began to see all these pictures on Facebook of people posting breads with symbols of the Eiffel Tower in the iconic peace symbol,” Fromartz told me on the phone.

He said that the man who edited The Encyclopedia of Bread in France, which is not a small book, had been posting about it online.

“He expressed a lot of anger in his post, but he also said he felt bread was the way to fight back, because bread is about humanity, about nurturing, about people coming together.”

“You know bread really is this iconic cultural symbol in France. So I think it does have importance in times like these. And the other important point that he made is that it belongs to everyone.”

And he means everyone.

“If you go into the baking rooms in Paris, invariably you'll see a lot of North Africans — Moroccans, Algerians. These are world class bakers. It's a craft that knows no boundaries, and I think what these bakers have been expressing is that this bread unites them against all that these terrorist attacks represent.”

Sam Fromartz said he has no doubt Paris will weather this crisis, and that there will be plenty of excellent baguettes to help.

The city's bakers, he told me, aren't going anywhere.